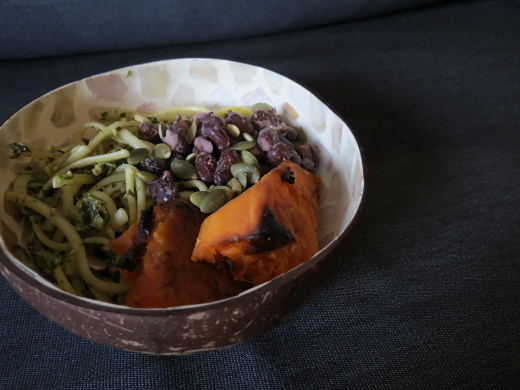 We had a big chunk of pumpkin leftover from our most recent veggie box and, after considering a few old favourites, decided it was time to bust out a new recipe. The bowls in Isa Does It have proven pretty successful so far, so when we discovered this recipe on a scan through the index, we were sold (added bonus: it used up a wilty bunch of coriander also leftover from the veggie box).

Like the other bowl recipes, there's a fair few components - you're baking pumpkin, cooking pasta, heating up beans and making a spice paste - but none of them are very complicated. The issue is more the mess you leave behind than the difficulty involved in throwing it all together. And the results are definitely worth it - the garlicky chimichurri proving to be a surprisingly perfect accompaniment to the sweet, roasted potato, with the beans and pasta adding some bulk and protein.

We went back for a second round on this - the spice paste recipe makes much more than you'll need for one dinner - and it worked just as well with roasted carrots as with pumpkin. We've had nothing but good results from Isa Does It and this just adds to my resolution to go pawing through it for more ideas.

~1kg pumpkin, chopped into big chunks (you don't need to peel it)
250g linguine (ours was a quite passable batch of gluten-free linguine leftover from one of Cindy's field trips)
2 cans black beans

Preheat the oven to 220°C. Pop the pumpkin on a lightly oiled baking tray and bake for 45 minutes or so, until completely soft.

While the pumpkin is baking, make the chimichurri in a food processor. Start by blending up the garlic until it's finely chopped. Add the pepitas and grind them up into small crumbs. Throw in the rest of the ingredients and blend into a thick puree.

Drain the beans and heat them up in a small saucepan

Prepare the linguine as per the instructions - you want it to be the last thing that's ready.

Drain the linguine and stir through 1/2 of the chimichurri paste (the noodles' heat will take the sting out of the garlic).

Assemble your bowls with the pasta, beans and pumpkin, topped with a few extra scoops of chimmichurri and garnished with pepitas.
Posted by Michael at 11:25 am

Labels: Isa Does It, Vegan or vegan-friendly