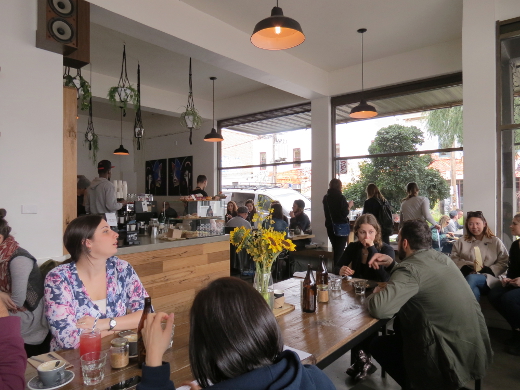 From Steam Junkies to Addict - I'm not sure I care for cafes naming themselves after compulsions but it seems I'll eat their brunch. Addict has the typical trappings of an inner north cafe - a communal table and drop lights, longnecks for water pitchers and a small queue. Luckily for us, the 10 minute wait estimated by the waiter was more like 2. It was barely enough time to stare hungrily at the doughnut display before we were seated at a sunny window bench.

The Addict menu has abundant Vs and GFs, but doesn't offer much in the way of information or eating for vegans. The coconut & lychee porridge and the citrus-spiked chia pudding might pass muster, but conferring with staff would definitely be needed. By contrast, the vegetarian options are varied and take up half the menu, from buttermilk pancakes to corn fritters and a mega Go Green breakfast. 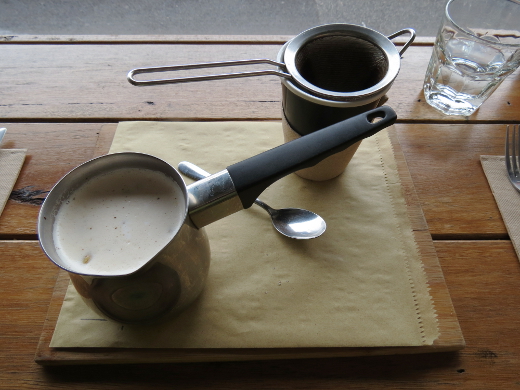 The Chai Boy Latte's ($4.50) paraphernalia took up most of my table space. For all its name-dropping and bench-hogging it wasn't all that memorable, mildly spiced and only briefly steeped. 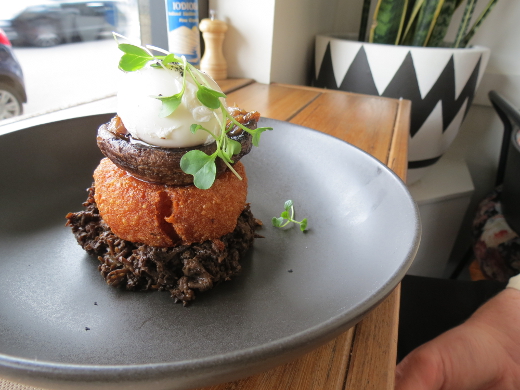 The food was a long time coming - even slowpoke Cindy here had sipped the last of her latte before it arrived. Michael ordered the oft-blogged potato hash and mushroom duxelle with roasted field mushroom, a poached egg and caramelised onion ($18). It was compact and quickly consumed, but very rich and dominated by the mushroom flavours. As I continued eating my meal, I caught Michael staring longingly at the corn fritters left by a couple of ladies further along the bench. 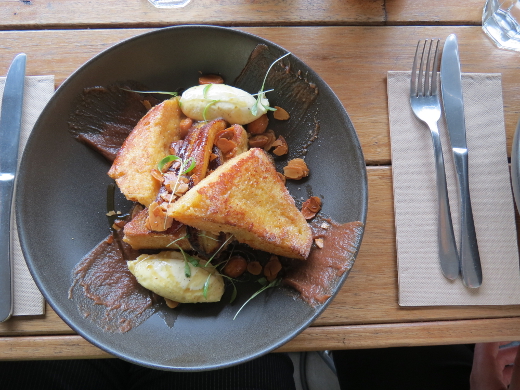 Although our friend Will had particularly recommended the pancakes, I passed over them for a blackboard special of cinnamon dusted brioche French toast, date and peanut puree, caramel banana, vanilla mascarpone, sweet and salty nuts, and maple syrup ($17). I was served a whole lot more fried and sugar-rolled brunchtime bang-for-my-buck than Michael was! The brioche was only lightly battered, and dusted to resemble cinnamon doughnuts, the bananas were nearly collapsed under their caramelisation, and the garnished macadamias were deeply toasted. It was spectacularly over the top, and I ate it all. 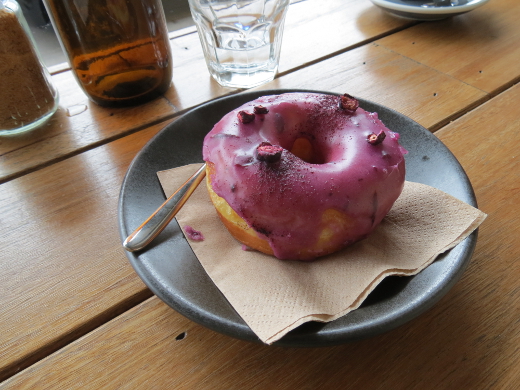 Michael should not have been surprised that I could manage only a cursory taste of the doughnut we ordered afterwards. It was all Krispy Kreme puff, without cakiness and (to my disappointment) without any tanginess to its berry-tinted icing. 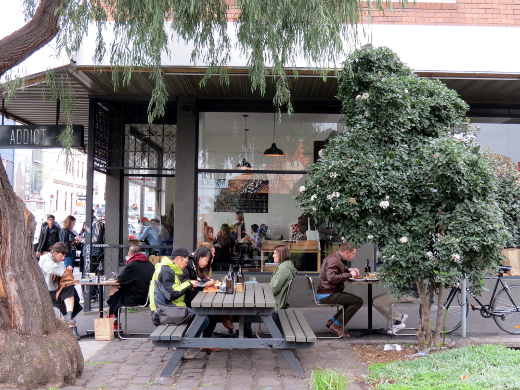 The staff were friendly and capable but there seemed too few of them; we were left waiting for long periods to order and receive food. What the Addict kitchen made was very, very good - fancy but well-composed, a smidge pretentious yet ultimately satisfying.


Accessibility: There's a shallow ramp on entry. Tables inside are standard height and crowded in, with a mix of chairs and stools. We ordered at our table and paid at a medium-high counter. We didn't visit the toilets.
Posted by Cindy at 8:23 am