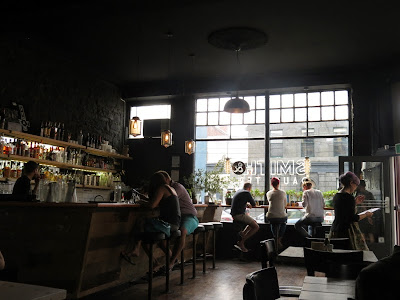 I know, I know, this blog is in danger of needing a new name: something like 'Cindy and Michael go to Smith & Daughters' or 'Smith & Daughers R Us', but we really couldn't resist one more visit to suss out the weekend brunch options. 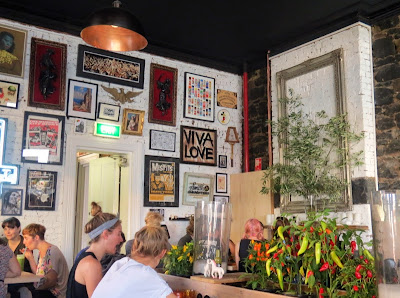 The space looks even slicker in the daytime - the chilli plants bursting with colour and the windows flooded with light. Through the week, Smith & Daughters have the same menu for lunch and dinner, but come the weekend they pull out the brunch options, offering up vegan versions of omelettes, French toast and more. They're really pushing their fresh juices too, with a mix of green juices, citrussy options and a tropical juice plus smoothies and a bunch of breakfast cocktails all using freshly squeezed produce for added pep. We had a juice each ($7.50 small/$12 large) - the easy green for me (kale, celery, cucumber, spinach, mint, lime, apple, lemon and ginger) and en rosa for Cindy (pink grapefruit, orange, pineapple, red grape, apple and watermelon). Both were great, although I did have some regrets about my failure to order one of the four breakfast cocktails instead. Next time. 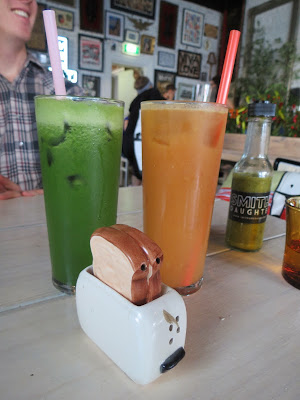 I was always going to order the breakfast burrito, stuffed with scrambled tofu, chunks of house-made chorizo, black beans, garlic kale and chipotle cashew cheese, with a side of lime and guacamole ($18, or $15 without the cashew cheese).

I must confess, my first thought when this came out was, "It's a little small." It turns out that I didn't have anything to worry about - the combination of fillings was just that, incredibly filling. I worked hard to finish it and didn't need to eat again for hours. Oh, and for bonus points: it was incredibly good. The scrambled tofu was excellent, with chunks of chorizo and cashew cheese bursting through. Their house-made hot sauce is great too - tangy and spicy without overwhelming the other flavours around it. I started off pondering whether this could be $6 better than Trippytaco's tofu burrito and finished it ready to recommend it to everyone I know.

Cindy somehow resisted the lure of the French toast (served in spiced wine syrup with poached quince, $16) in favour of the horchata rice pudding (house made horchata and grilled pineapple, $15). Tasted separately, she found the pudding dense and plain and the pineapple sour, but they worked much, much better as a team. 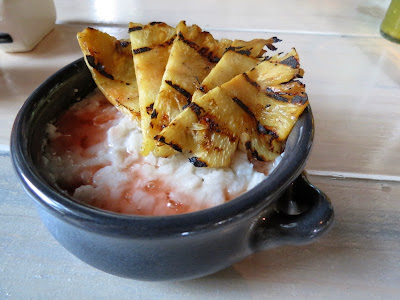 The coffee (Wide Open Road) was excellent and can be done with soy, oat, coconut or coconut/almond milks. The service as friendly as ever (although they clearly know who we are now, so we may not be getting an objective experience) and a bit more in control without the heaving crowds of the nighttime sittings. We had a great time on our Sunday morning. Prices are getting into the higher range that we see around town, but the menu items are undoubtedly the most interesting for veg*ns in that bracket. I'm dying to try the omelettes and pretty keen for some brunch boozing, so I reckon there's at least one more Smith & Daughters post in our future.

You can read our summary of the restaurant launch here and a dinner we paid for here. There are a few more launch posts popping up - see Gastronomical ramblings and The Very Very Hungry Caterpillar, while The Lentil Institution somehow snared a quick meal without a booking on a packed-out Wednesday night.
____________


Accessibility: The entry is flat and narrow and the tables are pretty crowded. The interior was a bit quieter and brighter during the daytime. Toilets were located up several steps, were gendered and of standard dimension. There's full table service.
Posted by Michael at 7:31 am