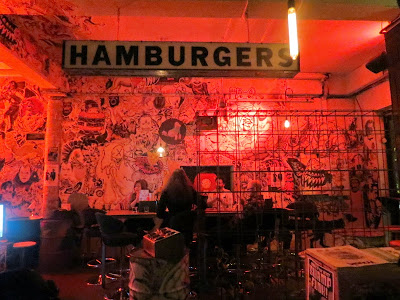 The opening of B.East in 2012 smacked of the worst kind of hospitality cynicism - Baba, a fancyish Middle Eastern place that we quite enjoyed, was closed down by the owners so they could jump on the Americana/burger bandwagon with the B.East. We checked it out early and were pretty unimpressed - the whole exercise felt a bit half hearted and trendy. Still, it seemed to be a success, with crowds of people there whenever we wandered past. We even revisited at one point to try the tempeh burger they were offering up for vegans, but it was a pretty dull rendition and we'd more or less cast it aside as somewhere we'd never get around to blogging. 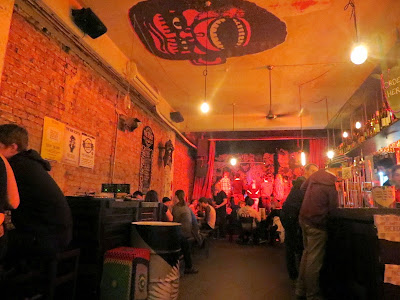 At least until Jess McGuire tweeted about how amazing the harissa mock chicken burger was. So we had to make one more trip. We managed to coincide our return with Jess' excellent pop culture trivia (at which we failed pretty dismally), which meant that the whole place was jammed with people and very noisy - it's as much pub as restaurant, and really not somewhere you'd go for a quiet relaxed meal.

The menu's changed a lot since we visited - there's a couple of veggie burgers, a slider, a couple of snacks and a range of fries. I really just wanted to focus on The Morrissey (mock fried chicken, sweet corn relish, lettuce, tomato, jalapeno salsa on rye - vegan, $13), but Cindy thought we should broaden our selection a bit. 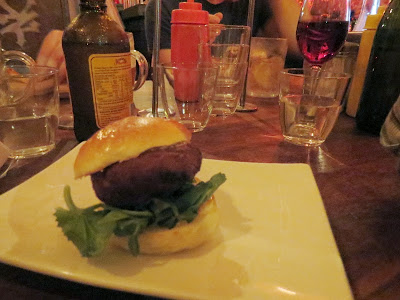 This wasn't very memorable - there wasn't the blue cheese richness I was hoping for or any real kick from the horseradish in the aoili. The fritter was fat and fried, so it wasn't a complete disappointment, but I wouldn't order it again.

Instead, I would order The Morrissey. 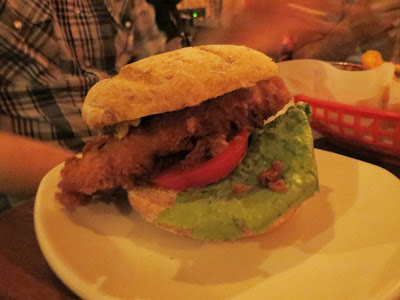 This was the bomb - the patty was huge and had great crispy batter around fatty mock chicken. The bun was fresh and manageable enough (although the whole thing was too big to really eat neatly) and the sauce was really hot and spicy. Four of our trivia team tried this and everyone was very enthusiastic - definitely one to check out, and not ludicrously priced at $13.

The $13 doesn't get you any fries though - you can pay $3.50 to get a side with your burger or you can do what we did and get a full serve ($6.50 plus $1 if you want a dipping sauce instead of just the table ketchup/mustard). The fries were excellent - super crunchy and salty. 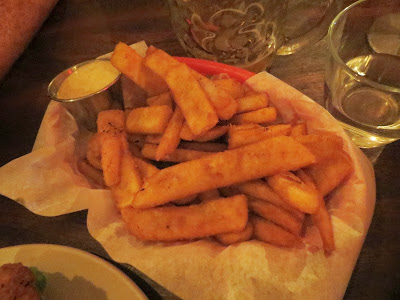 Despite our initial misgivings, the B.East hits the mark pretty solidly for a boozy Tuesday trivia. There are cheap Holgate pints, fantastic fries and one of the best mock chicken burgers around. We just need to study our John Hughes movies and Beyoncé-related trivia before we return.
_____________

The B.East has a fair bit of blog coverage - Skinny Glutton, The Burger Adventure, the best bloody burgers, One Fat Cow, thehangrybitch, Foodie About Town (twice), Where in the World is Kristine?, Food of the Soul and Look, See, Food! liked it, while there were much more mixed reports from Ichigo Shortcake, Let's Get Fat Together, two munch, I'm so hungree, EM'S BURGER QUEST, Melbourne Din(n)ing Blog and The Chicken Scene.
_____________
The B.East
80 Lygon St, Brunswick East
9036 1456
menu
http://theb-east.com/

Accessibility: There's a wide entry with a ramp into a pretty crowded interior (at least on trivia nights). It's dimly lit and noisy and you order at a high bar. The toilets are on the same level through a narrowish corridor by the kitchen and are gendered and quite large (although I can't remember seeing a specifically accessible cubicle).
Posted by Michael at 9:52 am