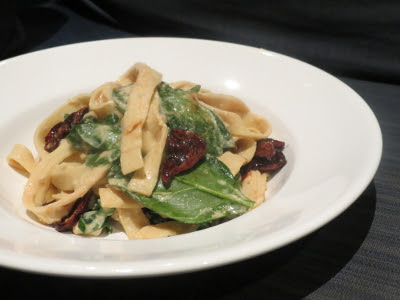 This Friday night pasta dish is a rearrangement of some other favourite recipes on this blog. I guess it's a little like carbonara, except that I ignored the eggs in our fridge and made a cashew-based vegan sauce, and smuggled in a bunch of spinach.


Several hours (up to a day) before you want to eat this meal, marinate a generous handful of dried beancurd pieces in a bacon marinade.
When you're 20 minutes away from wanting to eat, bring a large pot of water to the boil. Add 500g fettuccine, cook until tender and drain.
While the water is boiling and the pasta is cooking, wash a large bunch of spinach and remove the leaves from the stems, discarding the stems.
Blend up a batch of Hurry Up Alfredo sauce, replacing the 3 tablespoons tamari with 1 teaspoon 'chicken' stock powder. Saute the marinated beancurd in a frypan over medium heat, adding a little extra marinade and being careful not to burn anything.
Once the pasta is drained, return it to the pot with the spinach leaves, tossing to combine, so that the heat of the pasta wilts the spinach. Pour over the alfredo sauce and stir to combine. Sprinkle in the beancurd 'bacon', tossing it through lightly so that it doesn't discolour the sauce too much.
Scoop into pasta bowls and eat, eat, eat.
Posted by Cindy at 9:02 am