We had friends for dinner on a chilly Sunday night and Cindy had the perfect PPK recipe bookmarked - doubly perfect given our morning was taken up mushrooming on the Mornington Peninsula. 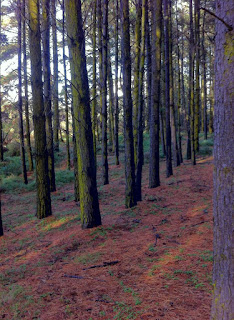 Sadly we didn't forage quite enough mushrooms for this stew recipe, but we had a good stash of button mushrooms on hand to cover the deficit. It's a very hearty recipe - rich with gravy, beans and mushrooms, but really topped off by the glorious dumplings on top - perfect for a cold winter's night. The stew itself has a nice flavour - peppery and herby, with some sweetness from the carrots and a bit of a celery tang. It's really all about the dumplings though. There's a bit of time involved, but it's not particularly complicated. Probably best to leave it for a weekend. We took a few shortcuts - swapping in a mushroom stock cube for porcinis and skipping all the dough kneading for the dumplings - the dish didn't seem to suffer for it. 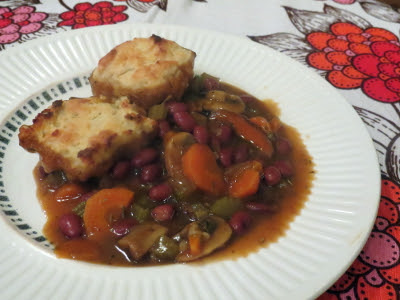 Heat the oil in a large saucepan and throw in the onion with a shake of salt. Cook for about ten minutes, until the onion is soft. Add in the garlic and cook, stirring, for another minute or so.

Add the mushrooms, celery, thyme and rosemary. Cook for another ten minutes or so, until the mushrooms start to cook. Throw in the carrots, stout, tomato paste, pepper and salt and bring the mix to the boil. Boil the pot for about eight minutes, until the liquid has reduced substantially.

Add in the mushroom/stock mixture and bring it all back to the boil and cook for another five minutes or so.

Gently pour in the flour mixture while stirring the stew.  Cook for about five minutes until the stew starts to thicken up nicely.

Kill the heat and add the beans, preheat the oven to 220°C and get cracking on the dumplings.

Combine the mashed potatoes with the oil and water and stir well.

In a separate bowl, stir together the flour, baking powder, sugar and salt.

Make a well in the middle of the flour mixture and pour the potato mixture into it. Mix together to form a loose dough.

Transfer the stew to a baking tray and then dollop big spoonfuls of the potato mix on top.

Pop the whole thing in the oven and then bake for roughly twenty minutes - the dumplings should be nice and brown on top and deliciously soft in the middle. Let it all sit for ten minutes to cool and before serving.