With another trip to the Queen Vic Markets lined up for Saturday morning, Cindy and I had a quick brainstorm of city breakfast ideas before inevitably settling on a return visit to Mister Close. Our first trip had been such a success that we thought we should go back and sample some more of their wares.

Things were humming along a bit more than on our first trip - disturbingly, the place was still not as full as Starbucks next door - but they had a decent crowd in by 11am. The menu is unchanged but we still had plenty of things we wanted to try. In particular Cindy was keen on the ricotta hotcakes (with rhubarb and passionfruit butter, $15.50), though for some reason they were unavailable. Instead she reluctantly went for the chocolate French toast (with maple and marscapone, $13.50). 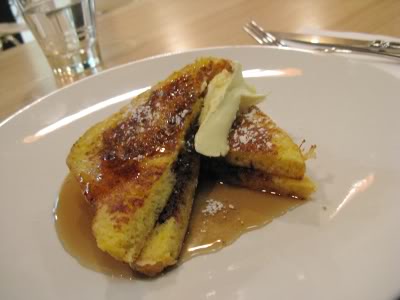 I was expecting the actual bread to be chocolate based, so the reality of this was more restrained than my mental image. Still - chocolate spread sandwiches made of eggy fried bread and drowned in syrup and marscapone is a pretty indulgent start to the day. The spread was melted chocolate (not Nutella as Cindy thought) and this was as sweet and desserty as it looks. Cindy enjoyed the bread and chocolate but the left most of the syrup on the plate.
I stuck with my typical savoury approach to breakfast with the Amalfi eggs (scrambled with fried onion, tomato, chopped olives, shaved parmesan and truffle oil). 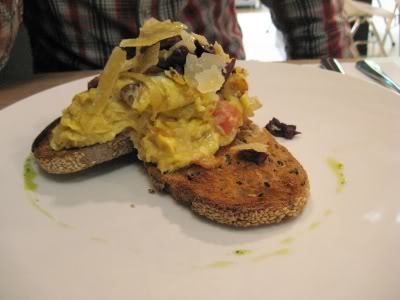 This had kind of the reverse problem to Cindy's - between the olives and the truffle oil it was very, very savoury. It didn't quite have the balance of my dish last time, but it was still a decent enough start to the day.

The coffees were good again and the service was as friendly and efficient as last time. We were a bit less wowed by the food this time around but I'd still recommend Mister Close for people trying to hunt down a weekend CBD meal.
____________
Since we first visited: Two Munch, Caffeine City, Checks and Spots, A Bit of Butter and Melbournian Girl have given Mister Close the thumbs up, while Food Cautious and That Jess Ho were a bit less impressed.

Shop 13, Midtown Plaza, 246 Bourke St, CBD
9654 7778
veg brekkies $4.5 - $18.5
http://misterclose.com.au
Accessibility: Mister Close is step-free and there's plenty of space between tables. Ordering and payment happens at the table. We didn't make it to the bathrooms.
Posted by Michael at 8:32 pm