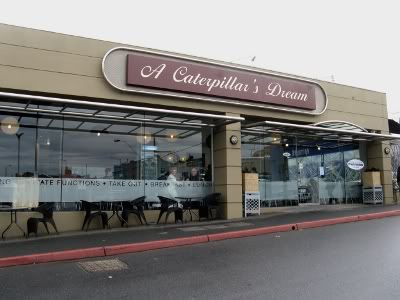 The Moody Noodles kindly gave us a lift out to Kew to check out A Caterpillar's Dream for lunch. This vegetarian cafe is just a couple months old and is rumoured to be run by the same family as Brisbane's Kuan Yin.  All four of us love the Brisbane eatery so we had high hopes for this new venture. 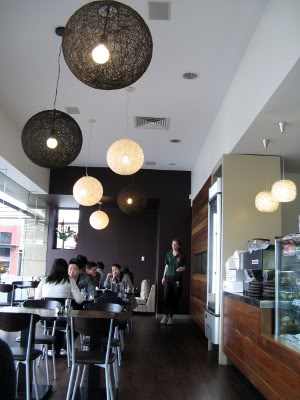 We were surprised at the vastly different ambience - A Caterpillar's Dream has a large and light space at the end of a strip mall, nothing like the dim Kuan Yin premises that's squeezed into Chinatown.  The menu bears little more than a passing resemblance either.  Though there's still much mock meat, it's just as likely to be tucked into a sandwich or stirred through pasta as it is to be served Chinese-style with rice. ACP also boasts two large display cabinets stocked with all manner of pastries, cakes and other sugary delights. 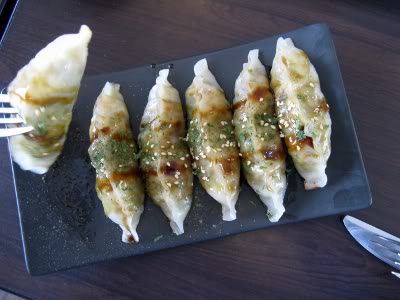 Toby, Michael and I shared a plate of fried dumplings ($7.90), and they were better than average. 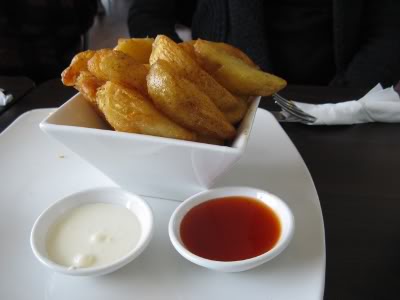 K let us repeatedly sample her bowl of potato wedges ($5.90), which arrived with sweet chilli sauce and (non-vegan) sour cream. They had lovely fluffy interiors, but we couldn't taste a lot of the promised spice mix (salt flakes, black pepper, thyme and paprika). 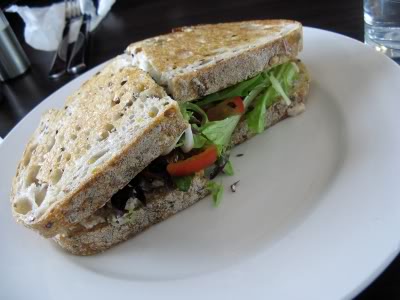 I tried out their tuna salad sandwich ($10.80), which contained a small amount of veggie tuna, celery, dill, cucumber, cream cheese, then plenty of tomato and fresh greens.  I liked that they didn't overdo the mock meat or condiments; this was a pleasantly light sandwich. 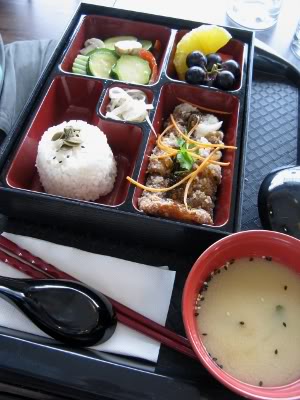 With all our Kuan Yin expectations, Michael was hanging out for a bento box ($14.50), which comes with steamed rice, pickles, cooked vegetables, miso soup, fruit and a choice of veggie meat.  His Thai spicy duck was hot, crisp and not greasy, though perhaps lacking in Thai spices. The bigger disappointment was the vegetables, which had seemingly been cooked without any seasoning at all.


The cooks at A Caterpillar's Dream have given some thought to dietary requirements, with vegan and gluten-free options clearly marked throughout the menu and on the specials board. However both of K's dishes arrived with non-vegan condiments in spite of their vegan labelling. The wait staff were cheery and tried to be helpful but knew no more than what was printed on the menu. It's also a shame that a vegetarian cafe offering such a large variety of sweets seems to have only one vegan-friendly item.


A Catepillar's Dream is a nice spot for lunch if you find yourself hanging 'round Kew Junction. However, I'd recommend that anyone with dietary needs speak up while ordering to ensure a suitable meal.


Accessibility: Looks good - flat wide entry, plenty of space between tables, table service and payment at a low counter. We didn't visit the toilets.
Posted by Cindy at 2:46 pm