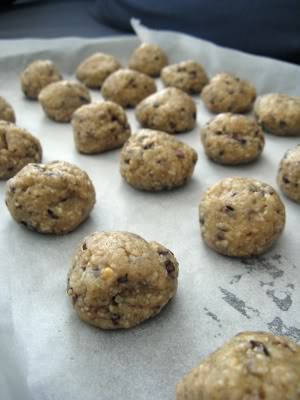 Our first attempt at tortillas was fraught but ultimately successful.  Thanks to some twitter tips and encouragement I felt game to invite five friends over for a lunch of soft tacos.  This time I tried using a tortilla press, on loan from tortilla veteran K.  While I don't think the tortillas I made with it were better, they were certainly quicker.  I punched out a couple of dozen in much less time than it took to fry them, while our guests settled in on the couch with a bowl of cashew crack.
For dessert I'd been planning just to offer fresh pineapple and coconut ice cream.  Michael was not impressed by the local pineapple stocks that morning so we gave them a miss and almost cancelled dessert.  But what with me always having a few recipe ideas stashed in the back of my mind, I sorted out a quick and easy alternative before Michael had even returned from the shops.  We tried the original entirely-raw version of these cookies at a Tex Mex-themed potluck a couple of years ago.  Pip was also there and photographed the recipe, which I went on to bookmark for future use.
On this day I made a few substitutions to ensure these cookies were vegan, gluten-free, and used only ingredients I had in my pantry.  This rendered them less raw but no less tasty.  I used more peanut butter and tahini than was sensible (perhaps I misread teaspoon for tablespoon?) so the mixture was a bit sloppy.  A half-hour in the fridge before rolling, and then more fridge storage after sorted that out.  As a consequence they were immensely rich, with a fudgy texture and pleasing crunch from the cocoa nibs.


In a food processor, grind the macadamias, coconut and buckwheat flour to a coarse powder. Add the dates and process again until they're evenly distributed throughout the mixture.  Next in goes the salt, agave, tahini and peanut butter for more processing; you should now have a very moist dough.  Add the cocoa nibs and process very briefly, just enough to mix the nibs through.
Transfer the mixture to a bowl and refrigerate it for at least half an hour to firm up.  Take about 2-3 teaspoons of dough at a time and roll it into a ball, placing the balls on a tray.  Store the balls in the fridge until serving time.
Posted by Cindy at 12:09 pm