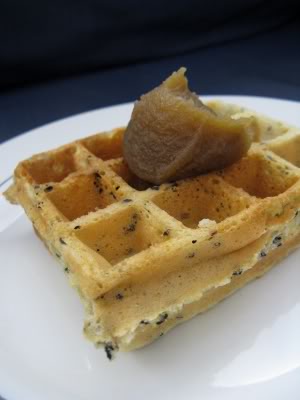 I've had a jar of kaya in the cupboard for a little while now.  I kept putting off opening it until I had a really good idea for how to use it.  Last month I got it into my head that the kaya was meant for waffles and mused for some time over complementary waffle flavours.  Eventually I decided that tahini might make a pleasing and slightly bitter foil for the sweet, sweet jam.
I whisked a few tablespoons of tahini in my standard (vegan) waffle batter and a few tablespoons more of black sesame seeds.  They didn't impart much extra flavour to the waffles but this was probably for the best; the kaya was much richer than I remembered and any more oily tahini would probably not have improved matters.
I confirmed one thing though - kaya is perfect on waffles!

(Any other ideas for a kaya-friendly waffle flavour?)
Posted by Cindy at 10:28 pm