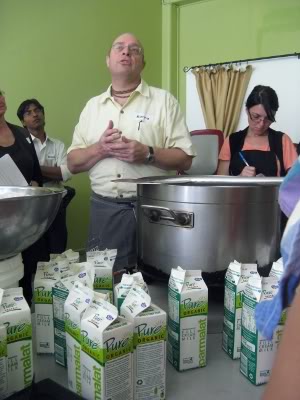 Recently we had the good fortune to attend a cooking class led by Kurma Dasa. I say 'good fortune' because our places in the class were a Christmas gift from Michael's mum Robyn. Kurma was a huge influence on our early days of vegetarian cooking, with Kurma's Vegetarian World Food being one of our first vego recipe books. (It was a gift too, from Michael's brother! You can find a few of those recipes in the archives here.)
Kurma's life as a chef is tied very closely to his involvement in the Hare Krishna movement and thus this class was held at Gopal's restaurant, where Kurma was head chef for many years. The foods we prepared, following the theme "Classics from the Subcontinent", were very much like the dishes I've enjoyed eating at various Krishna restaurants over the years.
As you can see above, our class began with litres and litres of milk. We'd be making panir! 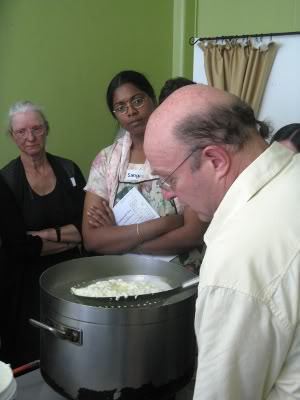 This fresh cheese combines a lot of milk with a small amount of acid to create the curds. From there it's all about draining the whey from the curds, compressing the curd for at least an hour so that it forms a firm ball of cheese. Though most of the panir was destined for a curry, Kurma chopped up a little of it for us to taste as soon as it was ready. Drizzled with olive oil and lemon juice, seasoned with salt and pepper then sprinkled with fresh parsley, the still-warm cheese was incredible. I would make it again at home, just for that kind of snacking. 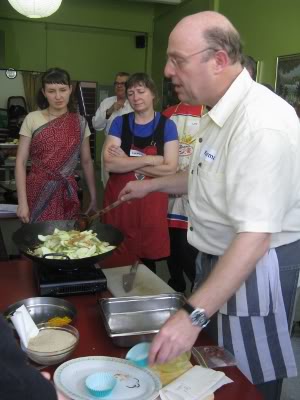 This is the hot and sweet apple chutney. For the 'hot' part, Kurma brought in some of his home grown habaneros (which I'd previously read about on his blog). He said that these were the second hottest variety in the world and that chutney should be "too hot to bear, yet too sweet to resist"! This chutney solidly hit both marks - it was terrific spread so, so sparingly on the pakoras. 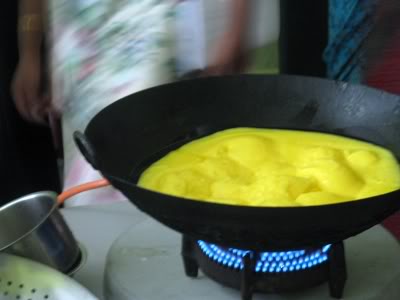 You'll see the pakoras later in the post but here's the massive quantity of ghee that we cooked them in, which we started heating up around this time. 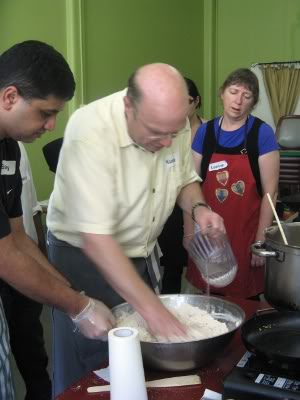 Next Kurma showed us how to make chapatis. These unleavened breads need no more than flour and water. 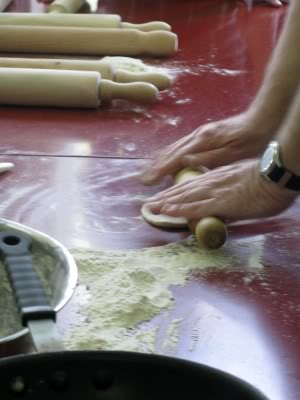 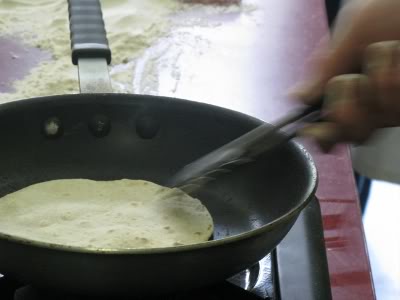 First they're fried in the pan... 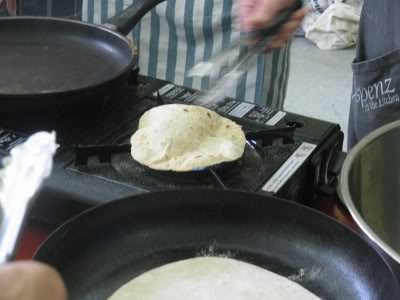 ... then directly on the flame where, if you're lucky, they'll puff up like starchy balloons. 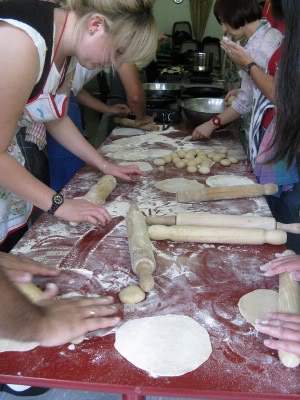 There was plenty of space and dough for us all to have a go. 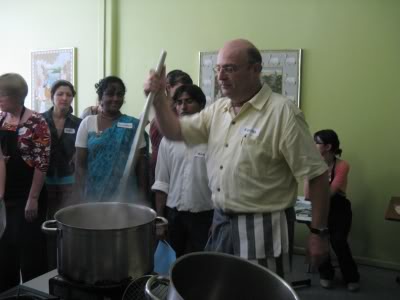 Kurma moved on to some of the other dishes - toor dal soup, lemon rice, matar panir, raita and then halava for dessert. 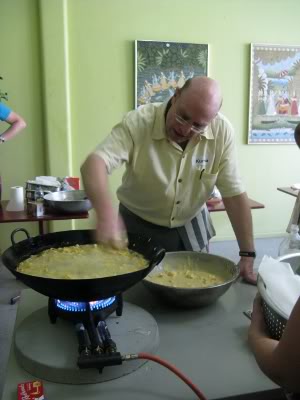 The absolute last thing we cooked was the pakoras, battered chunks of eggplant, cauliflower and potato. 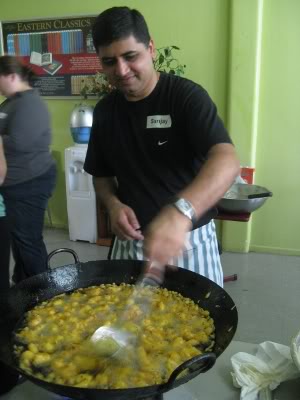 While I was keenest to eat the cauliflower ones, to my surprise the eggplant pieces were my favourite. 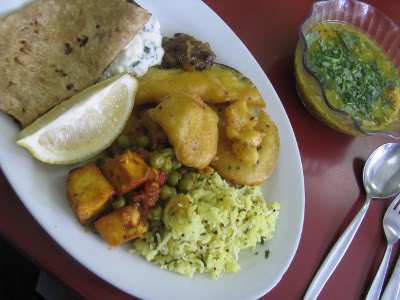 After a 5-hour marathon of chopping, cooking and note-taking, we were all desperate to dig in. It was a feast well worth the effort! 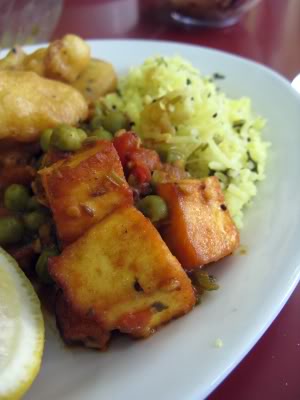 The panir came up nicely in its tomato gravy and the lemon rice - dotted with cashews, mustard seeds and herbs - was a lovely change from the steamed rice I usually eat. 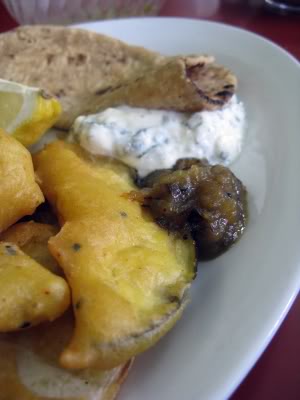 The pakoras and chutney were a deadly-delicious combination, and the raita was a cooling reprieve. 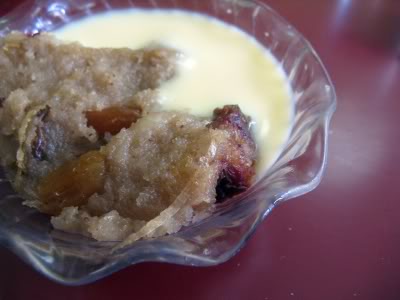 While Michael returned to the mains for more, I focused on dessert. This semolina pudding is great comfort food, though I was surprised at how much ghee went into it! Halava might make it onto our table a few times this winter.
This cooking class was an altogether different experience to the one we attended at LaZaT a couple of weeks earlier. With around 25 students attending over 5-6 hours, Kurma's class was much larger and longer. With more dishes and more people, the tasks were divided amongst us instead of each of us attempting everything for ourselves. Nevertheless, there was ample opportunity to observe the processes involved and question Kurma. He knows a lot about food and I learned much from him in person that I couldn't have just by reading his recipes.
Posted by Cindy at 7:58 pm