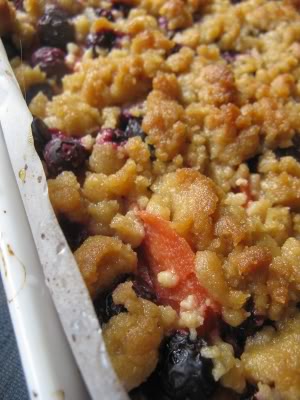 There've been a couple of recent incidents of edible generosity at my workplace, one in the form of free-for-all quinces.  I waited a polite few hours for others to help themselves but keenly took three of them home that night. 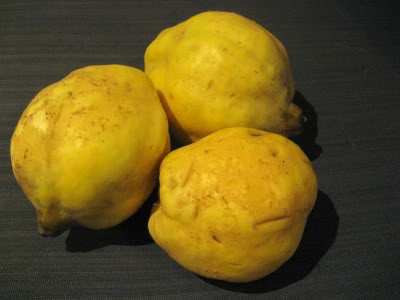 For recipe ideas, I headed to Cook Almost Anything.  Over the years I've been reading it, Haalo has posted quince recipes almost every time it's come into season.  We had a weekend trip with a few friends planned and I decided to reach back to the 2006 archives and make the quince and blueberry crumble cake to share around. 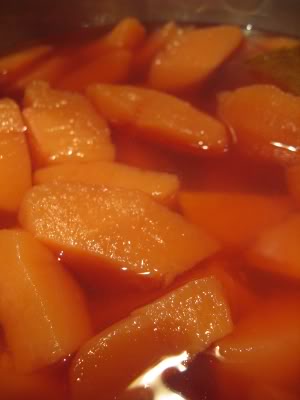 The first step is poaching the quinces.  There's plenty of warning online that you need to get cut quince flesh into acid water as quickly as possible to avoid discolouration.  And then there's the more desirable colouration you're meant to earn after the fruit's cooked.  It's all a little intimidating!  Thankfully these segments poached up nicely, with the flesh acquiring a pear-like tenderness, rosy tinge and lovely fragrance.  (A quince-savvy friend suggested later that upping the acid might have ramped up the colouring further.) 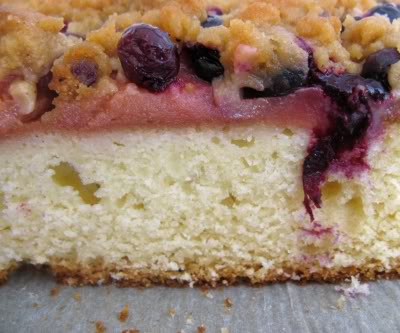 Constructing the cake itself was much more within my experience, though I'm not sure it turned out quite as nicely as Haalo's. I don't think my baking pan was large enough. (Actually, measuring it now I see that it was larger than Haalo's 23cm square tin - weird.) The cake rose unexpectedly high in the middle and I couldn't fit nearly as much fruit on it as Haalo did. (This was not ultimately a problem - the leftover fruit was delicious with plain yoghurt. Oh, and I also mixed the leftover poaching syrup with apple juice for some rather nice mocktails.)
What with all the size mismatching my cake didn't need quite so long to bake and ended up a little dry.  No doubt the higher proportion of fruit it was supposed to support would have helped with some moistness, and as it was I packed some cream to serve on the side.  I didn't hear any complaints from the crew, with some going back for second (and even third!) slices.


Start with poaching the quinces. In a very large saucepan stir together the water, sugar and lemon juice. Peel and core the quinces, slicing them into segments and dropping the segments into the saucepan (ASAP, to prevent browning). When they're all done, top up the water if the quinces are not entirely submerged and add the cinnamon stick. Bring them to the boil then turn down the heat, cover the saucepan and allow the quinces to simmer until tender (up to 90 minutes). Allow the quinces and syrup to cool to room temperature. Drain the quinces and reserve the syrup for other uses.
Next, the cake. Preheat the oven to 180°C and line a 22cm x 33cm baking tin with paper. In a medium-large bowl, beat together the butter and sugar until fluffy, then beat in the eggs one at a time. Sift the flour and baking powder in, beating gently as you go, then beat in the milk until it's all just combined. Spread the cake batter evenly into the baking pan and bake the cake until it's just set, about 20 minutes.
Finally, prepare the crumble. All this requires is putting the ingredients in a food processor and blending until combined.
When the cake is cooked, arrange the quince slices and blueberries over the top, then sprinkle over the crumble mixture. Return the cake to the oven until the crumble is browned and crunchy, 15-20 minutes.
Posted by Cindy at 10:47 pm