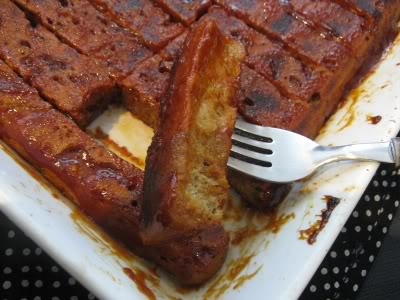 We have an American colleague spending a year at my workplace. He and his family have been making the most of their time in this part of the world, holidaying extensively throughout Australia and New Zealand as well as making numerous weekend trips around Victoria. They've also shared a little of their culture with us Antipodeans, putting on a fabulous Thanksgiving spread last November. And, when the northern springtime rolled around, they upheld their 20-year tradition of hosting a Kentucky Derby party.
Mindful that there'd be many guests and not many vegetarians, I volunteered to bring along something thematically appropriate to share.  There are a few vege-based Kentucky Derby side dishes around but the meat is clearly the bigger attraction and I was rapidly attracted to the idea of mimicking barbecued ribs.  It was then I remembered Lindyloo's smashing success with SusanV's recipe for seitan ribz.  I mentioned my plan to Kristy and Toby over dinner at Yong, and they recommended I glaze them with Vegan Dad's Memphis BBQ sauce recipe.
This was excellent advice.  The sauce is a less-than-nutritious mix of ketchup, spices, lots of sugar and, if you're going with the Kentucky theme, bourbon.  Slathered all over those chewy gluteny ribz it's sweet and a little spicy and, my hosts assured me, a pretty good match for the real deal.  Actually I knew it not to be the real Kentucky deal, because I used a mini-bar-sized bottle of whiskey in place of the not-so-mini-bar-sized bottle of bourbon available at my local bottle shop.  I couldn't imagine how I'd get through the rest of such a quantity, though I learned a thing or two about mint juleps later on.  My second transgression was to use the grill setting on my oven in place of a barbecue - a low-fuss and highly successful alternative.

The seitan, made via the gluten flour short-cut, is very easy to prepare.  Though its own flavour didn't really carry through, it was certainly a worthy vessel for the sauce.  Many party-goers hadn't encountered this faux-meat before and it elicited many guffaws, while the sauce kept people going back for a second bite.  Michael heroically went back for more bites still as the party wore on, ensuring that I could take an empty dish home with me.


First, make the sauce in a medium-sized saucepan.  Melt the margarine, then gently saute the onion and garlic in it until they're reduced and brown (this took me 20-30 minutes).  Add the remaining sauce ingredients, bring them briefly to the boil, then turn down the heat and simmer the sauce for 20 minutes.  Set the sauce aside while you prepare the ribz.
Preheat the oven to 180°C and lightly grease a baking tray.  In a large bowl, mix together the gluten flour, paprika, yeast flakes, onion powder and garlic powder.  In a separate smaller bowl, whisk together the remaining dough ingredients.  It might be difficult to keep the water and tahini from separating but be as thorough as you can, to prevent tahini globs in the dough.  Mix the liquid ingredients into the dry ingredients and knead them together lightly in the bowl for a couple of minutes.
Place the dough in the baking tray and flatten it out with your hands so that it covers the base evenly.  Slice the dough into long, thin rib shapes.  (I used a pizza wheel to make one long cut through the middle, then about a dozen shorter cross-cuts to create 2cm-wide 'ribs'.)  Bake the seitan for 25 minutes.
While the seitan is baking, push the sauce through a sieve to remove the onion chunks.  When the ribz are ready, remove them from the oven and trace over the rib cuts again.  Slather half of the sauce over the top of the ribs.
If you're using a barbecue, cook the ribs sauce-side-down on the grill and slather the remaining sauce on the top side.  Turn it once to cook the other side and serve.
If you're using your oven's grill, place it under the heat sauce-side up until the surface is bubbling and browned (be very careful not to burn it!).  Gently flip the ribs over in the dish, slathering the remaining sauce on the other side and grilling it until it's also bubbling and brown.
Posted by Cindy at 10:32 am