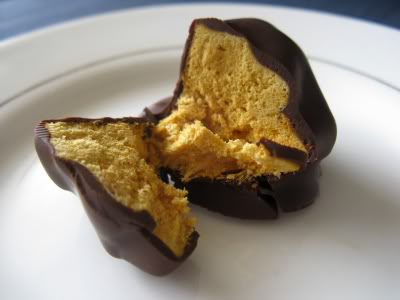 Our recent Soulmama post generated some speculation about vegan honeycomb. What's commonly called honeycomb here in Australia bears only a passing resemblance to the wax-and-honey structures built by bees - this crunchy, airy, sugary confection is known elsewhere as sponge or cinder toffee, yellow man, puff candy, hokey pokey or sea foam. In fact, I was pretty sure that this stuff doesn't usually even require honey! Indeed, the first recipe I came across was completely vegan. I guess the milk chocolate that commercial honeycomb is typically covered is the major vegan impediment.
If I'd bothered to read further I would have realised that this Sunday, when Melbourne was pelted with a volume of rain it rarely sees, provided very nearly the worst conditions for honeycombin'. It seems that these ideally-rigid sugar sponges will happily soak up any available moisture in the air, rapidly reducing themselves to a sticky mess unless they're prepared and stored in the driest of conditions. Whoops. At least they still taste good. Especially when coated in comparatively bitter dark chocolate.


'Honey'comb
(based on a recipe contributed to All Recipes by Nicola)

Paper-line and grease a small baking tray. Set aside a small cup of tap water.
Heat the golden syrup, agave nectar (if using) and sugar in a medium-large saucepan. Bring them to the boil, then simmer for 5-10 minutes. You need to get the sugar to a toffee-making stage - test it by spilling a drop of the syrup into the water cup; it's ready when the sugar cools into a brittle toffee drop.
Take the sugar syrup off the heat. Add the bicarb soda and stir it all together vigorously - it will froth up a lot! Spread the mixture into the cake tin as quickly as you can, as it will harden rapidly. Allow the honeycomb to set completely at room temperature and store it in a dry place.
Posted by Cindy at 9:59 pm