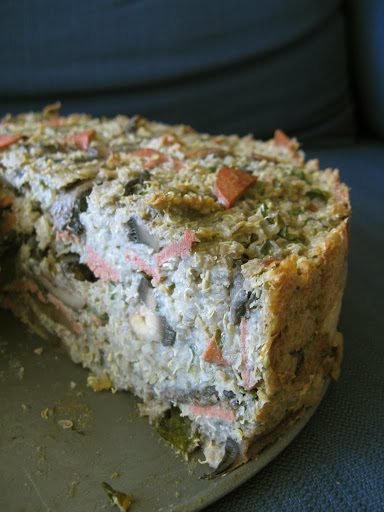 It seemed on Saturday that baking biscuits wasn't enough. Even though I knew I'd probably be eating dinner alone I was compelled to prepare a full meal, telling myself that the leftovers would serve me well for workday lunches. A more accurate explanation is that I was at a loose end without an internet connection. Without the ability to write or read food blogs I resorted to creating more food blogging fodder for later! Of course I couldn't refer to my enormous to-cook list of online recipes; actually, it was a good opportunity to try something from my smaller to-cook collection stored elsewhere.
With soy bacon in the fridge and a full packet of organic quinoa in the cupboard I quickly settled on Clotilde Dusoulier's recipe for mushroom, bacon and quinoa cake, taken from her first book Daily Adventures in a Parisian Kitchen. Like the cornmeal crunch I prepared a weekend earlier, this recipe isn't difficult but it takes a quite some time to bring together - the quinoa must be cooked and other bits chopped and sauteed before you even bother with preheating the oven for the 40-minute bake.
It all yields a hefty feed - Clotilde suggests that these 10-12 serves do well on a buffet table and I'm sure she's right. If only mine looked more appetising! Sadly the sauteed mushrooms tinged the entire cake a sickly grey. It tasted fine, though I would have enjoyed more of the crispy crust and less of the moist centre - if I made it again, I'd try spreading it into a larger rectangular baking dish to increase its surface area and crust. The cake's mild flavour is easily perked up with a side salad of rocket and capers.

Put the quinoa, water and stock cube in a medium saucepan and bring them to the boil. Reduce the heat to simmer them, covered, until the quinoa absorbs all the liquid - this will take about 15 minutes.

While the quinoa's cooking, heat up a large frypan or saucepan and add the oil. Cook the onion over medium heat until softened (about 8 minutes), stirring it often. Next add the mushrooms and cook for another 5-10 minutes, until most of their liquid has evaporated. Set aside the onion and mushrooms, and use the same pan to cook the soy bacon for a few minutes.
Allow all the above ingredients to cool a bit, then preheat the oven to 200 degrees C and grease a baking dish or springform cake pan.
In a large mixing bowl, whisk together the eggs, cream, salt and pepper. Stir through the quinoa and mushroom mixtures, then the soy bacon and the parsley. Pour the batter into the baking dish and smooth over the surface a little. Bake it for 30-40 minutes, until the edges are golden (or grey-golden!) and crusty, and a skewer inserted into the middle comes out clean. Allow 5 minutes or so for it to cool, then ease the cake edges away from the dish with a knife. Slice and serve warm or at room temperature.
Posted by Cindy at 9:10 pm