Update 27/1/2019: Vege2Go is now trading as a seller of pre-made meals and snacks rather than as a restaurant or cafe. 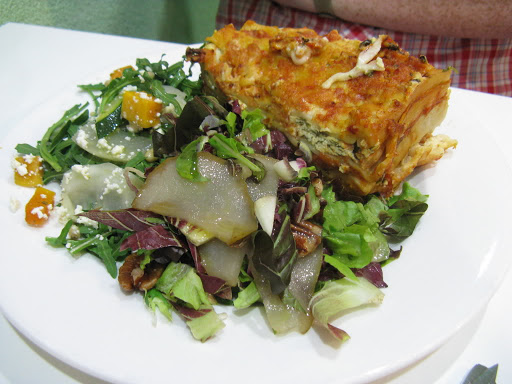 Vege2go gets its act together a whole lot quicker than this here blogger. I wrote about them back in February, citing their calzoni pastry and chocolate cake as their weaknesses. One short month later (especially short - it was February!), they announced new improved recipes for both in their e-newsletter! I'm not claiming that they were clamouring for my approval in particular, but their webmaster Stefano did us the courtesy of stopping by and leaving a comment. It all combines to paint a picture of vege2go cheerfully absorbing and acting on well-intentioned criticism, no?

So it's with some embarrassment that I admit that it took us nine months to get back there and try those new recipes. So long, in fact, that the calzoni aren't even on the menu any more! 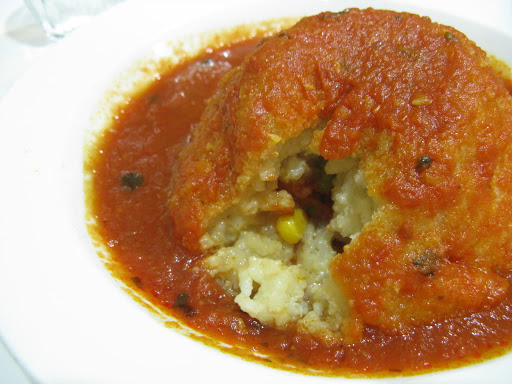 Nevertheless, there were more than enough other dishes to choose amongst. Though I was pretty tempted by the pastry triangles and the mushroom polenta bake, I ultimately went for the arancini with napoli sauce ($8.95). It proved to be a tasty and hearty meal - not excessively oily or cheesy.


Michael ordered the sides for both of us by going for a discounted meal - a main and two sides will set you back $14.95. The vegetable lasagne, radicchio pear salad and rocket explosion salad (pictured up top) all hit the spot. 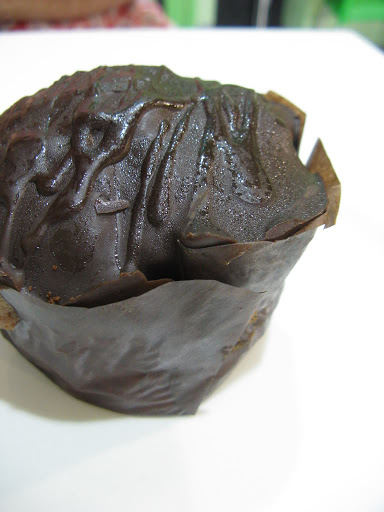 We could, nay, should have returned home without dessert, but I was keen to compare the current version of the chocolate raspberry cake ($6.50) with the previous one. It features a crunchy dark choc top and some light soft vegan cake. Though the texture's wonderful, I thought the cake was too light on the chocolate and raspberry. 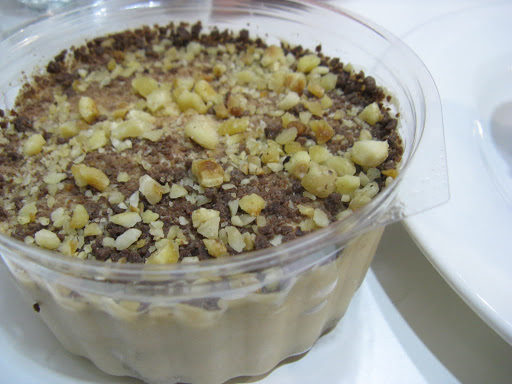 Once at the dessert counter, I was overwhelmed with the variety of treats available and recklessly bought a second item, this choc hazelnut tiramisu ($6.50). Of all the things I've eaten out of disposable plastic in my life, this is the best. (And given that I ate it at vege2go, there's half a chance that plastic's getting recycled!) Be warned, though - it's a generous serving and you're best advised to share it with a trusted friend. Just be sure you trust them, mind, otherwise you'll be fighting hard for that last mouthful!


Vege2go still do a fine line in convenience food and I admire their commitment to evolving and improving. While they won't be winning haute cuisine awards any time soon, I'd nominate them as the most unceasingly cheerful, friendly and helpful staff I've encountered in Melbourne. And that's something to come back for!
Posted by Cindy at 10:34 am