Our one full day in Cambridge started at the visitor information centre, trying to suss out how best to spend our limited time. Nothing much in the centre took our fancy, but while we were outside debating how to proceed, a kindly old gent wandered over and offered us a one-hour walking tour of the colleges. He moved at a pace that suited our levels of walking enthusiasm, so we agreed and headed off. He was an ex-student, who had studied medicine back in the 1950s and was deeply in thrall to the mystique of the ancient college town - he sounded slightly regretful that students were no longer fined for leaving their colleges without their full academic robes on.
We started out at Kings College, with the famous and ridiculously impressive chapel we'd admired from the outside yesterday. It was even better from the inside - a gorgeous feathered ceiling and some of the most impressive stained glass windows around. 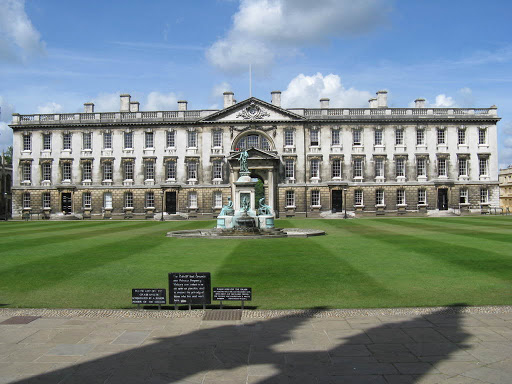 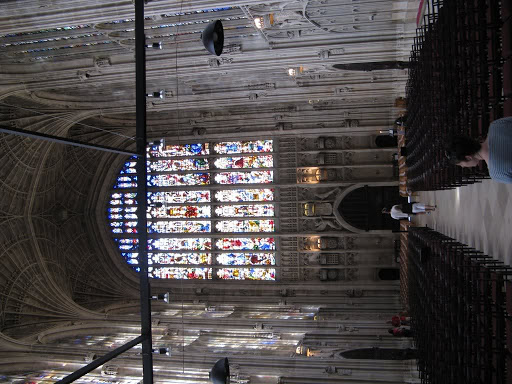 We snuck through the square and out to Cambridge's 'Bridge of Sighs' - the bridge itself wasn't super interesting (except for the slice taken out of one of the decorative spheres by the original builder as revenge for not being paid in full), but the view down the river was pretty spectacular. As were the private college gardens across on the other side. 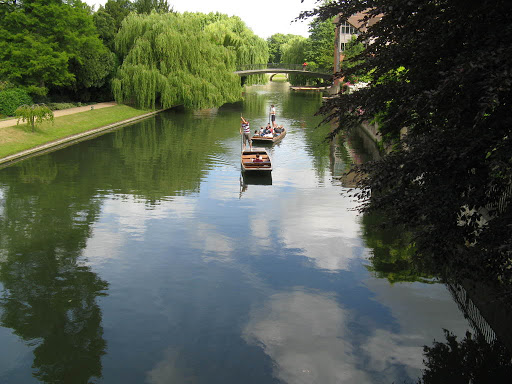 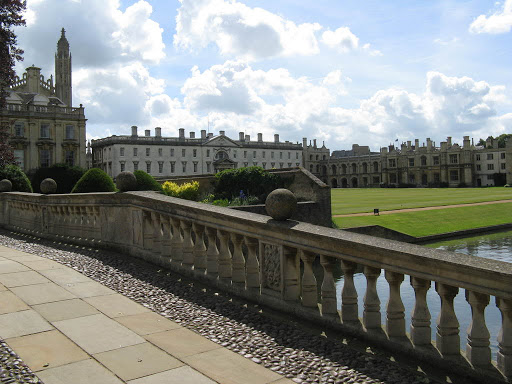 Next stop was Trinity - the strongest mathetmatical college, and most famous for having been Newton's college way back in the day. His room is the upper set of windows second from the left - it blows my mind that these ancient buildings are still functional - imagine being the poor maths undergrad who gets put in Newton's old room! Too much to live up to. 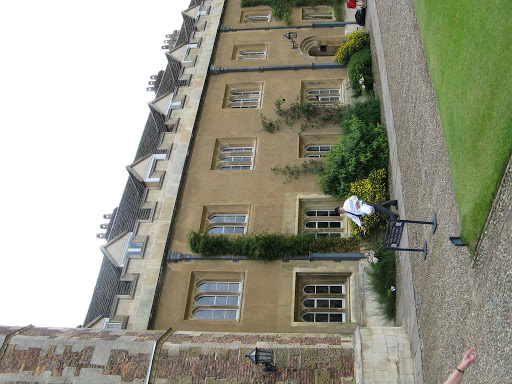 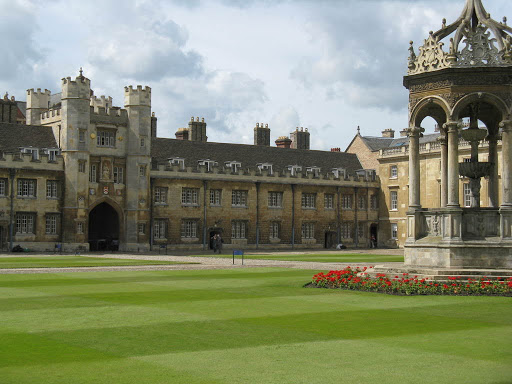 Our final stop was Trinity Hall - one of the smaller colleges and most famous (in our household at least) for being the place the 7 year old toff was intending to read law at in the 7-up series. 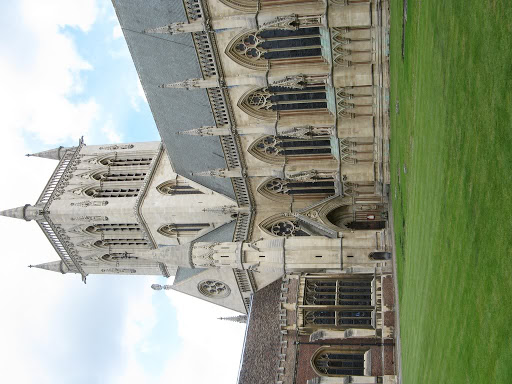 With that we'd reached the end of our tour - good value at 12 pounds, cheaper than the entry fees to each of the colleges would have been on their own. We scrabbled around town for a while trying to settle on a lunch option - unfortunately the most reputable dedicated vego restaurant in town closes on Sunday and Monday, the two days we were there. In the end, we stumbled onto Mouth Music - a little van on the street promising vego food to make our tastebuds sing. 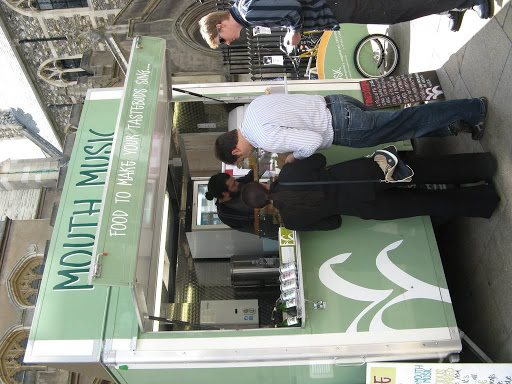 I went for the lunch wrap: felafel with tahini and harissa wrapped up with some greens and carrot. It was outstanding. 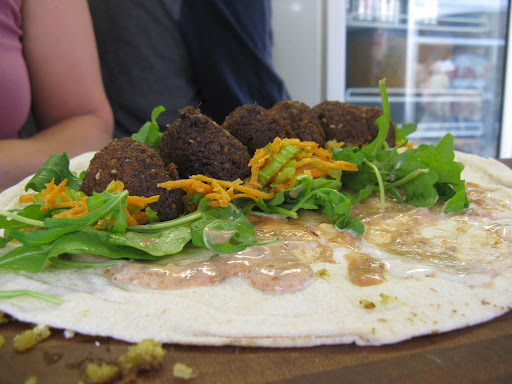 Cindy went for more mushroom welligton, and was again impressed. 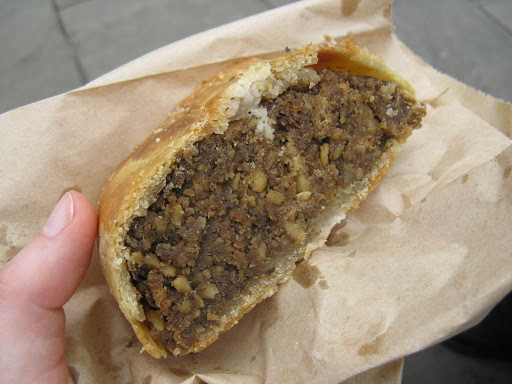 Powered up with food, I decided to take on the 123 steps of tower of Great St Mary's Church. The church is the university chapel, and has been around since the early 1500s. It really does provide some amazing views - particularly of the King's College Chapel. 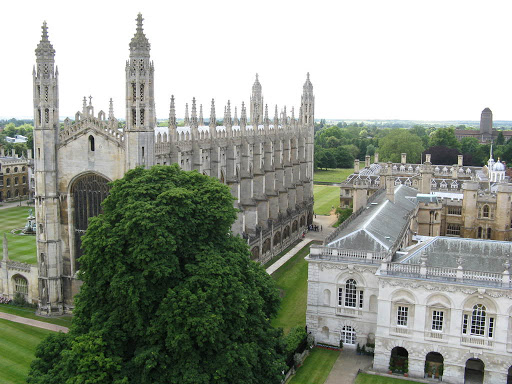 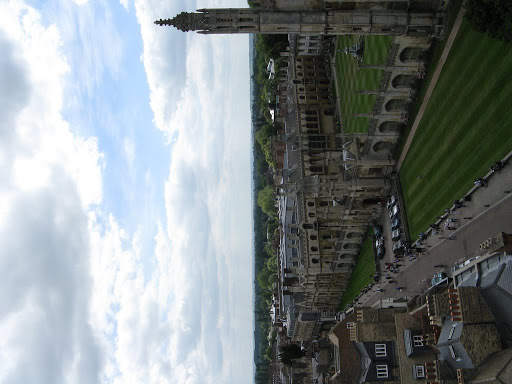 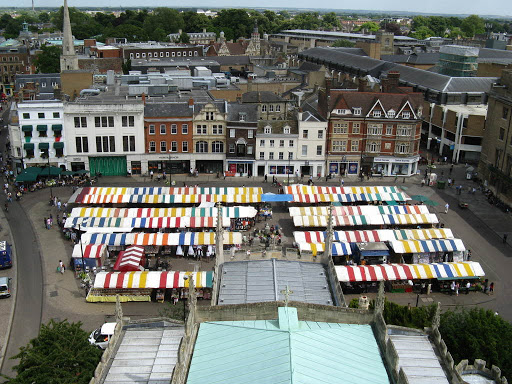 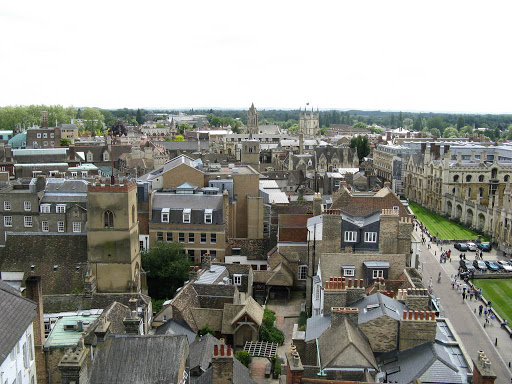 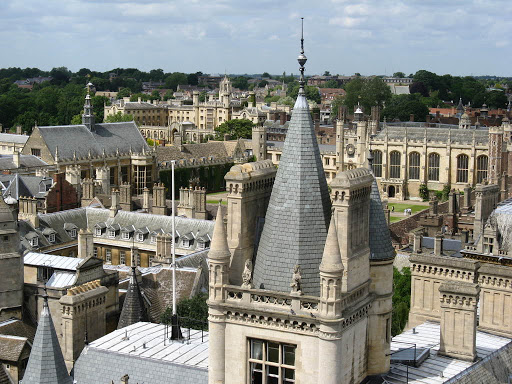 After all those stairs I was in need of a drink, so I dragged Cindy over the river to the gorgeous Granta hotel, sitting right on the bank of the Cam. 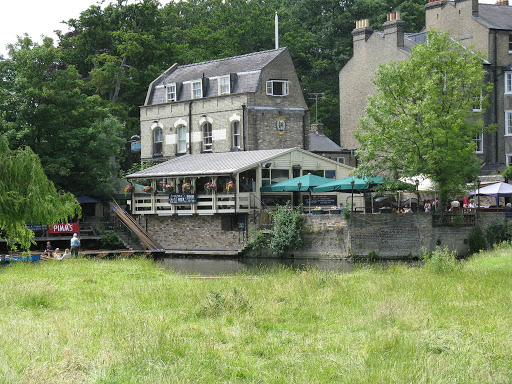 The main influence on Cindy of the trip so far has been an increased enthusiasm for Pimm's and onion rings, and the Granta happily indulged her with both, while offering us some lovely views across the water. 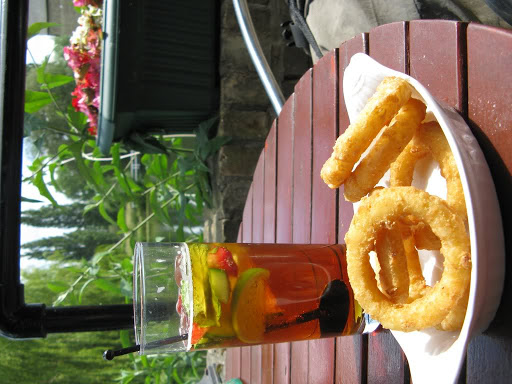 We followed up with a quick wander through some of the public land around the river (most of the beautiful gardens and bridges are owned by the colleges and are either off-limits entirely or only accessible for moolah). 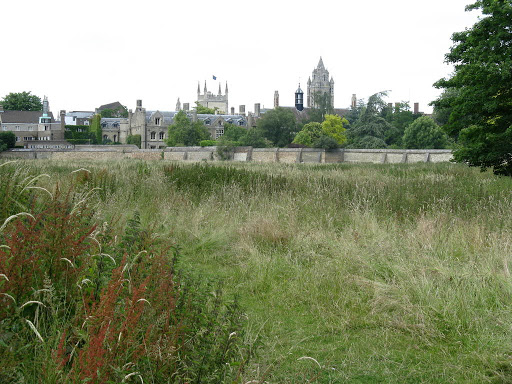 We ended the evening at another pub, the highly recommended Kingston hotel near the place we were staying. Unfortunately, despite the impressive looking menu, the pub was out of almost all their vegetarian meals, leaving us with just a tomato-y pasta and a cheesy salad to share. Disappointing.
Posted by Michael at 7:11 am