On Friday morning we had intended to get going early and breakfast at the Borough Market. However, events conspired against us. First, we discovered that on Fridays the markets don't open until noon. No problem; instead we shared a still-warm baguette breakfast (fresh from the bakery, smothered in butter and Vegemite) with Emily and Sam, also savouring a final chat before we moved on. Plan B was to stop by the Tate Modern before lunching at the market. Heavy traffic and subway construction ensured that instead we would spend almost 2 hours travelling little more than 3 kilometres. I surprised both of us by feeling neither anxiety nor annoyance - truly, I'd shaken off my recent work pressures and embraced the holiday! 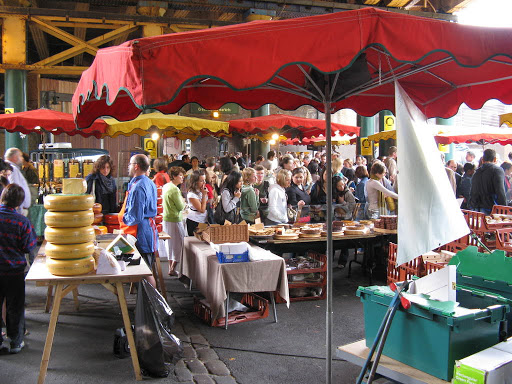 So it was straight to the markets for browsing and grazing. The Borough Markets are kind of posh, from the produce to the small goods, cakes, pies and olives - everything is organic or free-range or biodynamic and often comes with a slick logo. It's difficult to imagine that I'd embrace such a market for my regular shopping but it was ideal for our holidaying purposes. 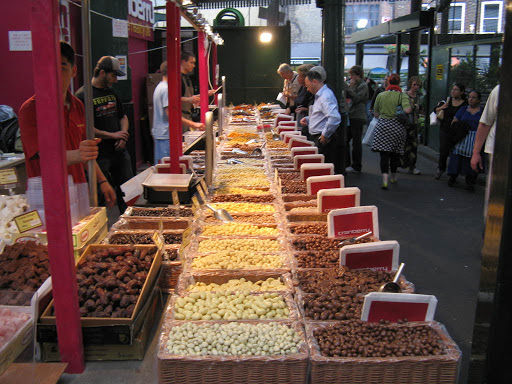 I stopped almost immediately for some dried fruit and nuts to pack away for later. 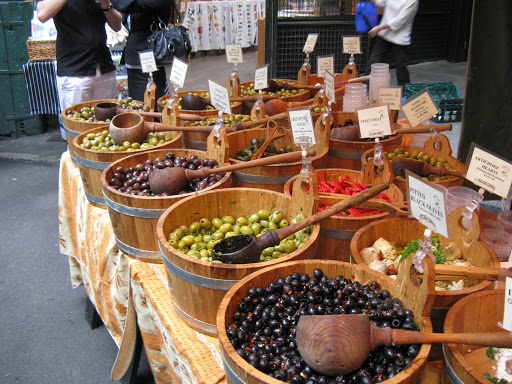 Michael was similarly drawn to the olives. 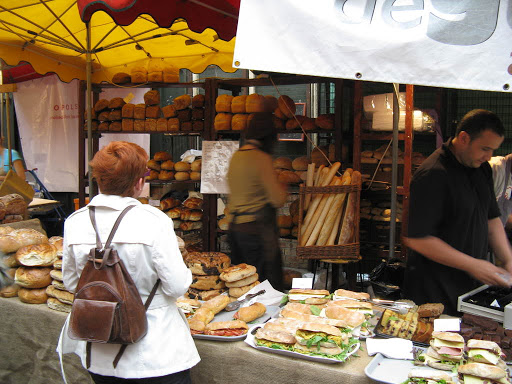 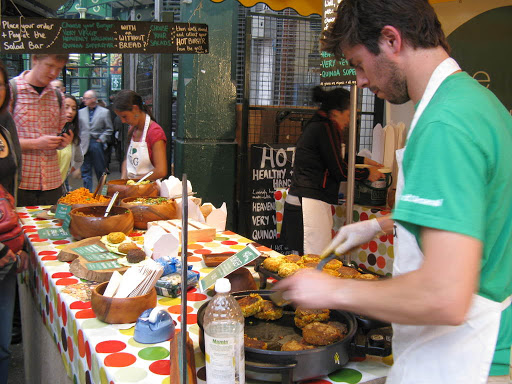 Out first on-the-spot eat was from this vege burger stand - we chose the heavenly haloumi patty, which was as full of juicy shredded veges as it was cheese. 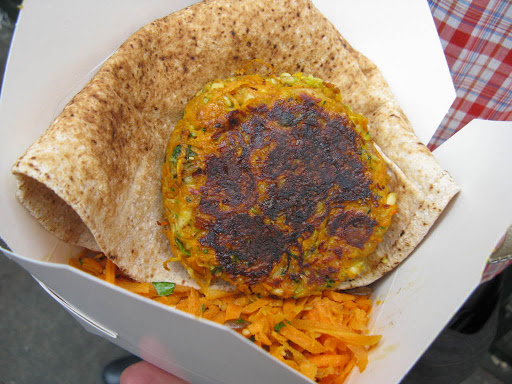 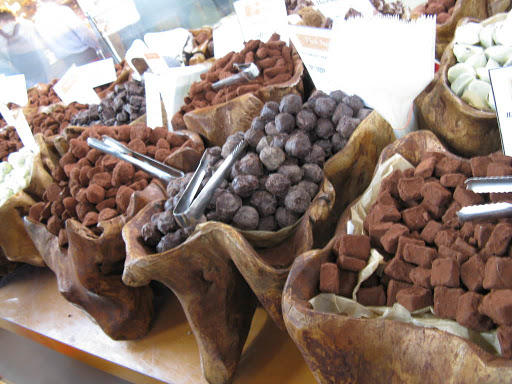 Michael was as shocked as you must be that I didn't buy chocolate. 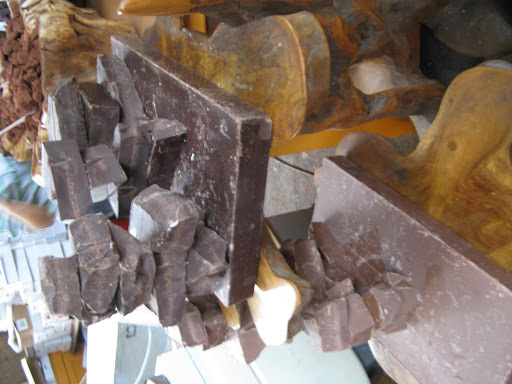 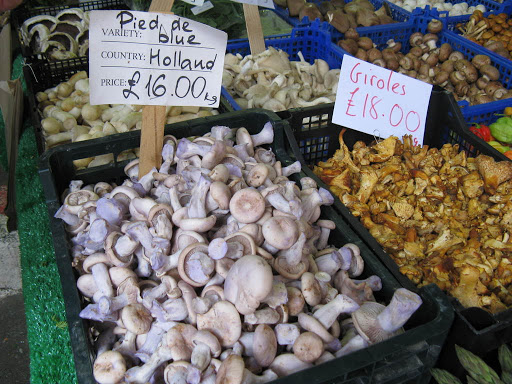 I wished that I could take some of the produce home to a kitchen to prepare for myself, especially the asparagus and wide array of wild mushrooms. 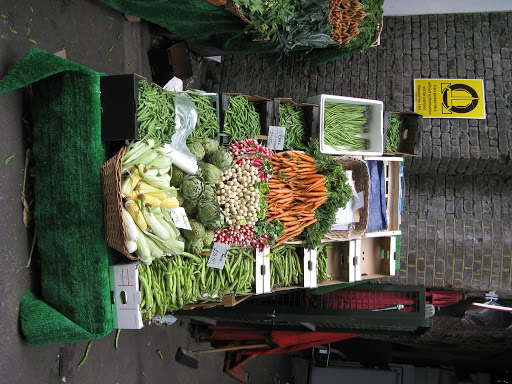 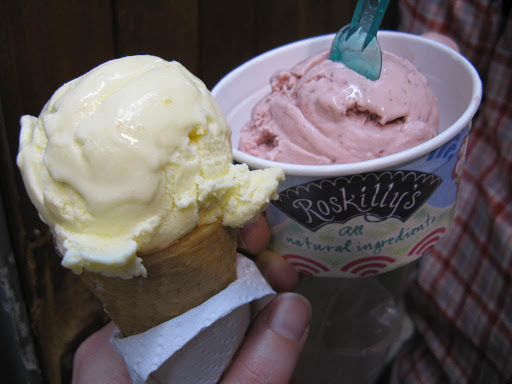 Some nearby organic ice cream served as a worthy distraction - orange and mascarpone for me, strawberry for Michael.
There was a little rain and so we made our way to the tube. Our next stop was Hampstead, a fancy part of town that's apparently rather good for celebrity spotting. However, we were actually there for a wander around Hampstead Heath. It's a large and lovely park, with a slight elevation that's sufficient to offer views across the very flat city. If anyone famous or successful was walking their dog, we didn't notice. 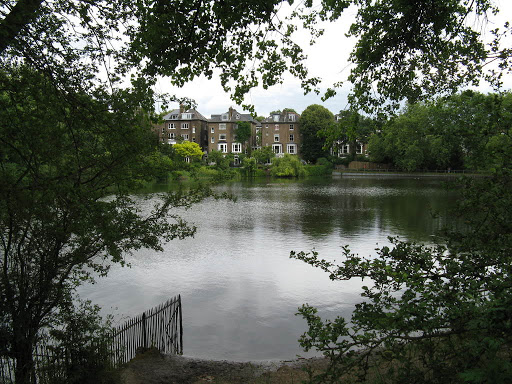 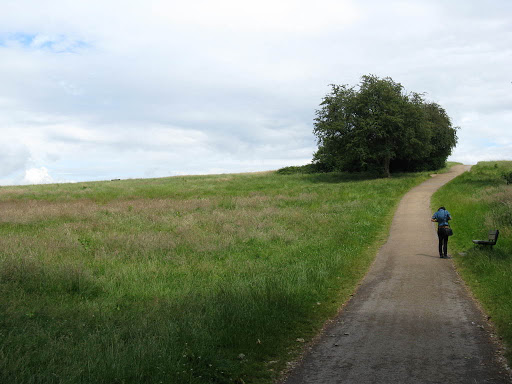 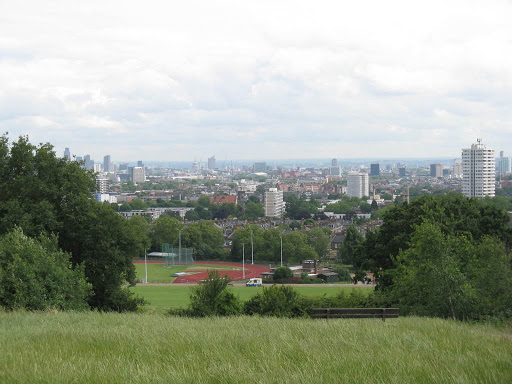 Naturally our market snacks had their moment in the sun, too. 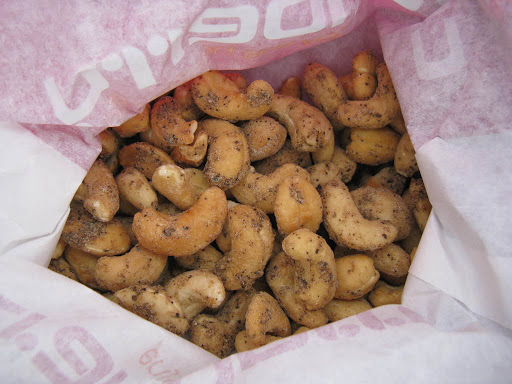 These salt and pepper cashews were nice, but not nearly as nice as the recipe that is now known as cashew crack 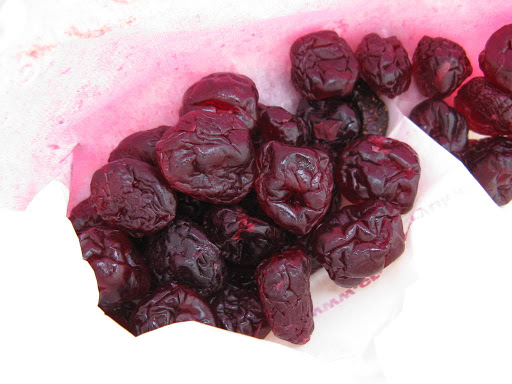 I had to have these razcherries from the moment I saw them - I remembered Buttons recommending them. I think I involuntarily swore the first moment I tasted one, they are so darn good. Like those raspberry jube lollies but actually fruit! How can such a wondrous thing exist? How are they bred? What does a fresh one look like? Where can I get some more right NOW?! 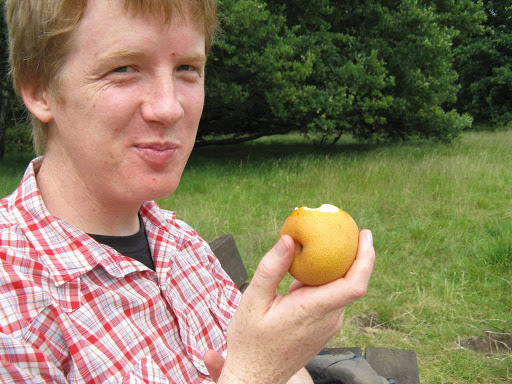 And there was fresh fruit too - nashi pears and nectarines. 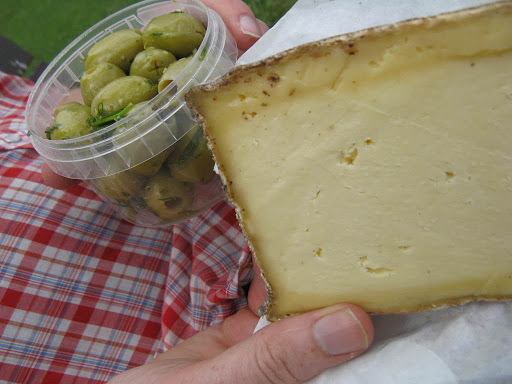 Later on our walk Michael broke out the olives, which were packed with parsley, tarragon, garlic and lemon juice. The cheese is unpasteurised and therefore illegal in Australia. I was indifferent to his savoury feast and ate more razcherries. 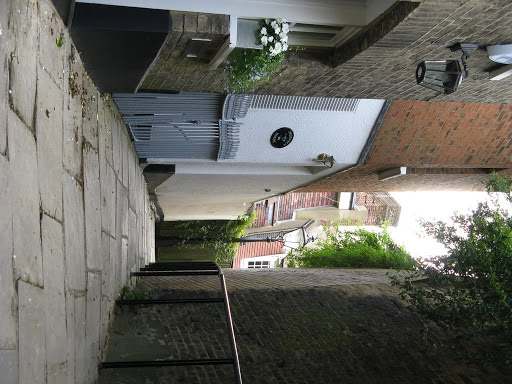 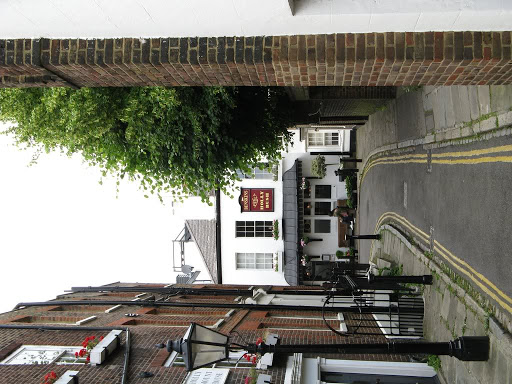 Back in Hampstead we stopped at the Holly Bush, a cute pub tucked away and recommended by Emily. 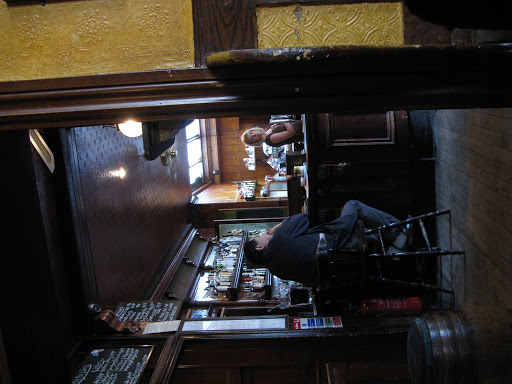 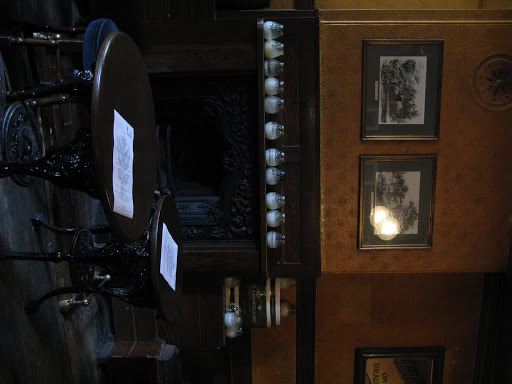 The next couple of hours passed without anything photo-worthy happening. We returned to the subway and travelled to Hammersmith, wandering along the Thames a while. We needed to build some anticipation and appetite for dinner. We were returning to what was the highlight of our last visit to London - the Gate Vegetarian Restaurant. Even better, we were meeting Krusty and Jason there! They were our regular dining companions in our first 6 months of living in Melbourne, introducing us to the likes of Polly, the Vegie Bar and Shakahari. Since then they've been living and working in Colchester, the next stop on our UK tour.
The Gate is pricey, though it may simply be the exchange rate that puts it beyond Shakahari for us. It offers a similar level of carefully composed meals with a seasonal rotation in a sophisticated but not over-the-top environment. 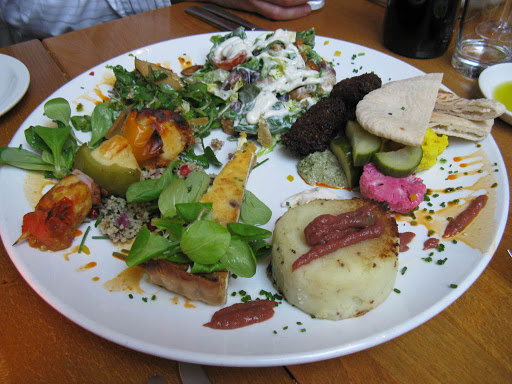 Usually only one or two items will jump out at me from a list of starters (i.e. whatever's deep fried) but here I was really stumped - how could I pick between, say, the courgette flower and the three onion tart? What about the haloumi kibi or the Indo-Iraqi potato cake? We were all able to sample most of the starter menu when we agreed to share a large mezze platter. Clockwise from the top, we had:
Wow. If you're after evidence of the strength of our friendship with Krusty and Jason, it's that we all faithfully restricted ourselves to a quarter of each item before rotating the plate and continuing. But it was hard. 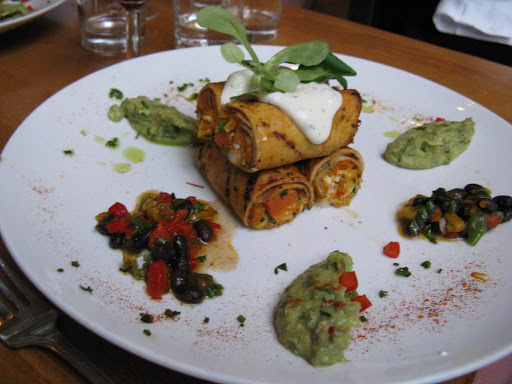 The other three were all taken by the tortillas for their main course. The wheat tortillas are filled with sweet potato, sweet corn, goat's cheese, coriander and chilli, then served with guacamole, sour cream and a black bean and red capsicum salsa. 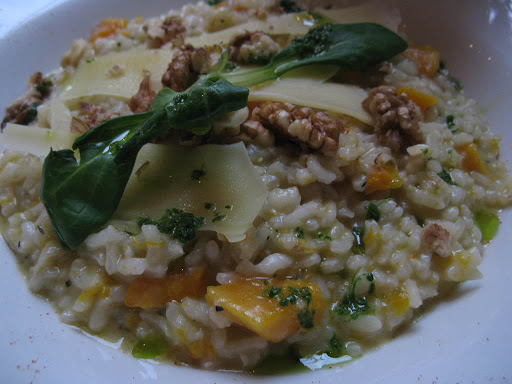 In a bid to be different, Michael changed his order to the risotto, with roasted butternut squash, dolcelatte and thyme, finished with walnuts and fresh parmesan. 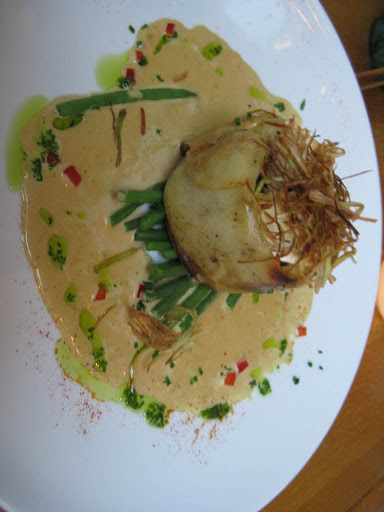 I reckon I got the best deal of the lot. This is the Rotolo - mushroom duxelles and goat's cheese rolled in a thyme-infused potato, served on a bed of French beans with a white wine, cream and cep reduction, topped with deep-fried leeks. Rich French food is not beyond the grasp of the vegetarian (nor the vegan, by the looks of this!). I will dream about that sauce for years to come, I'm sure of it. 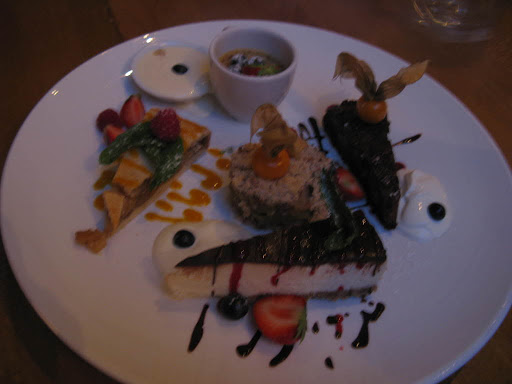 For dessert, we had the opportunity to share and sample again with the mezze of desserts. Sadly the light was waning and my photograph doesn't do this justice. Hopefully you can make out (clockwise from top):
I have never really 'got' creme brulee, but dang, now I do. With so much rich food in our stomachs, I don't know how we managed to reduce it to this: 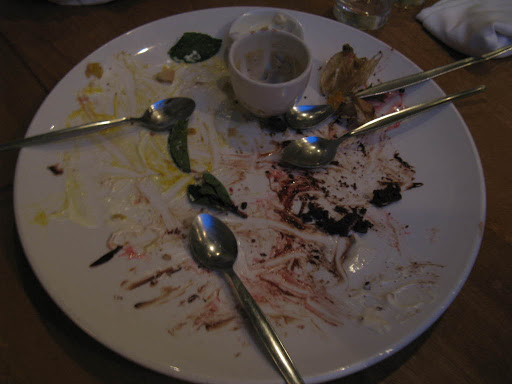