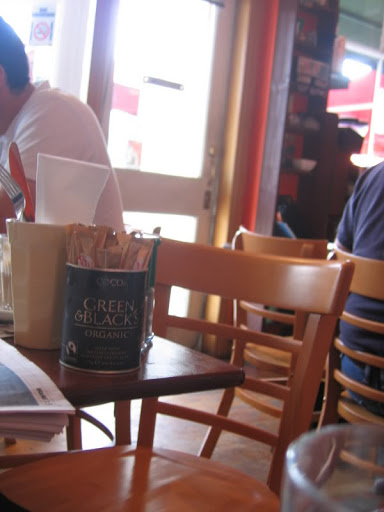 When Cindy and I first moved to Melbourne we were overwhelmed by the number and range of markets that this food-obsessed city could sustain. In the early months, we spent numerous Saturdays exploring - visiting CERES, Queen Vic, Collingwood, and Prahran. We've slacked off a bit lately - spending our weekends hanging around the northern suburbs rather than heading off into the rest of the city. This weekend we finally got back into the swing of things, with a trip to the South Melbourne markets via breakfast on Coventry Street. Knowing full well that by the time we made it across the river we'd be starving, we skimped on our research barely consulting The Breakfast Blog and not even picking up the Cheap Eats. All I knew was that Coventry Street was where it was at. We started a quick stroll along the cafe strip, but our increasing hunger and the fantastic looking menu at Q11 soon put a stop to our explorations. Q11 is bright and airy - not particularly trendy, but spacious and welcoming.

The menu is chock full of wonderful sounding breakfasts - mostly made using organic and free-range products (and they promise gluten-free versions of heaps of the menu items). There were more than half a dozen savoury vego choices and an impressive range of sweeter alternatives. Looking at the menu again, I can't believe how easily I made my choice - still, there's no going past a breakfast that has the words 'Mexican' and 'Extravaganza' in its title. Cindy prevaricated for a while, once again tossing up between sweet and savoury, but this time deciding to take a punt on the pudding rather than the panini. A creamed sago pudding with lime, coconut, berries and yoghurt to be precise. 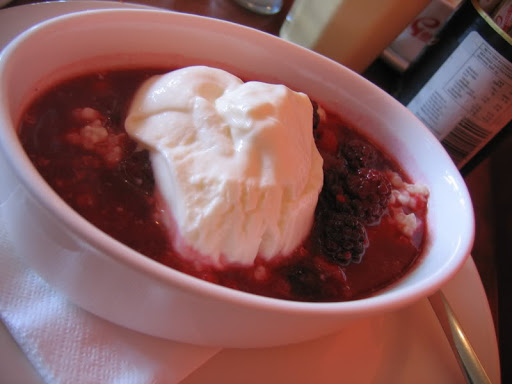 The berries were tangy and sweet and the jellyish sago was an intriguing pudding experience - the only downside was the lack of discernible lime or coconut flavours. Still, it was a hearty pudding and kept Cindy chomping away for some time. The menu entry for my Q11 Mexican Extravaganza promised refried beans, fried eggs on a pumpkin roesti with tomato and corn salsa and chipotle mayo. It sounded 1) amazing and 2) massive. Thankfully, they served up a sensible sized portion - the roesti was fairly small and the refried beans came stuffed into a mini tortilla. I disposed of it in double-quick time - the salsa and smokey chipotle mayo were superb, the eggs (it was the first time I'd had fried rather than poached eggs in ages) had startlingly bright and flavoursome yolks and the refried bean mix was a good combo of beans, tomato and spices. Throw in a couple of cups of well made coffee and it was one heck of a brekkie. 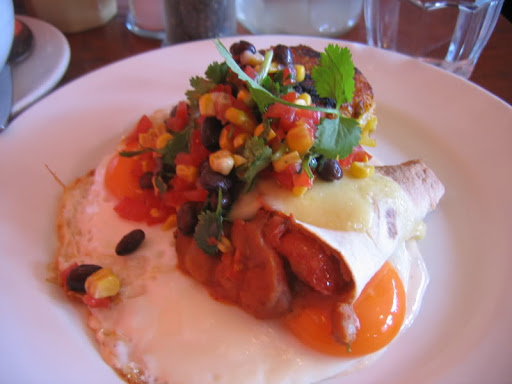 The service was friendly, if a little slow (the kitchen was working pretty hard to keep up with the Saturday morning demand) and the price came in under $30, putting it into the upper tier of our Melbourne breakfast experiences.