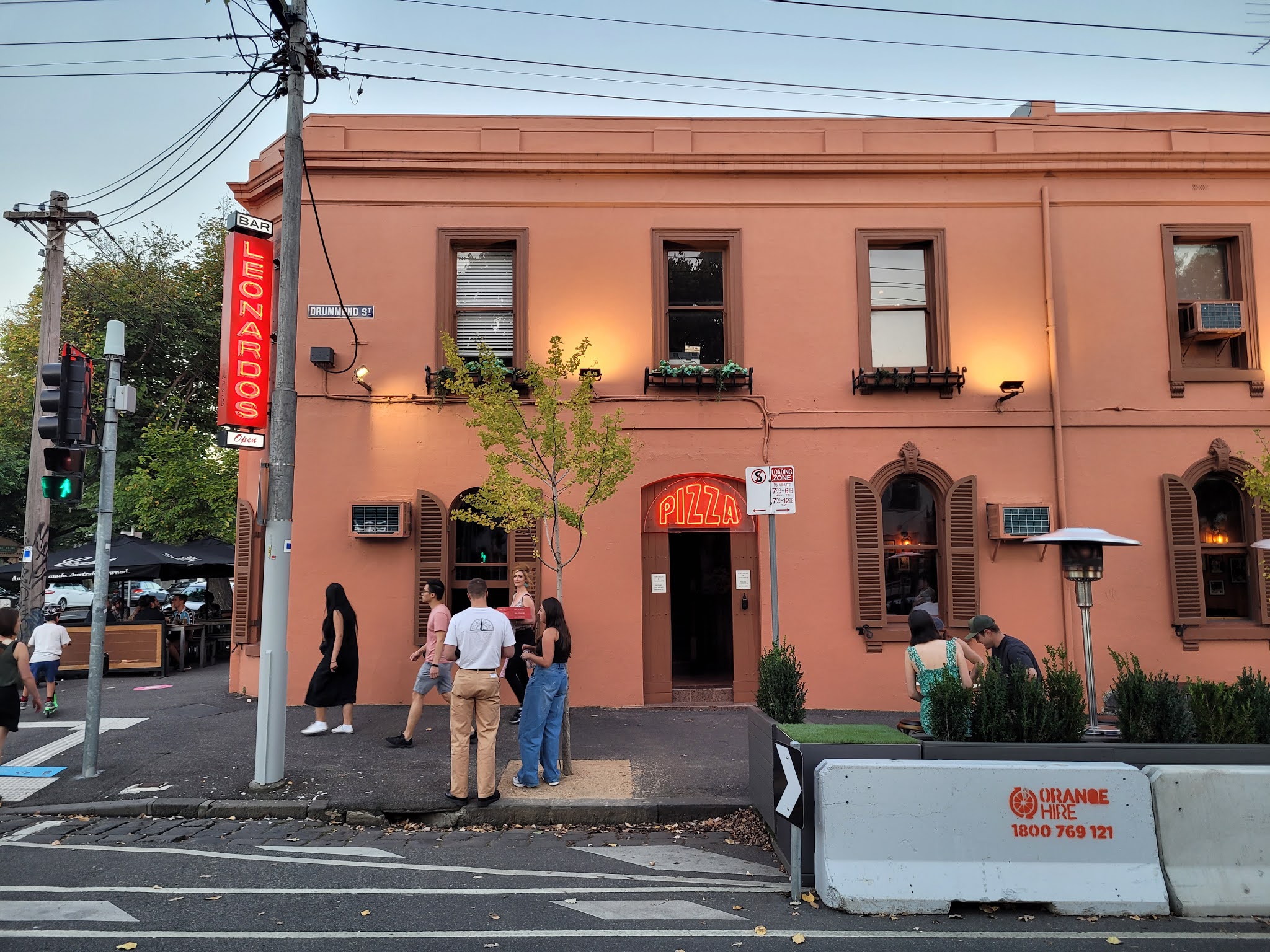 I walked and cycled past Leonardo's pink façade many times without paying it any attention, until my mate Adam mentioned that it's one of his very favourite spots at the moment. The premises have held pizza businesses since 1959, although Leonardo's has only been there a couple of years. They've leaned into its old-fashioned Australian/American pizza restaurant style with brick archways, wood panelling, and booth seating. 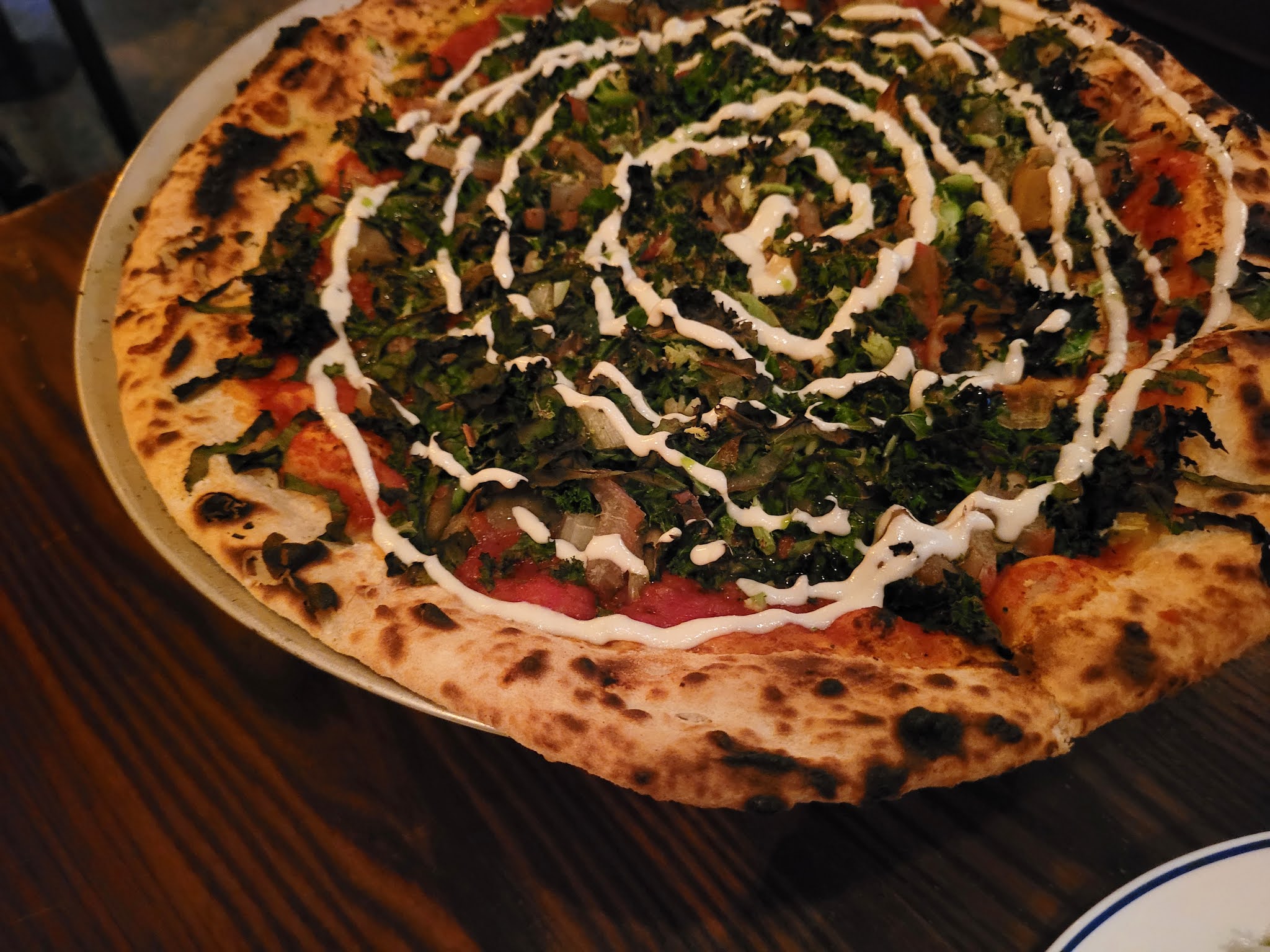 The menu fits neatly on one printed page: mozzarella sticks and hot chips to start, two pastas, two salads, 11 pizzas (one size fits all), and tiramisu for dessert. Vegetarian options are adequate and marked, gluten-free options aren't clear (although it sounds like they do offer a gf base). Leonardo's is most widely fêted for its Ramblr Chinese Bolognese pizza, but Adam wisely put me onto their one vegan option, the Veggie ($23), tucked right at the bottom corner of the menu.
It's been a slightly different experience on the two occasions we've ordered it. The first time its most prominent feature was a crisped-up smattering of kale on top; the second time it was softer, with the fresh and light tomato base taking the fore. In between, there's also chard, broccoli and eggplant, and then a swirl of macadamia crema on top. It's much more green than I usually go for with my pizza toppings, but it's good.
Leonardo's pizzas come with a non-vegan offering that I also rather like: a teeny tub of ranch dressing to dip your crusts into. It's runny and tangy, and works well with the thick, chewy pizza crusts. 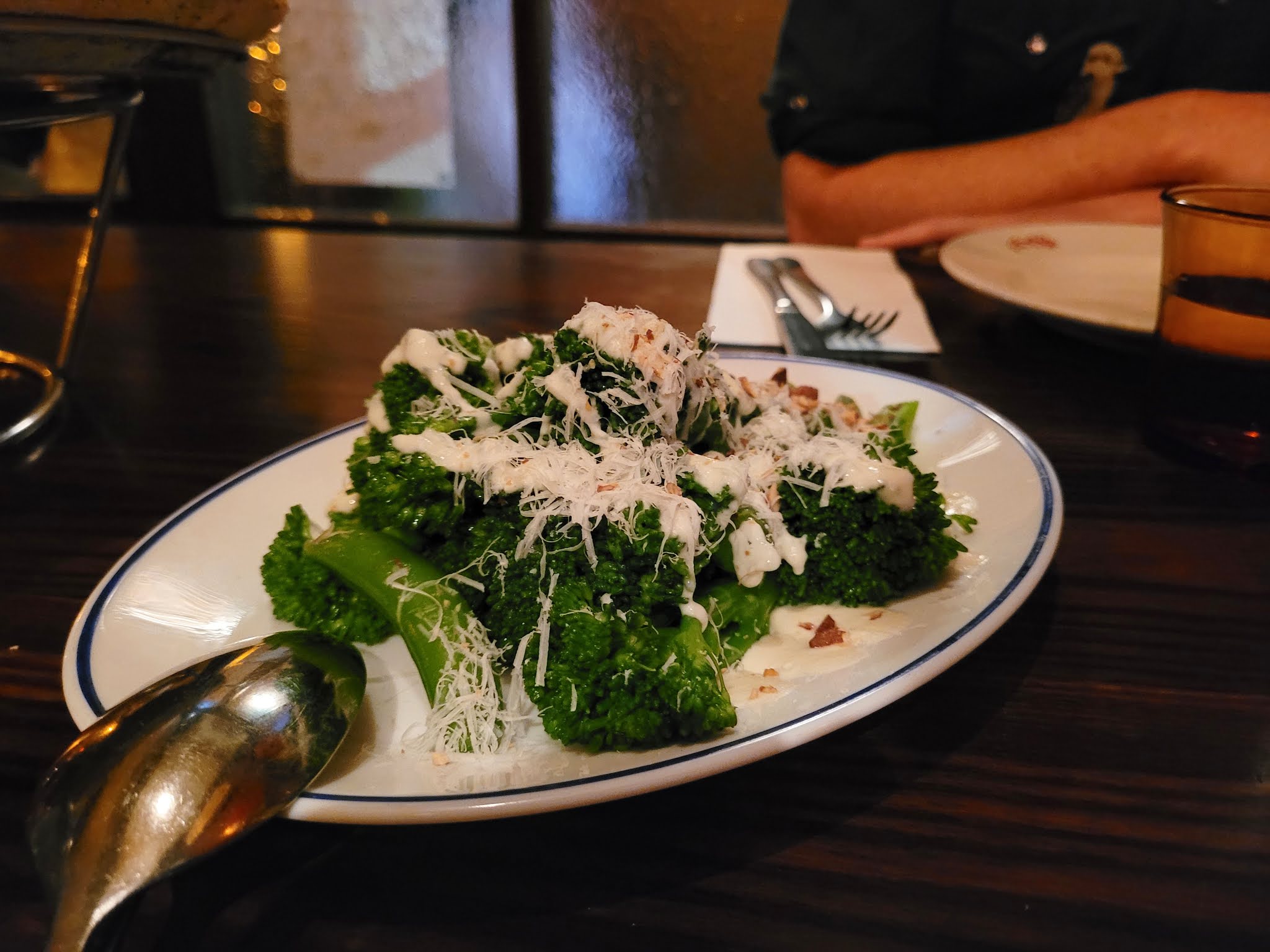 We added more greens to our meal with a side of broccolini ($16), thoroughly kitted out with sugarsnap peas, toasted almond and lemon dressing, macadamia crema and pecorino.
There are a few other vegetarian pizzas and one pasta to try - we endorse the taleggio-spiked mushroom toppings, and Michael would likely order the jalapeno toppings and I'd order the pasta before we got around to the margherita. I can't imagine ever sparing enough stomach space for the tiramisu, much as I wish to try it.
Leonardo's is not a destination dinner for us, but it's located within a comfortable walk of Nova cinema, Trades Hall, and the Curtin. We're already appreciating it as an easy, family-friendly eating spot when we've got tickets to something in the neighbourhood.
____________
Leonardo's Pizza Palace has won fans on Whatever Floats Your Bloat and Olive Sundays.
____________
Leonardo's Pizza Palace
29 Grattan St, Carlton
9242 0666
food, drinks
https://leonardospizzapalace.com.au/
Accessibility: There's a flat somewhat narrow entry, and a narrow walkway throughout the restaurant. Furniture is densely packed, a mixture of booths, low tables with backed chairs, high tables with stools, and outdoor benches. We ordered at the table and paid at a high bar. Toilets were gendered and extremely narrow (I could barely open and close my cubicle door around my legs).
Posted by Cindy at 5:34 pm