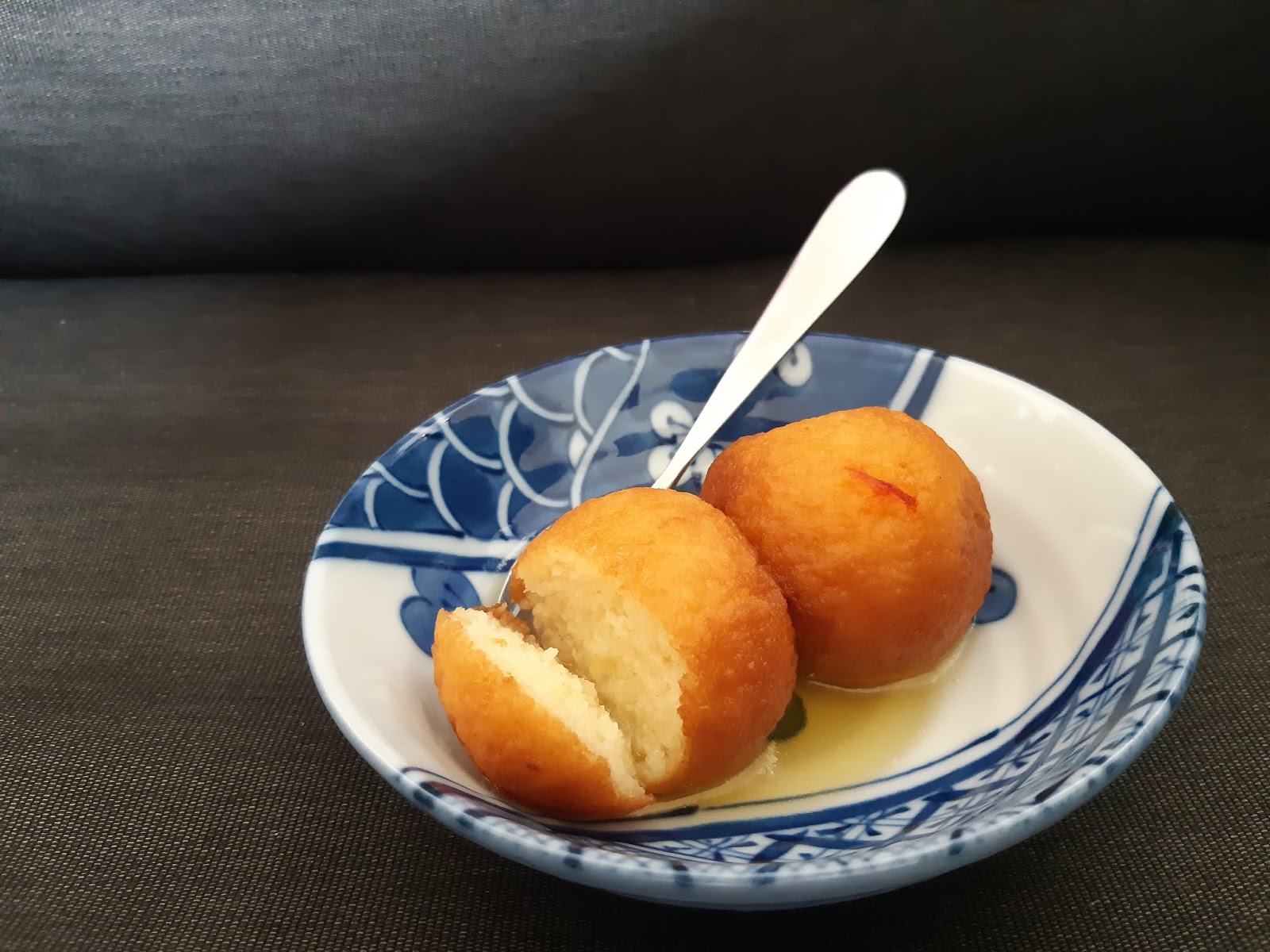 While browsing the pantry last week, I was reminded that we had most of a can of milk powder. (I bought it back in April to make rosmalai.) Milk powder isn't something we regularly use at all... as I searched the blog and my memory for other dishes that make use of it I came across a batch of biscuits, White Christmas slice, and a 15-year-old recollection of that one time I tried making gulab jamun.


My understanding is that gulab jamun is most traditionally prepared using a dense dairy product called khoya or mawa. There are also lots of recipes based on milk powder instead, and plenty of people who recommend packet mixes like Gits. It's the milk powder version that appears in the High Days and Holidays chapter of Mridula Baljekar's The Low-Fat Indian Vegetarian Cookbook, and that's the recipe I made back in 2005. I remembered it being stressful - probably because I was catering for at least 10 people, and because it was messy and uncomfortable to deep-fry so many dumplings in my Queensland kitchen. This week I felt ready to take it on again.

The recipe below uses the overall quantities from the original recipe, but I adapted it this week to accommodate the larger amount of milk powder I had to use up. Somewhere along the way my dough ended up with a cake batter texture rather than a rollable dough, so I've included notes to add the milk a bit at a time and not use it all if it's not needed. Thankfully I got my batch to a rollable state by leaving it on the bench to dry out a bit, and then dusting my hands in flour to prevent the dough from sticking. 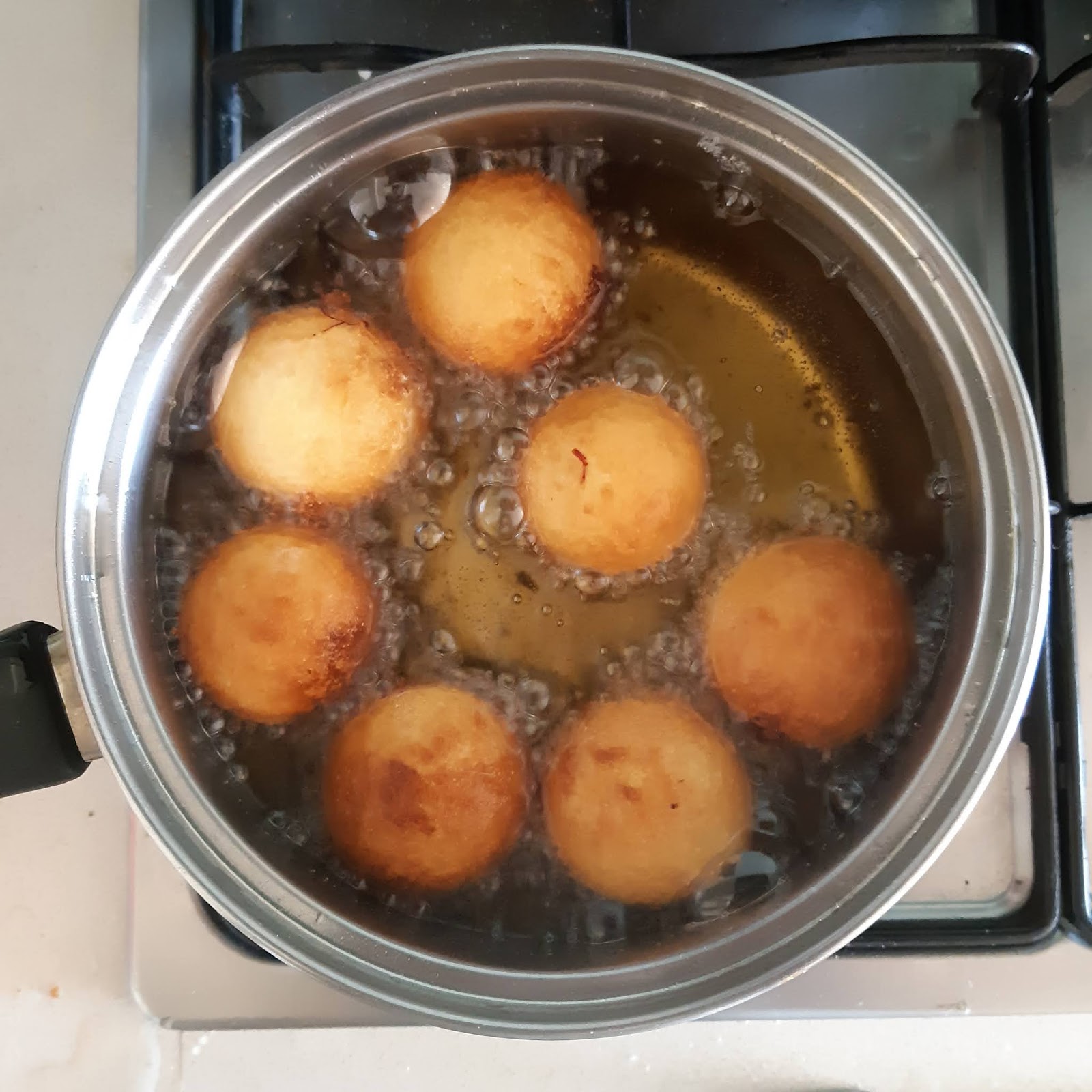 I expected the deep-frying to be a hassle, but it went just fine. The dough balls needed a little prod to stop them sticking to the bottom of the pan, but after that they expanded and rose to the surface, and happily bobbed about while I gently turned them to even out their browning. The sugar syrup soaking brings a second phase of expansion, and my gulab juman ended up bigger than golf balls! I'll have to start smaller if I ever do this again.

My other stand-out memory from making this recipe 15 years ago is that I overdid the rosewater, so I toned it down here. Maybe my tastes have changed, but I think I could've used more! Mridula Baljekar serves her gulab jamun with rosewater whipped cream, but I think they're already plenty rich and fancy on their own.

Heat 2 tablespoons of the milk and soak the saffron threads in it. Set aside to infuse.

Place the sugar and water in a large saucepan and set them over medium-high heat. Bring everything to the boil, stirring to dissolve the sugar, and simmer for 6-8 minutes. Turn off the heat and stir in the rosewater. Allow it to cool down a bit and transfer the syrup to a very large serving or storage container.

In a large mixing bowl, stir together the milk powder, semolina, flour, cardamom and baking powder. Melt the ghee and stir it into these dry ingredients. Add the saffron and the milk it was infusing. Pour small quantities of the remaining milk into the mixture to form a soft dough (don't use all the milk if you don't need to!). Knead the dough until smooth.

Heat the oil in a saucepan over medium heat. Break off scant tablespoons of the dough and roll them in your hands to form a smooth ball, then drop the balls into the oil. Lightly flouring your hands may help if the dough is sticky. Also, be careful not to overcrowd the dumplings in the oil because they will expand! Use a fork or similar to gently scrape the dumplings off the pan if they stick to the bottom - if they're not stuck, they'll soon float to the surface. I also used the fork to turn the dumplings and try to even out their frying. When the balls are dark brown on the outside, use a slotted spoon to retrieve them and drain off as much oil as you can before dropping them into the sugar syrup. Repeat the dough-rolling and dumpling-frying until all the dough is finished.

Allow the dumplings to soak in the syrup for at least 2 hours before serving.
Posted by Cindy at 6:32 pm