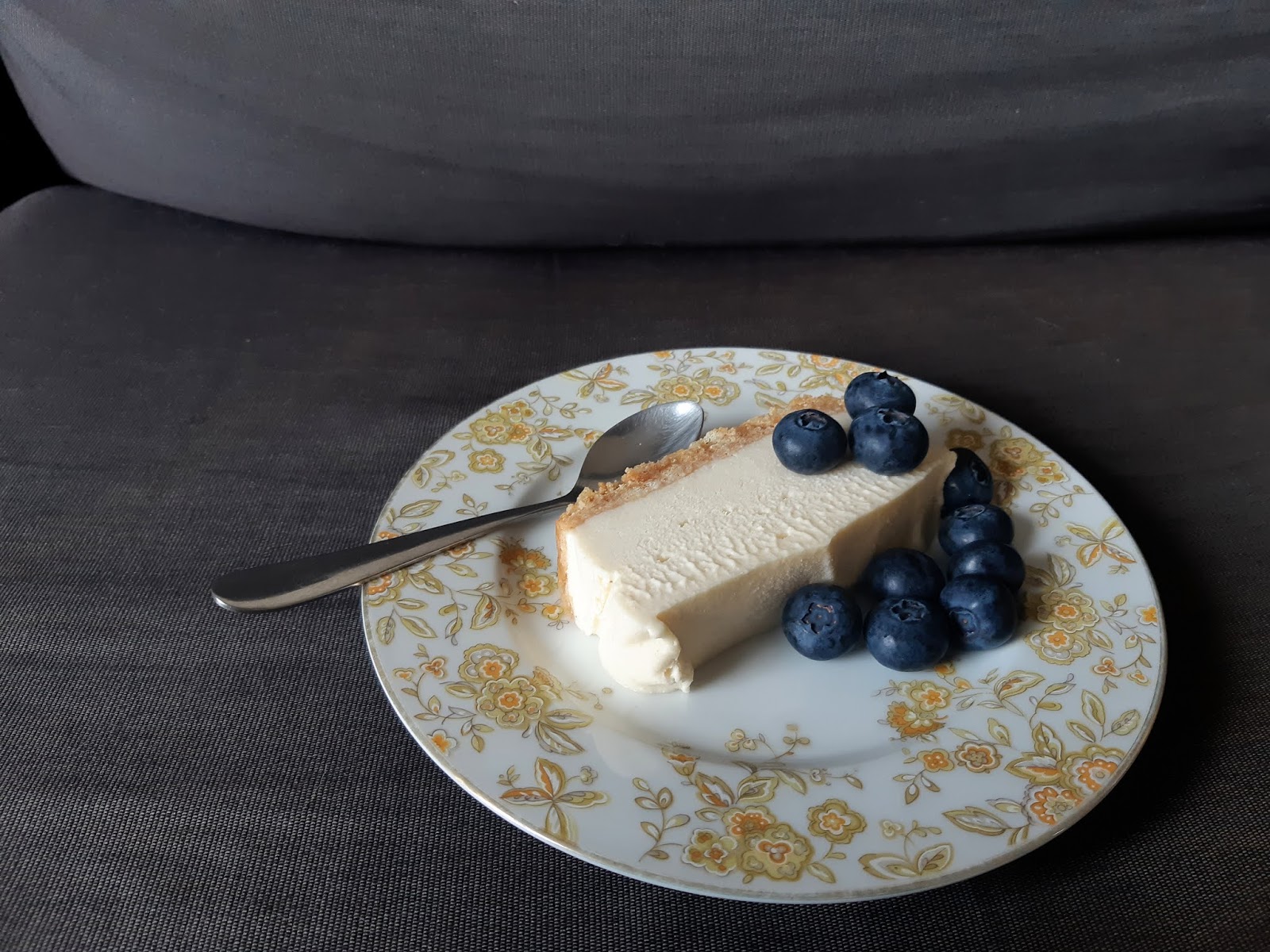 Speaking of mock dairy, I've been saving up a can of sweetened condensed coconut milk. The last time I used condensed milk was for a cheesecake, and I thought it would be fun to try veganising that recipe. This provided me with an excuse to buy that new-ish vegan cream cheese I like again too.


The last small vegan conversion challenge was choosing a biscuit to crush for the base. I chose Arnott's Nice as a decent analogue of the Milk Coffee biscuits in the original recipe, but I also noticed that Arnott's Gingernuts and Choc Ripple biscuits are vegan. They definitely invite some flavour adaptations to this base recipe, like cookies and cream, or ginger, coconut and lime.


Since we're still not in much of a situation to share food, I halved the recipe again, this time forming it a loaf tin. I bought fresh blueberries to try the topping option I didn't have the first time around. Everything came together well and I refrigerated the cheesecake overnight to set. It didn't set. I switched the cheesecake to the freezer for another day, where it set better than I dared expect! It was colder than planned, of course, but also very creamy, not at all icy, and tangy with lemon juice.


I don't particularly have any bright ideas for setting this cheesecake at room temperature, and I'm in not rush for a solution. The frozen cheesecake is remarkable, and is only going to be more appealing as spring comes our way.

Fold the biscuits between two sheets of baking paper and smash them to crumbs with a rolling pin. Pour the crumbs into a bowl and stir through the cinnamon. Melt the margarine in a small saucepan and pour it over the biscuit crumbs, stirring to thoroughly combine.

If you're able to, reuse the baking paper to line a 22cm springform cake pan, adding extra as needed. Spray the pan with oil. Press the biscuit crumbs into the cake pan, forming a wall up the sides of the pan as well as covering the base completely. Refrigerate the base.

Use a food processor or electric beater to combine the cream cheese, condensed milk and lemon juice, until they are completely mixed and smooth. Pour the filling over the base and refrigerate for at least 3 hours, ideally overnight.

For topping option 1, place the blueberries on the top of the cheesecake when it's ready to serve.

For topping option 2, remove as much pith and pulp as you can from the lemon rind. Place the rind, water and sugar in a small saucepan and bring them to the boil, allowing the syrup to thicken. Arrange the rind and syrup over the cheesecake when it's ready to serve.