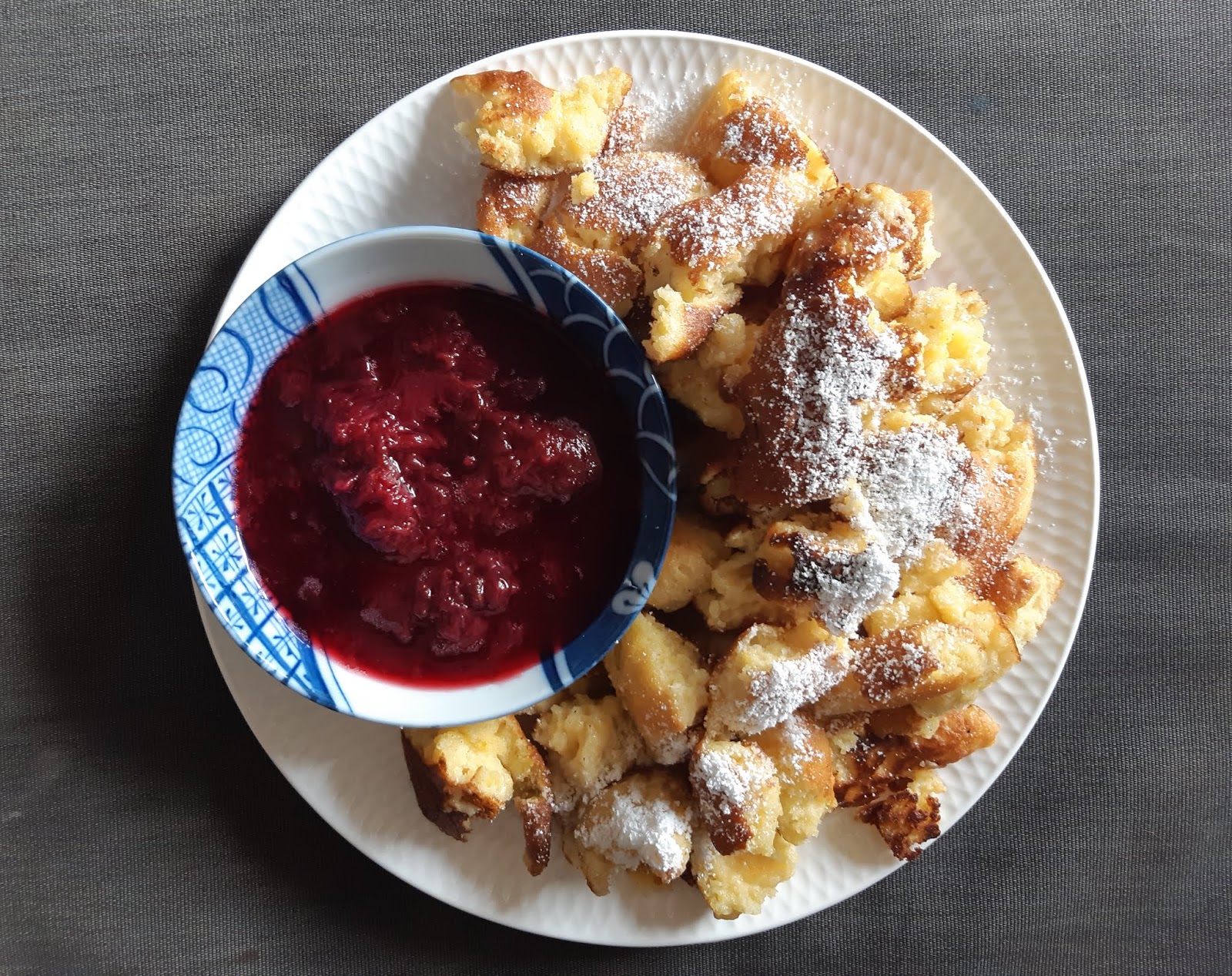 In the Lab Farewell Cookbook, Edith introduced me to a traditional Austrian treat that's found in restaurants, and that she and her mum also make at home. Kaiserschmarren is simple and appealing, a pancake that's shredded into bite-sized pieces, showered in icing sugar, and served with plum compote. Apparently you can eat it any time of the day, as a main or a dessert, and I gave it a shot for a weekend brunch with our online quiz club.

Making the pancake was a boost to my kitchen confidence! I'm often put off by the process of separating eggs, whipping whites, and gently folding everything together. But I pulled it off for a recent cake, and I was ready to go again here. Making and flipping a huge pancake is another task that gets me nervous, but this one puffed up beautifully and held together as long as I needed it to. This probably doesn't even matter, since it's all shredded up before serving, but I was mighty pleased to watch it cook so neatly. As an added bonus, the shredding stage gives you a chance to cook through any runny bits of batter that might still be hiding right in the centre of the pancake. It's almost a failproof technique!

Edith mentioned but didn't include a plum compote recipe, so I did a little searching and found this one on Cinnamon & Coriander. It's got a mulled wine style to it, and adds depth and contrast to the cloud-like pancake pieces. The leftover plums made their way onto my yoghurt-and-granola breakfasts.

Kaiserschmarren
(a recipe shared by Edith in the Lab Farewell Cookbook,
and credited to Kronen Zeitung Koch Buch)

In a medium-large bowl, stir together the flour, sugar and salt. Add the egg yolks, and whisk in enough milk to form a thick dough.

Heat substantial layer of oil (Edith says a finger thick; I did maybe 5mm) in a cast-iron frypan. Pour in the batter; allow it to cook until the pancake is bubbling on top and browning underneath. Flip the pancake to cook on the other side. Don't panic if it's a messy flip! When the pancake is cooked through, it's time to rip it into little pieces with two forks.

Transfer the pancake pieces to a plate and sift over some icing sugar just before serving.

Zwetschgenröster
(slightly adapted from a recipe on Cinnamon & Coriander)

Place the sugar in a medium-large saucepan over even, medium heat until the sugar is melted and turning golden brown. While the sugar is melting, wash the plums, slice them into halves and remove their stones. When the sugar is golden brown, carefully add the red wine and cinnamon stick. (For me, the red wine hissed a lot and the sugar seized up - don't worry too much about this.) After letting the mixture cook for about a minute, add the orange juice and plums. Cook the plums, stirring regularly, until they're tender and the sauce has thickened a little. I took about 20 minutes on a low bubble for mine, because I was happy for the plums to collapse. Turn off the heat and stir in the rum. Allow the compote to cool to room temperature and store it in the fridge.
Posted by Cindy at 6:09 pm