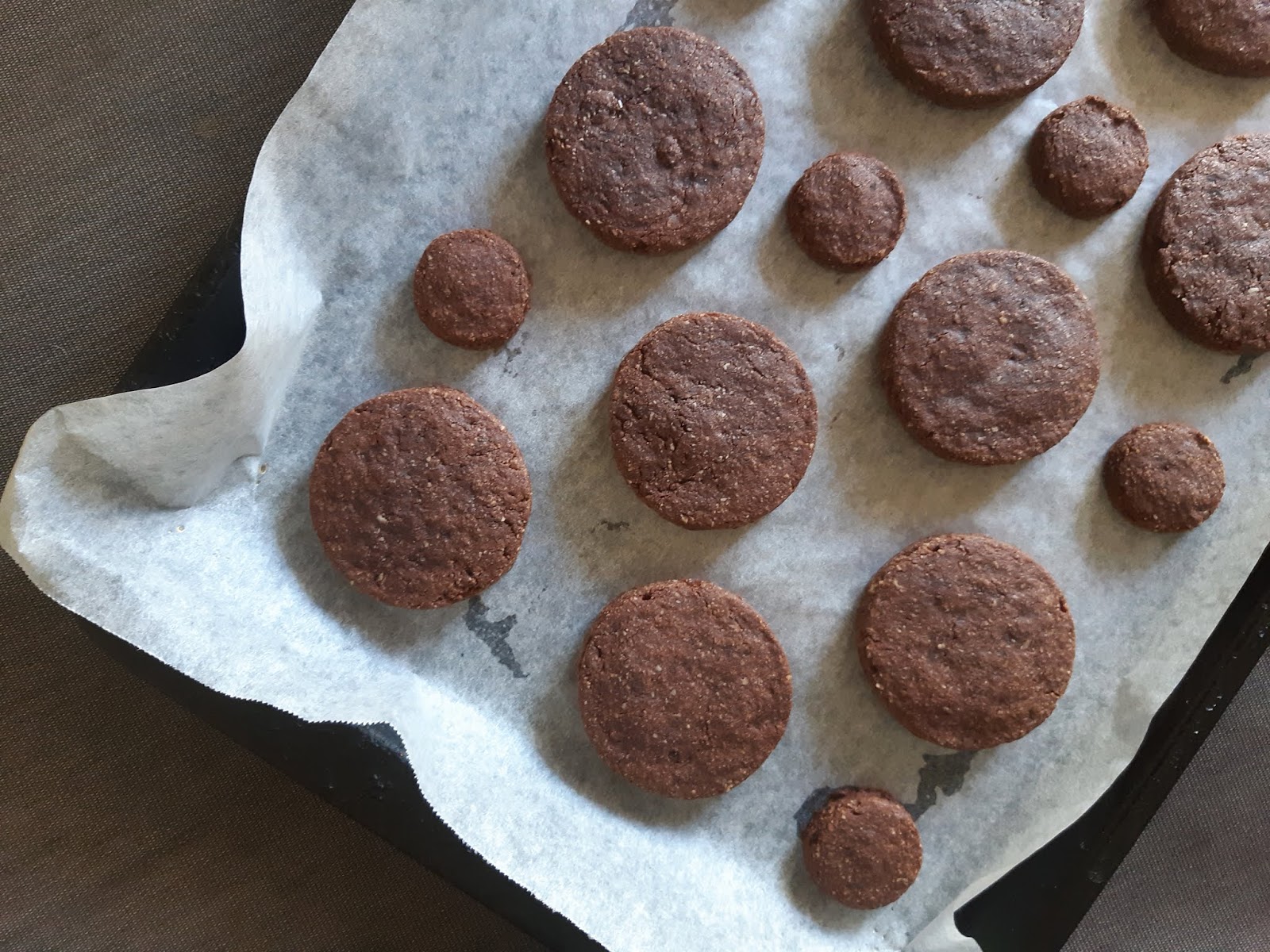 We went to a barbecue in the summer, and one of the other guests brought two plates of plain-looking vegan cookies that, once tasted, we all went wild for. It turned out that they were both Ottolenghi recipes that we could easily access ourselves, veganised with the use of powdered egg replacer. These Brunsli chocolate cookies, for example, appear in Ottolenghi's book Simple.

When I found the recipe I noticed that these chocolate cookies are not just vegan-friendly, they're also low-key gluten-free, made mostly of ground almonds and sugar. The original recipe calls for granulated sugar and icing sugar, but I used up some demerara sugar that had been in our pantry a while. I ground up my own almonds, and I think this led to me needing a bit more egg replacer to bind the dough than I would have if I'd bought almond meal.


Traditionally, I think these cookies are cut into star shapes, but I chose a variety of circle sizes. The little ones had a higher proportion of crunchy border, while the large ones had more room for the soft chewiness of a brownie. They were all a bit sandy-textured from the demerara sugar. Chinese 5-spice and orange zest are the secret ingredients, bringing complexity to the chocolate flavour without being individually detectable. I took some of the cookies over to a friend for her birthday, and she was just as taken with them as we were at that barbecue.

In a large bowl, stir together the ground almonds and caster sugar. Sift over the icing sugar and cocoa powder, then stir in the orange zest, Chinese 5-spice and salt until well combined. Using an electric mixer, beat in the egg replacer and vanilla. You're aiming for a firm, slightly sticky dough that will just barely hold together; I added a bit of extra egg replacer to get there. Drop the dough onto a sheet of plastic wrap, form a big flat ball of it, and pop it in the fridge for at least an hour.

Prepare a sparkling-clean bench or roll out some more baking paper. Unwrap the biscuit dough, drop it on your work surface, and roll it out to 1.5 cm thick. Use your choice of biscuit cutters to cut shapes from the dough and place them on the baking trays. Roll out the leftover over dough again to make more shapes. When all the dough is used up, you can sprinkle some extra sugar over the biscuits (I didn't bother).

Bake the biscuits for around 12 minutes, until their bottoms are crisp but their centres are still soft.
Posted by Cindy at 10:09 am