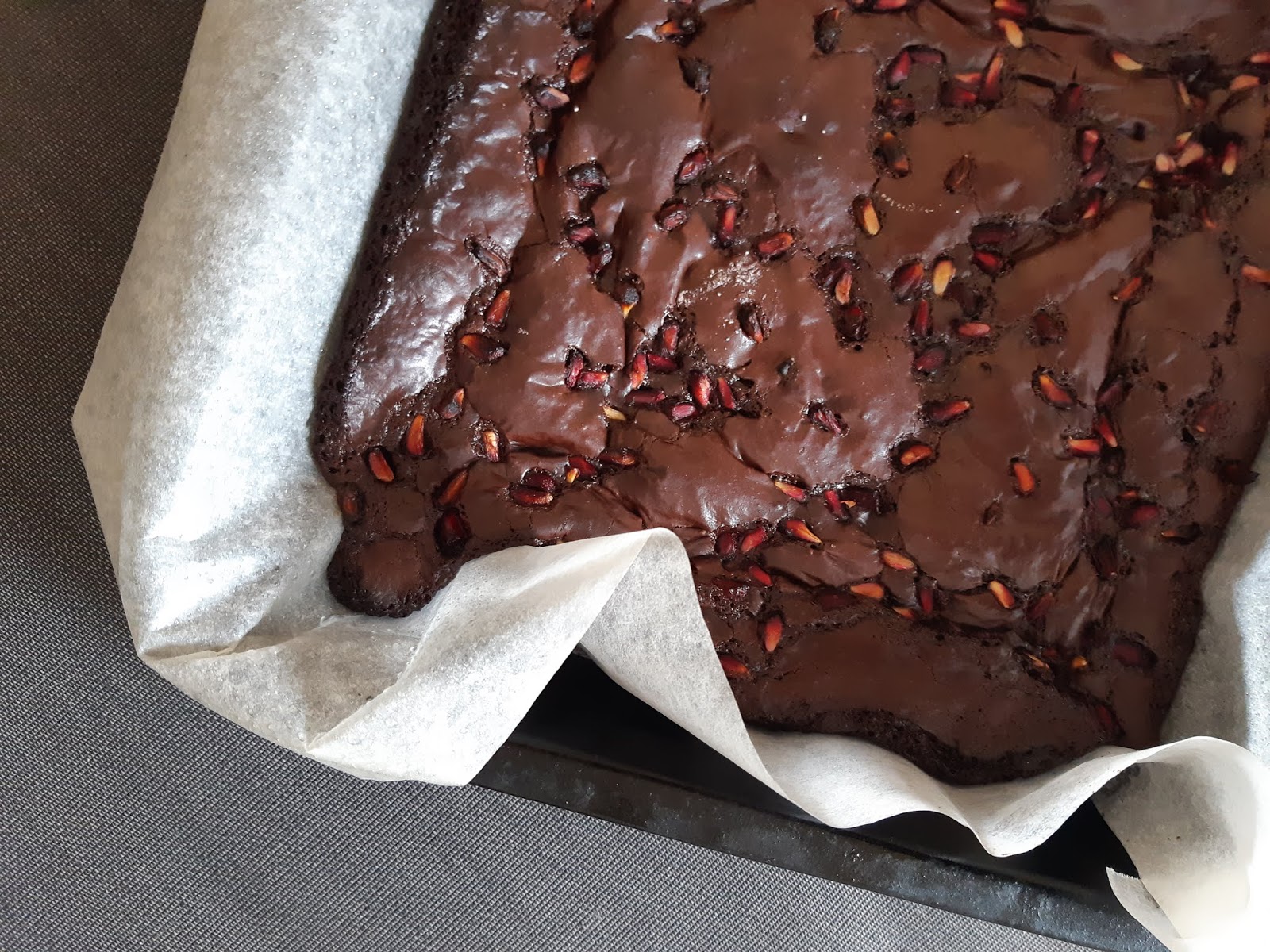 I can always rely on Serious Eats for a thoughtful but complicated way around vegan food, and so it was with their vegan brownie recipe. Calling for cocoa butter, soy milk powder and dry malt extract, I had to move beyond my own pantry and even my local shops to ready myself.

Though I'd never bought cocoa butter before, I knew it was achievable, and I was keen to bring another chocolate-based product in for the fatty component. Dry malt extract was harder, and I ended up settling for a syrup. Soy milk powder proved impossible, and I had some memory of seeing coconut milk powder around the place. Out of desperation I bought creamed coconut and this was a big mistake. My first batch of these brownies oozed with oil, and it solidified into a white tide mark around the cooled squares.

Nevertheless, they tasted great. Very, very chocolatey but also complex with that malt and a pinch of coffee. And there was this slightly elastic chewiness to them that I was into, like a thick caramel. I wanted to make them work.

The clue was in reading the recipe through a couple more times. It was designed to be packaged up as a dry mix to store in the pantry (just add boiling water and vanilla!) but that wasn't necessarily what I needed. Why use soy milk powder and boiling water when you could just use... soy milk? And how about melting the chocolate instead of processing it until it was "as powdery and fine as flour"? I rearranged the ingredient list, thinking about how brownies are typically made, and came up with the streamlined version that has worked best. I made a new, more successful test batch, and then a double batch for Michael's birthday, and then some more to use up the cocoa butter and share at a crafternoon.

This recipe and this brownie won't be everyone's favourite. It's got fussy ingredients, it's very intensely flavoured, it's barely cakey and the edges can even be tough if overbaked. But it's my kinda brownie, and it's going to take a lot to shift my allegiance to another recipe. 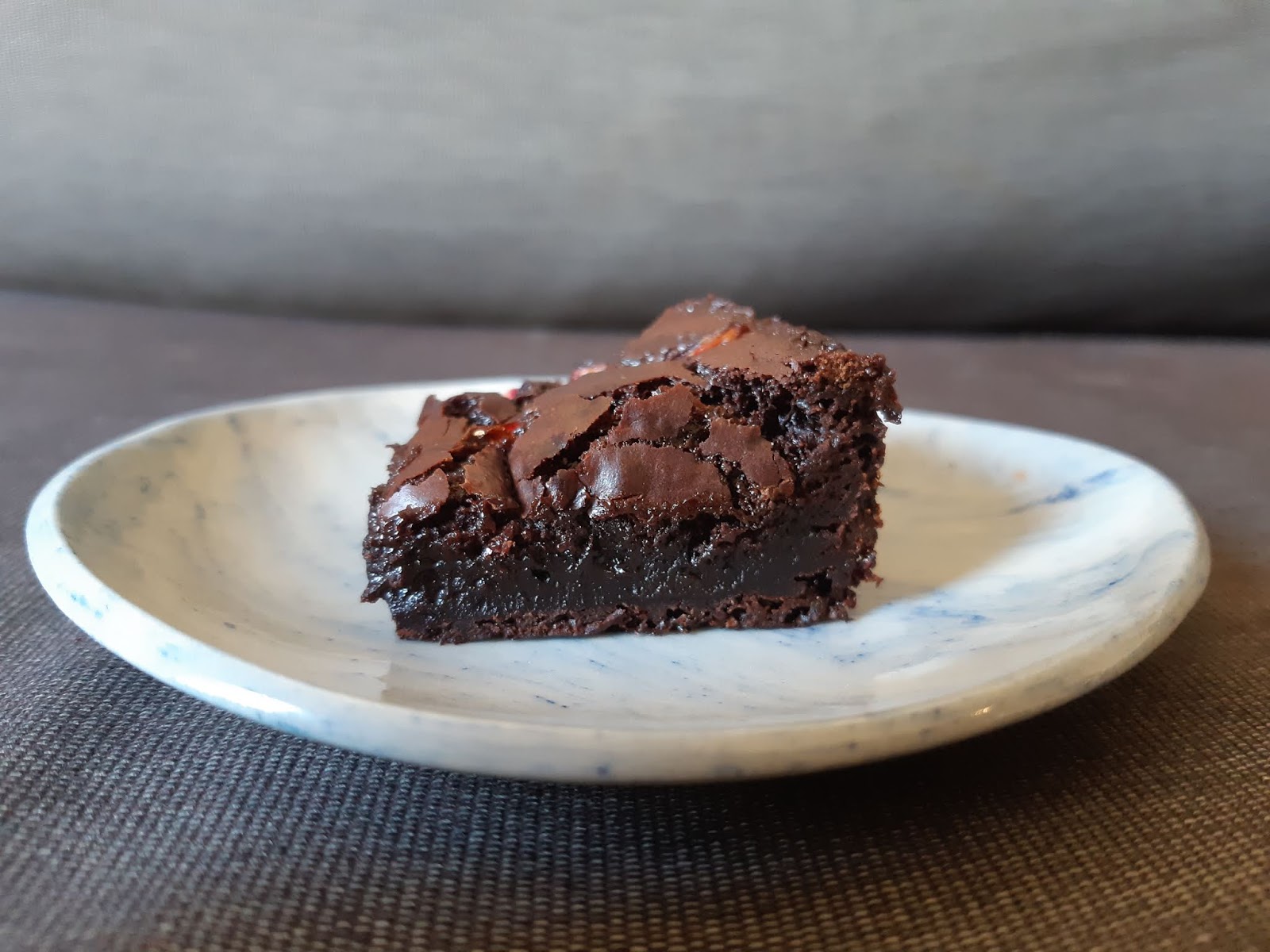 
Preheat an oven to 180°C. Line a 20cm-square baking tray with paper and lightly spray it with oil.

In a medium-large bowl, sift together the sugar, flour, cocoa, salt, espresso powder and baking powder.

Set a medium-large saucepan over low-medium heat. Melt the cocoa butter in it; whisk in the malt syrup and soy milk. When the mixture is well-combined and hot, turn off the heat and stir in the chocolate chips, continuing to whisk until the chocolate is completely melted and the mixture is smooth. Gradually stir in the dry ingredients and then the vanilla, until the batter is smooth.

Pour the batter into the baking tray. Sprinkle something over the top if you like: there are pomegranate seeds in the pictured ones; I've also left them plain, dropped frozen raspberries in, and marbled peanut butter through other batches. Bake for around 35 minutes, until the edges are firm and the centre is a little bit wobbly.
Posted by Cindy at 8:30 pm