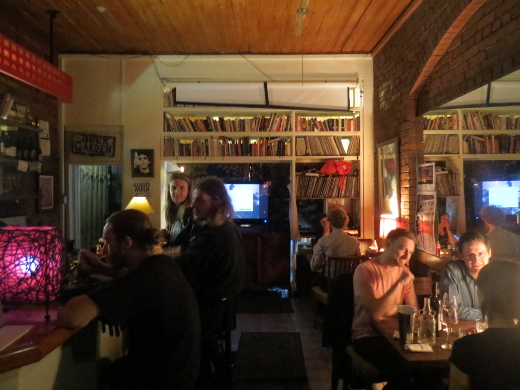 We're not exactly regulars at A Fan's Notes but we've enjoyed the couple of meals we've had there, and a retrospective facebook post got a few of us worried that the venue's Friday night vegan degustations might not make it to 2018. Rosalie rounded us up a booking for the 2017 highlights menu, and we were delighted to learn that it was simply the final degustation of the year and we could (and should!) all come back for another round of 5 courses for $50 in a month or two. Phew! 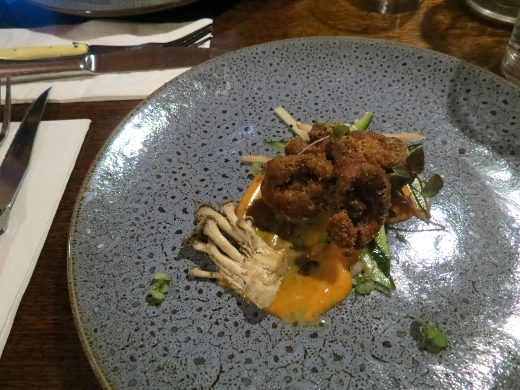 With that happy thought in mind, we took in some terrific little dishes. Number 1 was a fave: a smear of sour fermented chilli mayo mopped up with cornflake-crumbed oyster mushroom with a cluster of pickled shimiji mushrooms on the side. 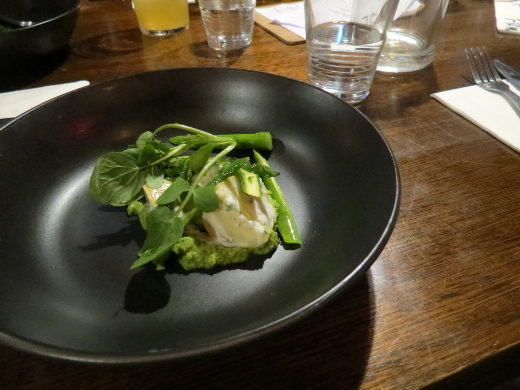 Second, we enjoyed a fancy, green potato salad, where the baby potato was also pickled, spiced up further with horseradish, then served with watercress and avocado. 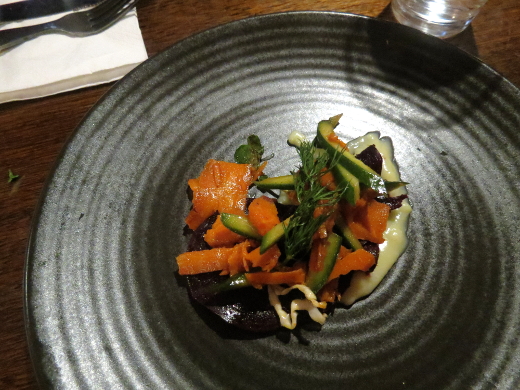 The beetroot 'pastrami' was silky and smoky but really not at all meat-like; it was garnished with a potato puree and lighter, fresher carrot, cucumber and dill. 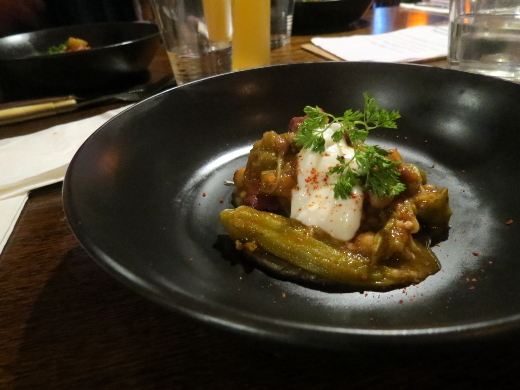 The final savoury course was gumbo, an adept use of okra! Jalapeno cream only added to the warmth of the stew, and the best bit was hiding underneath - a scoop of rice with a crispy side usually found at the bottom of a bibimbap bowl. 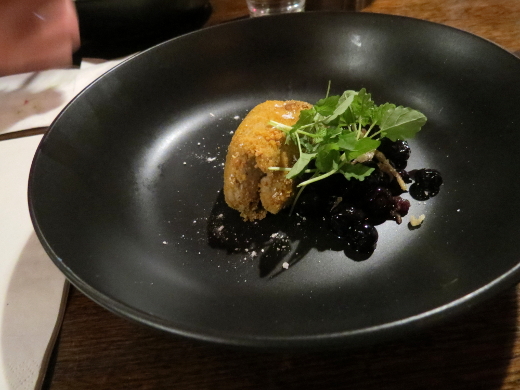 For dessert, we received scoops of biscotti-crumbed cheesecake, served with blueberries and herbs. I couldn't detect the Earl Grey or pumpkin flavours promised, but the mock-cheese was still terrific and worked well with the mellow blueberries and the candied lemon bits stirred through them. I initially pushed aside the herbs, but that was a mistake - they added a lovely extra dimension to this plate! More tangy than 'green' in flavour, I think it was lemon balm.


The portions were just enough - I finished feeling satisfied but not overfull, and very pleased at the fancy feed we'd received for $50. There are cheaper meal deals during the week, with vegan options available on A Fan's Notes' burger and parma nights. These seem more in keeping with the atmosphere - the manager-chef has made this establishment his lounge room, and has clearly identified it as a dive bar. As I took photos on a well-lit summer night, I cursed the stubbornly-closed black curtains and wondered how many potential customers walk right by without finding out what feasts lie within.


The very same meal has already been blogged on quinces and kale. We've been to A Fan's Notes for the breakfast and the degustation before.


Since those visits The Plus Ones have enjoyed the vegan degustation, ParmaDaze has admired the parma, and there's an interesting interview with the manager-chef on Inner Circle.


Accessibility: There's a flat entry way to a slightly crowded interior. We ordered at the table and paid at a high counter. We didn't visit the toilets.
Posted by Cindy at 12:08 pm