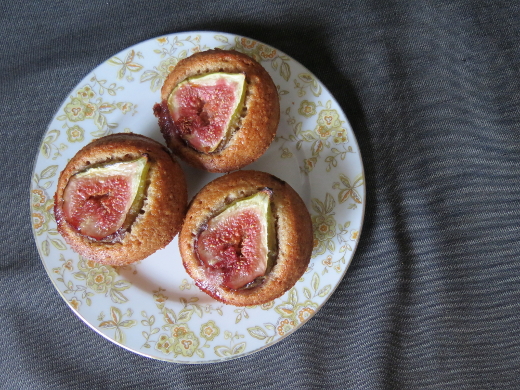 I made these little fancies because it's fig season, and because I had a few egg whites in the freezer. It's a friand recipe that makes just six serves, and it was a nice spontaneous weekend project. Enough to eat warm, just the two of us on the couch that day, and to pack into our lunchboxes a day or two after, and then be happily done before the cakes turned mushy or stale.

I expect friands to be based on almond meal, but these ones use ground walnuts instead. It makes for a darker, toastier cake that I think complements the figs very well; a dash of cinnamon and nutmeg pushes the effect even further. The original recipe uses fewer, thinly sliced figs but I set a bulbous half into each of my friands. Baking concentrates the figs' sweetness, but they stay quite fresh and juicy. That's probably why the friands deteriorate after just a few days - they're a fleeting pleasure, like fig season itself. 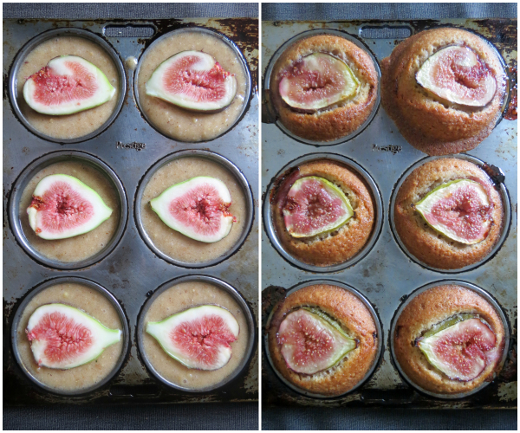 Preheat an oven to 190°C. Lightly grease 6 spots in a muffin tray.

Melt the butter in a small saucepan, then turn off the heat and allow it to cool a little.

Grind the walnuts to a coarse meal in a spice grinder or food processor.

Drop the egg whites into a medium-large bowl and beat them with an electric mixer for up to a minute, until they're very foamy. Sift the flour, cinnamon, nutmeg and icing sugar over the whites; add the walnut meal and fold everything together until just combined. Spoon the batter evenly into the 6 muffin cups.

Slice the figs in half and place one half, cut side up, gently onto the top of each friand. Bake until the batter is just cooked through, about 25 minutes. Allow the friands to cool in the tin for 5-10 minutes, then slide a knife around their edges and transfer them to a rack to cool further.
Posted by Cindy at 7:36 am