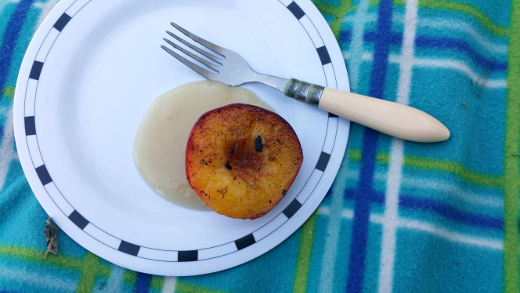 We've been having a fabulous summer of picnics... of dips and chips, and rolls and salads, noodles and cakes and fruit. (And we can always trust Steph to bring one-to-three flavours of iced tea). For this one in late January I did something new and got a public barbecue involved. It opened us up to veggie sausages, marinated tofu, 'pulled' jackfruit and seitan ribs. The fellows flipping meat on the adjacent grill hadn't seen anything like it in their lives.

This simple dessert is handy with a hotplate, too. It's just peaches, barbecued until they're juicy and lightly charred, served with a spoonful of sauce. It's too bad the sauce looks like Clag glue, because it's an actually-rather-fetching mix of coconut milk, minced ginger and caramelised sugar. Once I'd persuaded two people to dig in, their enthusiastic murmurs lured in a few more, and so on. By the time I got back from the playground with the kids there was just one warm peach half left and two or three people eyeing it off. 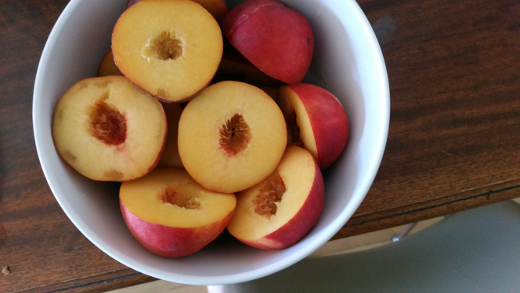 This recipe comes with a handy tip from its creator, Isa Chandra Moskowitz - peaches are most easily halved 'around the waist', not top to bottom! The pits often pop out with little more than a twist, too.

The original recipe features elegant home-kitchen grill lines on the fruit, some discreetly-hidden served-warm sauce, and a generous scoop of non-dairy icecream. I'd like that version very much, too, but Tupperware-stored sauce is enough when you're several kilometres from your freezer and already stuffed with potato salad.


In a medium-large saucepan, stir together the sugar, 3 tablespoons of the water and maple syrup. Set them over medium heat and stir regularly until the sugar is dissolved. Cook for 15 minutes, stirring occasionally. A bit of bubbling around the edges is fine, but turn down the heat if it's any more than that. The mixture should turn a few shades browner.

In a mug, whisk together the cornflour and last tablespoon of water. When it's smooth, gradually whisk in the coconut milk. Slowly whisk the cornflour-coconut milk into the saucepan. Stir in the coconut oil, ginger and salt. Continue cooking and regularly stirring the sauce for up to 7 minutes, until slightly thickened. Serve warm, or cool to room temperature and store until you're ready.

Halve the peaches by slicing them 'around the waist', not top to bottom. Twist and/or cut out their pits. Place the peach halves in a large bowl; toss through the lemon juice and oil.

Heat up a barbecue or grill pan and cook the peaches - about 7 minutes on their flat sides, followed by 2 on their round side. They should be more tender but still holding their shape, with a light surface char. Serve with the sauce poured over or on the side.
Posted by Cindy at 8:00 am