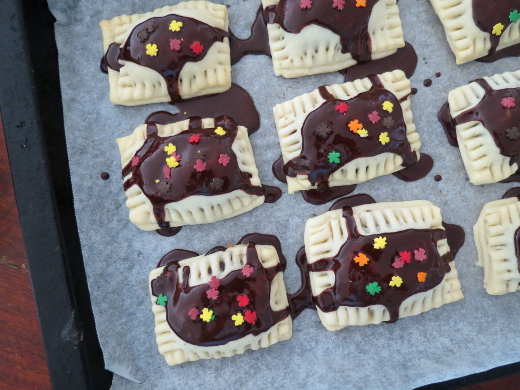 While I was in the US, missing Michael and cooking stuff together, we agreed that we'd try making the Street Vegan poptarts when I got home. While I would have happily embarked on them any old weekend, we had a nice opportunity to bake them for a 2-year-old's birthday party and share them around.


Michael picked out the peanut butter-chocolate filled version and I set to work a day in advance. The filling is a simple, reliable mix of chocolate ganache swirled with peanut butter. The pastry is made with electric beaters and includes egg replacers, which isn't my usual pace. It seemed too mushy and I upped the flour to make a more sturdy, rollable dough (I've adjusted the quantities accordingly below). 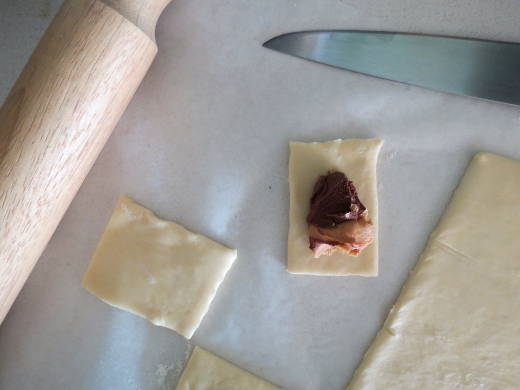 On the morning of the party I set to work assembling and baking the poptarts. The recipe's designed to make 10 hefty tarts but instead I cut at least twice as many two-bite treats. I barely used half of the filling since my mini-tarts had a higher edge-to-middle ratio (again, I've altered the recipe below for a better fit). The edges sealed easily with a fork just so long as I didn't dust too much flour around.


It was difficult to work out when the poptarts were fully baked since they're not supposed to brown. I gave 'em a few extra minutes on a hunch and they were still a little underdone - I'd suggest eating a tester before you progress to the icing stage. Once you spill the glaze over them there's no going back! The original recipe suggests using chocolate glaze all over and white vanilla glaze in decorative stripes, but I thought some coloured sprinkles would be less fiddly and for an audience of under-5s.


Indeed, I overheard one youngster declare these poptarts his favourite food at the party. A couple of adults got a real kick out of them too. I'm not quite convinced that they're better than a more conventional pie or tart, but they were a fun little party project to share with friends. 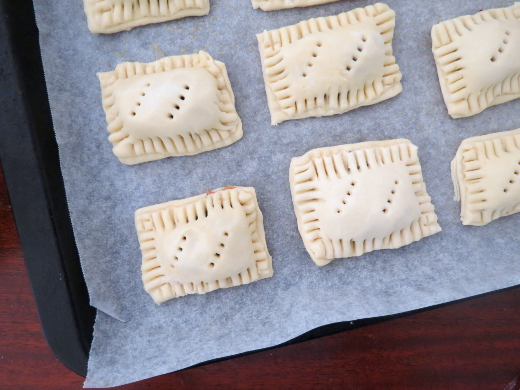 
Place the vinegar, egg replacer and water in a medium-large bowl and beat them together with an electric mixer until foamy. On low speed, mix in the flour, salt and margarine until the mixture comes together as a dough. Allow it to rest for at least 15 minutes - I covered my bowl with a lid and refrigerated it overnight.

In a medium bowl, bring the soy milk to the boil. Take it off the heat and stir in the chocolate chips and salt. Keep stirring them together until they form a thick, smooth ganache. Chill the ganache for at least 2 hours, I refrigerated it overnight. When it's time to assemble the poptarts, swirl the peanut butter through the ganache.

Line 1-2 baking trays with paper and lightly spray them with oil. Preheat an oven to 180°C.

Lightly flour a clean surface and roll out the pastry to 2-5mm thick (I did this in about 4 small batches). Slice the dough into rectangles of the same size - mine were about 4cm x 6cm, but the recipe was designed for larger ones. Spoon filling into the centre of half of the rectangles, place the other rectangles on top of each once, and use a fork to crimp the edges together (see photo above).

Place the pastries on the trays and bake them for 15-20 minutes, until they're a little firm. Allow them to cool to room temperature.

Sift together the icing sugar and cocoa in a small-medium bowl. Stir in the soy milk to make a smooth glaze. Spoon the glaze over the centre of the poptarts and decorate them with coloured sprinkles. Allow the glaze to set at room temperature for at least an hour before serving.
Posted by Cindy at 11:34 am