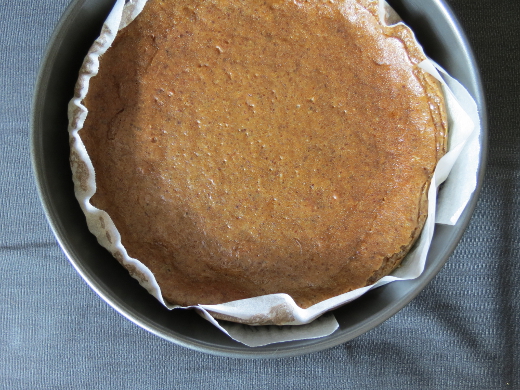 Paula Deen's website does hold a few memorable dessert recipes but I wasn't confident that my friends at the Celebrity Chef picnic potluck would actually want to eat them, vegan or not. I switched over to the more staid Martha Stewart and picked out a gingerbread cheesecake, ripe for the veganising.

Stewart does have her own fussy way of overdoing it. In this recipe she would have us bake a half-batch of Molasses-Gingerbread Cookie dough, only to blend most of it into crumbs for the cheesecake base. I was not so inclined, particularly given that a packet of crushed LEDA gingernuts would guarantee me a gluten-free as well as vegan dessert.

For the filling, a few containers of Tofutti Better Than Cream Cheese and some blended up flax 'eggs' saw me through. I respectfully disagree that Tofutti's product tastes Better Than Cream Cheese, and made sure to increase the molasses and spices to mask it. Some website commenters recommended baking the cheesecake longer for a good set, and I'm glad I followed through; if only I'd remembered to refrigerate it before I went to bed, mine might have held it together a little better!

I'm sure my cheezecake was but a cruelty-free shadow of Stewart's, but it was complimented widely at the picnic. The dry gingernut base softened beautifully, the filling was flecked with flax seeds and had a slight almost-metallic molasses aftertaste. 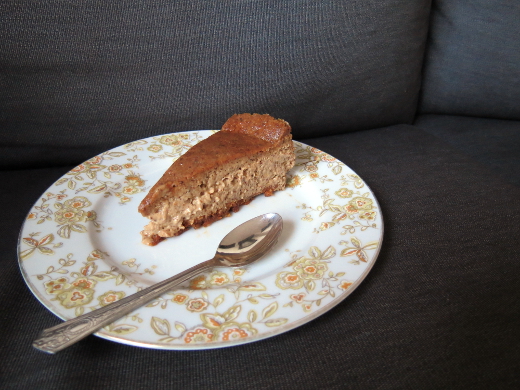 
Line a springform tin with baking paper. Preheat an oven to 160°C.

Crush the gingernuts to a coarse powder - I place them a few at a time between baking paper sheets and smash them with a rolling pin. Place the crumbs in a small-medium bowl. Melt the margarine in a small saucepan, then pour it over the gingernut crumbs and stir through. Press the crumbs into the base and partway up the sides of the springform tin.

Grind up the flax seeds and blend them with the water; set aside. Place the cream cheese in a large bowl and beat until smooth. Beat in the caster sugar and vanilla. Thoroughly beat in the flax mixture. Beat in the remaining ingredients until the mixture is very smooth. Pour it into the springform pan.

Bake the cheesecake for 60-90 minutes, until it's set but still a little wobbly in the middle. Allow it to cool on the bench, then refrigerate it for at least 4 hours (preferably overnight) before slicing and serving.
Posted by Cindy at 10:44 am