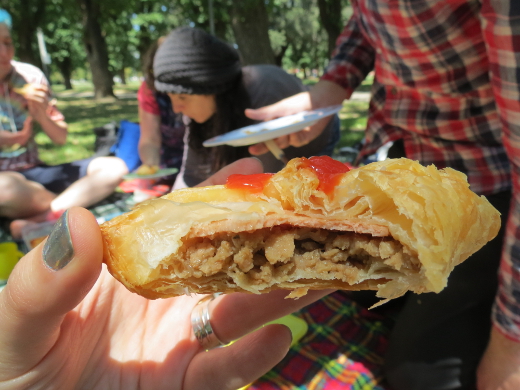 We joined a gang of veg*n bloggers and associated hangers-on for a potluck picnic in Edinburgh Gardens this past weekend. The potluck was organised by Steph, who added the fun/complexity of a 'celebrity chef' theme. The easy option would have been to fall back on one of the many crowd-pleasing Ottolenghi or Isa recipes we've made before, but we decided to embrace the spirit of the theme more thoroughly and veganise some unlikely celebrity chef dishes.

Cindy had oodles of fun trawling her way through the slightly terrifying Paula Deen archives, weighing up options like the bacon cheeseburger meatloaf and the banana split brownie pizza - this Guardian rundown outlines just how horrifically unhealthy (and unvegan) Deen's cooking style is. In the end, after weighing up the picnic-appropriateness and veganisability of various mad recipes, we settled on these mini cheeseburger puffs, which basically involve wrapping the fillings of a cheeseburger in puff pastry. 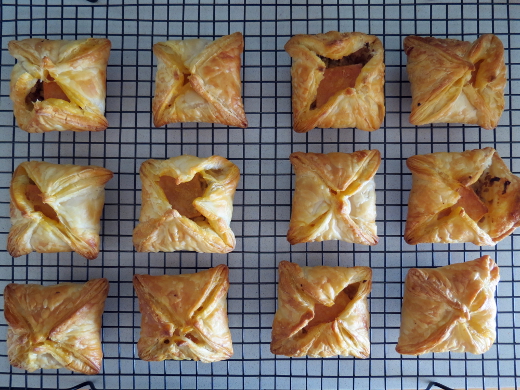 With TVP replacing the the ground beef, Tofutti's American cheese slices filling in admirably for crappy cheddar slices and some squares of mock bacon adding our own special touch, these were a gloriously unhealthy vegan sensation. This is about as far from wholefoods as it gets. They were a huge success though, especially with generous dollops of tomato sauce on top. 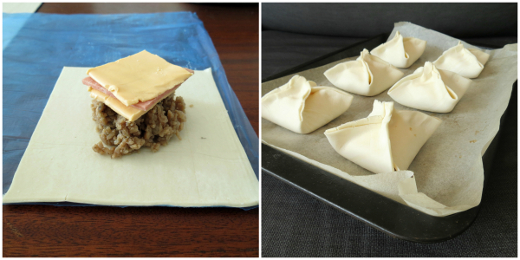 They're a bit fiddly to make - the TVP-based mince doesn't hold together as a burger patty at all, so you have to just scoop up a big spoonful of the mix into the centre of each pastry square (see above). Don't skimp on the homemade seasoning - the TVP is pretty flavourless on its own, so you really need to go crazy with the salt and spices. We made up our own versions of Paula Deen's silly salt and steak seasoning. The quantities below make 24 pastries, so consider halving it if you're not feeding a picnic full of hungry vegans.

The picnic food was all incredible - Johanna has already posted up her dishes, keep an eye on Veganopolous for a full round-up as well.

Soak the TVP in the boiling water for 10 minutes or so, until the water is absorbed.

Fry the rehydrated TVP with the onion for about 5 minutes. Stir in the seasoning, then kill the heat and let the mix cool to room temperature.

Defrost the pastry sheets. Make the puffs up - each one needs one quarter of a sheet of the puff pastry, a tablespoon of the burger mix, two cheese squares and one ham square (see above).

Fold the four corners of the pastry up to meet in the centre and cover the filling (see photos above). Pinch the corners of the puff pastry squares together and partially along the seams, leaving a few little air holes along the edges.

Bake for 20 minutes, until the pastry is crispy and golden. They're delicious fresh out of the oven, but just as good served later at room temperature.
Posted by Michael at 8:02 pm