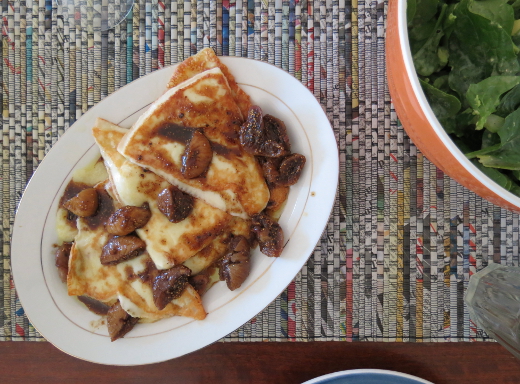 We haven't been to Hellenic Republic for several years, but we still regularly recall the excellence of their saganaki with peppered figs. Saganaki is pretty great any time, and pairing its salty creaminess with sweet dried fruit and a kick of peppery heat was a revelation. Haalo had a recipe published on Cook Almost Anything within months and we're only just now trying it for ourselves six years later.

There's a bit more going on here than just pepper and figs - Haalo has us simmering the dried figs in honey and balsamic vinegar, bay, vanilla and cloves. I adapted on the fly (honey => maple syrup, cinnamon stick => ground cinnamon) and tended it all for a solid hour on the stove. If anything I was too light on the pepper.

The saganaki was a little less simple than I anticipated too. The dusting of flour was fine, but unlike its cousin haloumi, these saganaki triangles bubbled and melted and glooped all over the pan! They're clearly at their best with a fast and dry fry.

They're lessons learned for next time, and they barely lessened our enjoyment this time. This salty, sweet and spicy goodness went down a treat with a huge, tangy green salad.


Slice each of the figs in half and place them all in a medium-sized saucepan. Add in the maple syrup, balsamic vinegar, pepper, cinnamon, and bay leaf. Slice the vanilla pod lengthways, scrape the seeds into the saucepan and drop the vanilla pod in too. Add in the cloves. Pour over enough water to cover all the ingredients and simmer them until the figs are soft and the liquid is reduced to a syrup, about an hour. Remove the bay leaf and cloves. Keep the figs and syrup warm.

Slice the saganaki lengthways into 5mm-thick pieces, and lightly dust each piece with flour. Heat just a little oil in a frypan over medium-high heat. Place the saganaki slices in the pan and fry them until just golden on each side (this could take less than a minute!). Serve the saganaki immediately with the figs and syrup spooned over the top.
Posted by Cindy at 7:58 pm