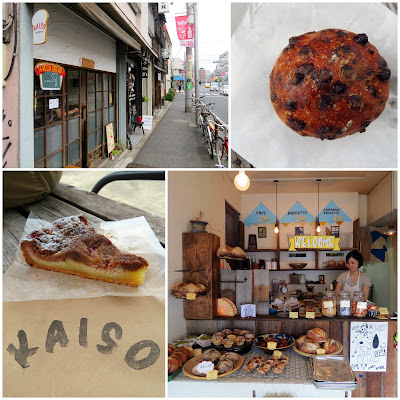 We headed to Shimokitazawa on Thursday morning, a neighbourhood known for its vintage shops and hip eateries. In typical hip style, nothing was open until 11am and many shops didn't begin trading until 1 or 2pm. Michael wanted breakfast from Kaiso bakery (another Lee Tran Lam rec), so we wandered the blocks until the clock ticked over and we could check out their offerings. The food labels had more French than English and the savoury snacks looked suspiciously meaty, with the four cheese bialy than LTL mentioned only available later in the day. We were satisfied with the more-choc-chip-than-bread Choco (250円 ~ AU$2.60) and slice of Tarte du Mois (i.e. pie of the month, 450円 ~ AU$4.70), which worked a sturdy-to-delicate spectrum from pie crust to well-baked frangipane, fruit slices and sugared top. 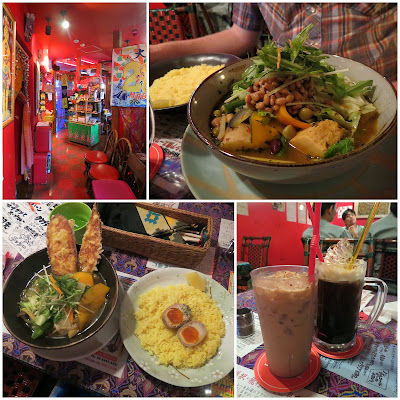 With a couple more hours of strolling and second-hand shopping, we had an appetite for lunch. Michael tracked down Magic Spice, a psychedelic cafe that specialises in soup curries and allusions to tripping. From their English menus we were able to deduce that the standard process is to select a soup curry base and a spice scale from The World Of Mysterious Hotness - chilli wusses start at Awakening, while the more adventurous can work through Meditation, Ecstasy, Nirvana, Paradise, Raputa ("provokes consciousness flying in the sky") to Aum Air ("awakening of a super sense of extreme hot space") for an extra couple of dollars. Then there's a range of extra toppings to select for your soup, and sweet-hot-acid condiments at the table.
Michael started with a Vege-Bean soup at Nirvana, adding natto and Koya (freeze-dried) tofu (1030円 + 200円 + 120円 + 110円 ~ AU$15.30). I had my Vege-Mush at the tamer Meditation level, adding tempura sweet potato slices and aji-gotti, a "seasoning egg with soy taste" (1100円 + 100円 + 110円 + 140円 ~ AU$15.20); little did I know that there was already half a boiled egg at the bottom of my soup. This meal had the kind of volume and variety that had me going for hours (almost literally) - I really liked the combination of tender-cooked and fresh raw vegetables, the flavour of the clear broth and had no hope of getting through the side of rice. The drinks we ordered - a Thai iced coffee for Michael (530円 ~ AU$5.50) and an iced chai for me (510円 ~AU$5.40) - were similarly huge and very sweet, so we ended up saving them for dessert.
This was a really fun experience, albeit one that vegans would probably struggle to navigate. In fact, we left wondering if the stock base might've been chicken too. 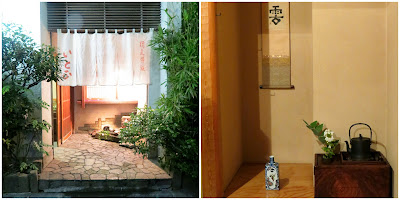 We had no such doubts at Itosho, a vegetarian restaurant that's been running for more than forty years under the helm of chef Hiroharu Ito. Like Bon, which served the most expensive and memorable meal of our last Tokyo trip, Itosho upholds the tradition of shojin ryori, i.e. Buddhist temple cuisine. For 8400円 ~ AU$87.80 each, Michael's family all joined us for a multi-course meal at this Michelin-starred restaurant. 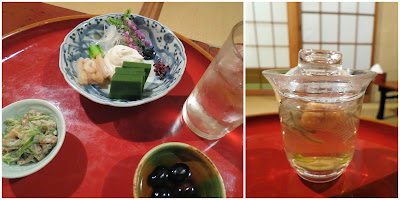 The restaurant's capacity is small and Chef Ito presented almost all the dishes to us personally, describing them in Japanese to Michael's more fluent siblings. Our first bowl was arranged with walnut-studded silken tofu, gluten, ginger, mushrooms, matcha jelly and tiny purple flowers - I was reluctant to mix it all together as instructed, but the delicate flavours and textures stayed intact. The sesame sauced side vegetables and surprisingly sweet black beans were also fun to pick at.
The clear cup of renkon/lotus root soup didn't charm everyone in our group but I liked it well enough, particularly the single chestnut dumpling that bobbed on the surface. 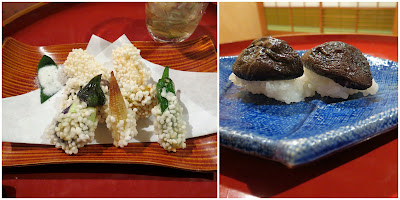 Ito's take on tempura was a resounding success by contrast - a tofu slice, shitake mushroom, cornlette, pumpkin piece, eggplant piece and pepper were each coated in crunchy mochi flour pebbles and served with seasoned salt for sprinkling.
Shitake reappeared in the following course as the subject of simple but excellent sushi. 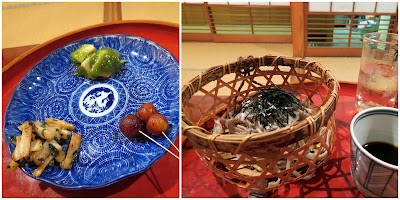 Larger blue plates laid out samples of tiny lacquered potato spheres on toothpicks, tender marinated lotus root and gluten pieces in a green plum sauce. It took this second serve of gluten for me to really appreciate how light and almost gelatinous it was compared to the dense seitans we're accustomed to. I recalled that we'd been served something similar at Kajitsu a couple of weeks earlier.
Open-weave baskets held handmade soba noodles with shredded nori and a little wasabi. We dipped them into the cup of soy sauce, marvelling at their fresh texture. 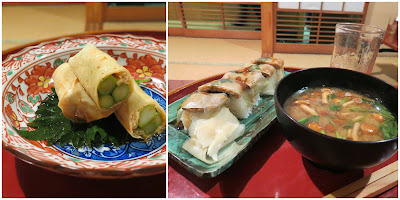 Asparagus wrapped in yuba tasted fresher still. (One day, I hope, I will master yuba preparation at home.)
We were feeling a little overwhelmed by the time the tofu-and-burdock imitation fish sushi arrived - their brilliance was almost wasted on us bloated customers. The cloudy mushroom soup was also very, very good - I imagined what a wonderful lunch this single course could make. 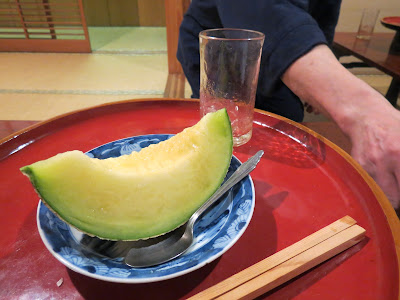 Relief was at hand, with a melon wedge each served for dessert. It was a soothing finish to a marathon of a meal.
It was an evening that filled me with gratitude (as well as vegetables!) - what a privilege to be served by such an accomplished chef, to get a glimpse of an ancient vegetarian tradition, and to share it with Michael's receptive but not-at-all-vegetarian family.
Posted by Cindy at 7:51 pm