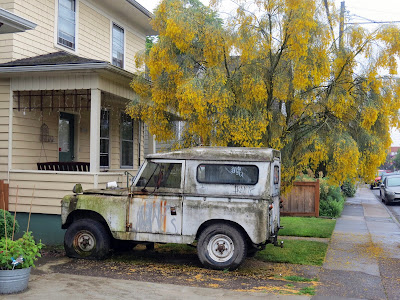 Thursday started with another trip to the south east suburbs for breakfast at Paradox Cafe and a trawl through the op-shops of SE Hathorne. Paradox is a large diner-style place with a low-key style and laid-back (i.e. friendly but slow) service. The menu reminded me a lot of Junior's Cafe - classic US diner food done mostly vegetarian or vegan (there's meat on the menu, but nearly everything has a tempeh/tofu version). 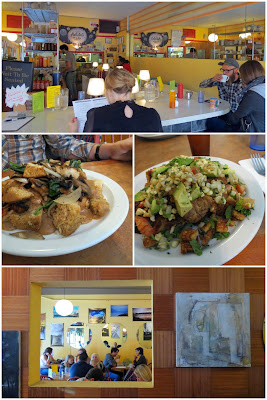 We split two dishes: the HOG pile - grilled tofu, mushrooms and onions scrambled with spinach, served over herb and onion bread and all swimming in gravy (US$8.50 ~ AU$9.10) and the sweet corn and green chilli potato cakes were covered in roasted corn and fresh avocado, adding some colour to the grilled tempeh (US$8.50 ~ AU$9.10). It was a ludicrous amount of food again, but we managed to work our way through it all - the herb bread and gravy combo was particularly winning (if completely unhealthy).
Stuffed with food, we explored SE Hawthorne for a couple of hours, browsing the op-shops, book shops and gift shops and weighing up luggage space vs the excitement of holiday spending. Eventually we worked up enough hunger to justify our trip to one of Portland's oddest must-do tourist experiences: Voodoo Doughnuts. We took Erik's advice and went to their second store (NE Davis) to avoid the massive queues of the downtown branch - the queue was definitely shorter, but the store was still rammed with people the whole time we were there. 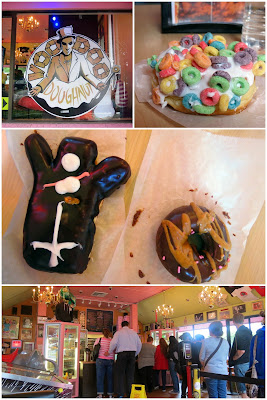 Voodoo has somehow become a phenomenon - the stores are open 24 hours a day and are constantly busy, with streams of people gorging themselves or loading up boxes of doughnuts to take home as souvenirs (we spotted a few of their striking pink boxes at the airport as we flew out). They made their name selling crazy concoctions - doughnuts glazed with NyQuil or flavoured with Pepto-Bismol and dotted with Tums. The FDA eventually put a stop to the pharmaceutical doughnuts, but the store was already famous and they've continued to thrive by offering a baffling array of doughnuts to choose from - there's toppings like cap'n crunch, bacon, and Oreos as well as more conventional options, loads of vegan doughnuts and their signature voodoo doll doughnut, a chocolate coated little guy with a pretzel for stabbing and a torso full of gooey raspberry jam. We ordered a froot loop doughnut and a vegan pumpkin doughnut with chocolate frosting to really embrace the experience. It was fun, but I'm not sure I really understand the allure beyond the novelty value.
After a sugar-induced afternoon breakdown we headed north again to check out Last Thursday, a once-a-month street party that shuts down 15 blocks of NE Alberta (home to Back to Eden and Salt and Straw). The plan was twofold: start the evening at the much-vaunted vegan pub The Bye and Bye and then wander the streets and check out the party. Heartbreakingly though, The Bye and Bye had picked Thursday night to close for 'maintenance', leaving me cranky and hungry and without a real plan. After a bit of aimless wandering and a few near-misses at food carts (the range of mac and cheeses at The Cheese Cart nearly lured us in), I remembered reading some glowing reviews of The Bollywood Theater and we went to check it out.
With crowds of people in the neighbourhood for Last Thursday there was, unsurprisingly, a line of people streaming out the door. We joined it pessimistically, only to marvel at how quickly the restaurant was managing to shuffle people in, take their orders, get them seated and load them up with food. We were eating within half an hour I'd guess. 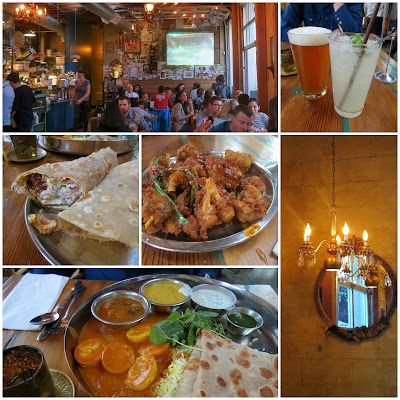 And we were eating well! The focus of the menu is Indian street food, so there's lots of little snacky dishes to choose from. Cindy went with two small dishes - the incredible gobi manchurian (fried cauliflower florets with lemon, curry leaves and a sweet/sour/spicy sauce, US$6.50 ~ AU$7) and a paneer kati roll (paneer, pickled onion and chutney rolled in paratha, US$6.50 ~ AU$9.10). She's still dreaming about that bread. I couldn't resist a big plate and ordered the egg masala thali - boiled eggs in a spicy tomato and yoghurt curry, with saffron rice, sambar, dal, raita, green chutney and paratha (US$12 ~ AU$12.90). It was a ludicrously sized feast of amazing flavours. Our meals had us wishing we could sample more of the menu (the spicy potato dumpling burger and the samosas both called out to me), but we couldn't do it. We didn't eat very vegan friendly meals here and the menu doesn't provide any clear labelling, but the internet assures me that there's a special vegan menu at the counter and that the options are plentiful and tasty.
After wandering through the street party some more - break dancing, dodgy stalls, some cute little art galleries - we found our way to dessert via another trip to Back to Eden Bakery. We had to try their vegan soft-serve icecream, and US$6.50 (~AU$7) scored us a Sauvie Island (soft serve, almonds, coconut flakes and berry sauce). It did not disappoint. The ice cream is apparently soy based (made by these guys) but it didn't have that off-putting tofu after taste. Not quite as impressive as the fancy flavours at Salt and Straw but a brilliant vegan alternative, enhanced by excellent toppings. 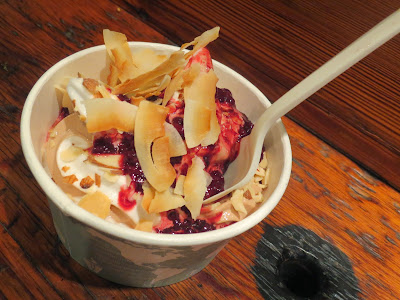 Fully sated and with darkness approaching we made our way back to the bus stop for home. The street party ends very abruptly at 9:30 when the street is reopened to traffic, but the Prince tribute act kicking out the jams in the foodcart pod kept us rocking until it was time to depart. 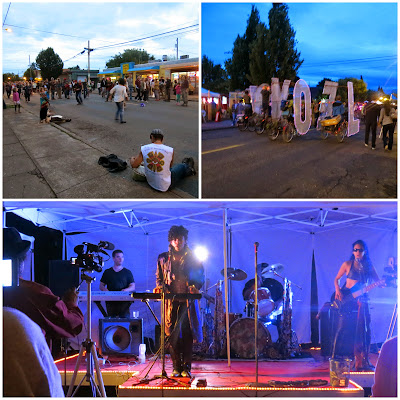