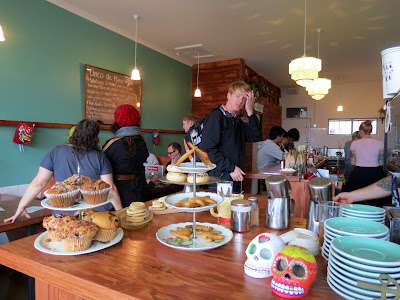 Cindy and I finally got our act together and visited The Heide Museum on the weekend, something I'd failed to do in over seven years of living in Melbourne. One of the reasons we hadn't made the trip before was transport, so when we realised that the best bus there passed by Sydney Rd in Coburg we decided to make a day of it. Stop one: breakfast at Coburg's newest (and probably hippest) cafe - True North. 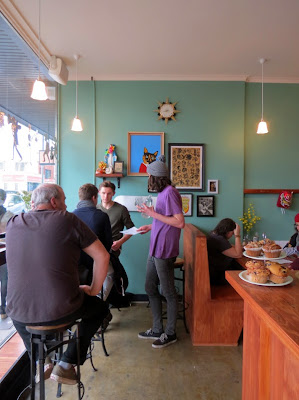 It was bustling when we arrived around midday, and we waited a minute or two for a table to clear before nabbing a spot in the back corner. The signs were promising when the first question we were asked was whether either of us were vego or vegan. It turns out that True North have made a real effort to cater for vegos - they've got vegan bacon, chorizo and chicken to sub into many of their dishes and have just started stocking vegan cheese as well. A lot of the savoury menu is egg based, so vegans will have to do a bit of substituting, but the staff were helpful and knowledgeable, so I'm sure there'd be plenty of options. We noticed muffins from Crumbs at the counter as well, which is a promising sign.

The cafe in general has a bit of a Mexican vibe - there's huevos rancheros on the main menu and the three specials were all heavy on the chorizo/chipotle flavour combinations. There's the usual array of beverage options alongside one unique choice - house made kaffir lime lemonade ($4.50). Cindy couldn't resist. 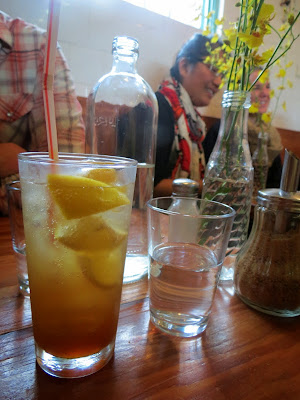 It was a brilliant choice - tangy and sharp with just enough sweetness to balance out the citrus. A high class lemonade.

Cindy's heart had been broken by the unavailability of the waffles (with candied banana, maple butter, toasted pecans and bacon, $15.50), but she recovered enough to order the True North breakfast roll (a fried egg, mock bacon, bubble 'n' squeak served with house made relish on a toasted white roll, $13). 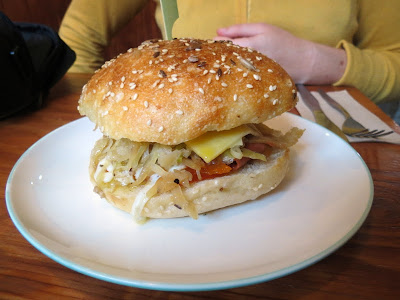 It was a very mushy roll - runny egg yolk, free form bubble and squeak and loads of relish. Not pretty, but pretty damn delicious - the mock bacon (this brand we think) was good stuff too.

I opted for the baked eggs with chorizo ($15) and had my pick of about fifteen different types of hot sauce to accompany things. 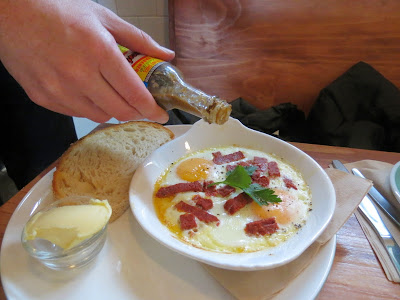 This was a very satisfying dish - the eggs baked through but with a hint of runniness in the yolk and the Cheatin' brand chorizo chunks adding surprisingly good bursts of smoky mock-meat.

I was super impressed by True North - our food was great, the provision of mock meat alternatives always makes me happy, but more than just that we found the staff lovely and friendly (even while under some pretty serious weekend-rush pressure) and the vibe of the place cool without being painful. Coffees are good, prices are reasonable and the whole experience is one I'd happily repeat again soon - score one for Coburg!
____________

So far only Green Gourmet Giraffe has blogged about True North - she seems to be quite a fan.

Accessibility: There's a small step on entry and a pretty crowded interior (especially on the weekends when the stools at the bar are in use). You order at the table and pay at a medium height counter. The toilets are out the back via what looked like a carpark - we didn't visit, but they'd require negotiating a step or two at least.
Posted by Michael at 9:34 am