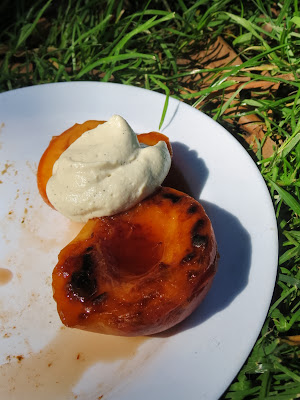 So happy was I with our grilled figs and cashew cream that I tried another version for a picnic with Another Outspoken Female and the Significant Eater. This time I picked up late season just-starting-to-wrinkle peaches, slathered them in a syrup based on apple-raspberry juice, and spiked my cashew cream with lemon zest.


I didn't quite achieve the deep berry flavour I'd envisaged and the lemon zest faded into the background, but the peaches were golden and tender while the cream was fluffy and flecked with vanilla. I can definitely recommend grilled fruit and cashew cream as a light dessert that's simple to prepare and difficult to ruin, infinitely adaptable and handily bike-transportable. 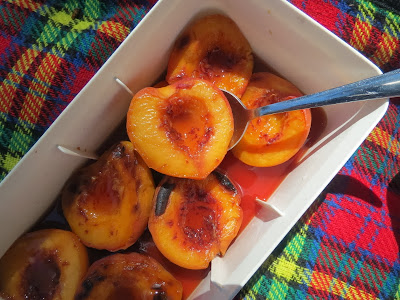 Cover the cashews in water and soak them overnight. Drain the cashews and blend them with the soymilk, lemon zest, vanilla and salt, until they're completely smooth.


In a small saucepan, stir together the fruit juice, sugar and Cointreau over medium heat. Continue to simmer this sauce until it has reduced by half, around 5-10 minutes.


Slice the peaches in half and remove their stones. Arrange the peach halves in a heat-proof flat dish (I used a pie dish) and gently pour over the syrup. Place the dish under a grill until the peaches are warm and starting to brown; turn them over and give them a couple of extra minutes on their second side. Serve two halves per person with a spoonful of syrup and big dollop of cashew cream.
Posted by Cindy at 10:05 pm