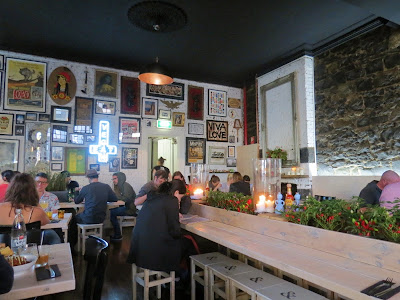 We had a brilliant time at the launch of Smith & Daughters and figured we shouldn't waste any time heading back and seeing how it stacked up when we weren't being plied with free cocktails. The opening weekend seemed like a big hit - we squeezed in on Sunday night but things were busy, busy, busy. The menu is sizable, meaning we were able to piece together a whole meal without doubling up on anything we'd eaten during the preview night. We got the ball rolling with some outstanding cocktails - a gangster horchata for Cindy (cognac, house-made horchata, espresso, orange liqueur and a splash of bitters, $16) and an old Cuban for me (dark rum, fresh lime & mint, topped with champagne and a splash of bitters, $16). 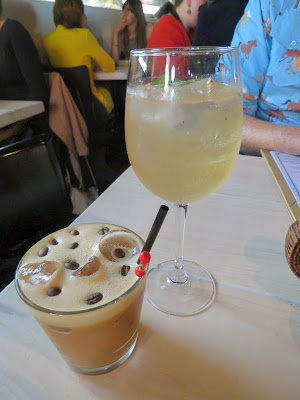 We mostly worked our way through the small dishes, starting with a slice of the tortilla (hearty potato and onion Spanish omelette, served with garlic aioli, $7). 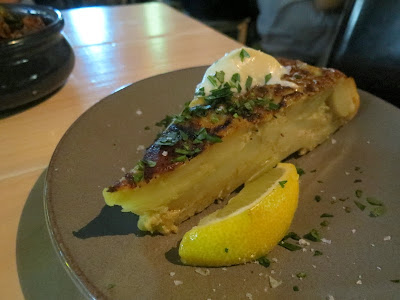 This is a dish we've enjoyed non-vegan versions of elsewhere, and Smith & Daughters do a pretty fine job of taking an eggy dish and cranking out an excellent vegan rendition. 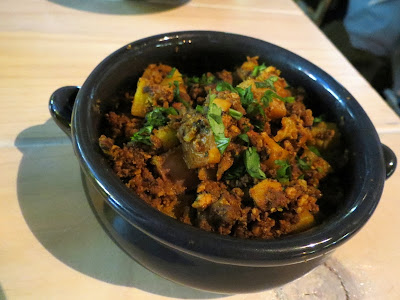 We couldn't figure out what the chorizo was made out of - I thought it had a bit of a TVP vibe, while Cindy thought it might have been built around black beans and mushrooms. Either way, it blended nicely with the potatoes and an extra dollop of hot sauce. It wasn't a world changing dish, but it was a solid contribution to the meal.

We also tried a sample of the tacos (1 for $6, 3 for $14), taking one of each of the three flavours on offer: spicy chorizo and potato, jackfruit carnitas and mushroom, nopales and sweet grilled corn. 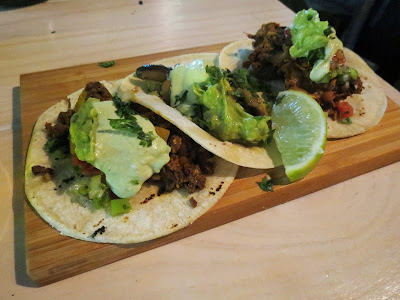 The potato and chorizo actually worked much better as a taco filling than on its own - it was great on these fresh tortillas. In fact, all the tacos were excellent - the jackfruit carnitas were spicy and had a great meaty texture and the mushroom based filling was tangy and fresh (we think it's the same filling as you get in the tamales). 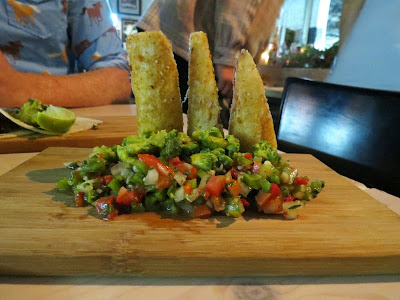 We were hoping this would provide a burst of freshness to offset all the delicious fried things we'd been enjoying - the salsa served that purpose, but the hearts of palm were surprisingly fritter-y, with a light batter and a soft middle. It was excellent.

We couldn't walk away without another shot at the desserts. First of all we went back for a second taste of the tarta de chocolate Azteca (served with avocado icecream, $14). It was just as good as we remembered - the avocado icecream offset its richness with some smooth coolness, but it's really all about the spicy, jammy tart. 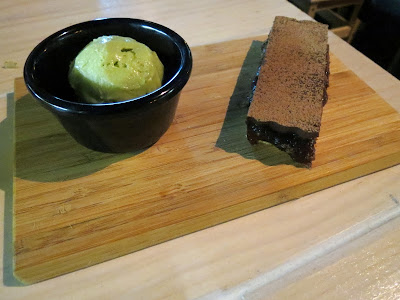 We also tried the one dessert we hadn't had a taste of - a Mexican flan (a sweet Mexican custard, made with almond milk, cinnamon and topped with burnt caramel, $12). 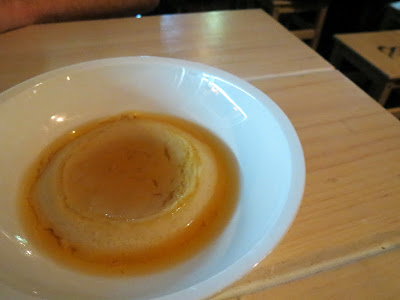 I didn't mind this - the custard had a rich flavour and I thought there was a hint of something boozy in the syrup. It was okay, but at $12 it wasn't great value and not a patch on the chocolate tart. 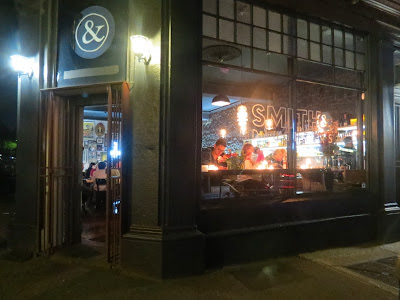 Our second visit to Smith & Daughters was nearly as successful as our first - the staff were incredibly lovely, but were run off their feet with the crowd, slowing things down a bit. The food was great, with the tacos, heart of palm salad and omelette particular highlights (plus the chocolate tart of course). The one weakness of the Smith & Daughters menu is the lack of some salads or fresh veggie dishes to cut through the richness - it's the kind of place you visit to really indulge. Similarly, you're not going to head there for a budget meal - we spent about $75 on food alone, which is more than you'll wind up racking up at Yong or The Fox. But it's worth it - if you're up for splashing out, you really can't go too far wrong here - there's a hip, slightly up-market vibe that no other veggie place in Melbourne can match, loads of imaginative, tasty dishes and a drinks menu that will knock your socks off.
____________

You can read our summary of the restaurant launch here, along with lots of write-ups of the same event on omni blogs: Foodie About Town, Eat And Be Merry, For Tomorrow We Die(t), Gastrology, Petit Miamx and Melbourne Din(n)ing Blog.
____________


Accessibility: The entry is flat and narrow and the tables are pretty crowded. The interior was loud and dimly lit. Toilets were located up several steps, were gendered and of standard dimension. There's full table service.
Posted by Michael at 8:18 am