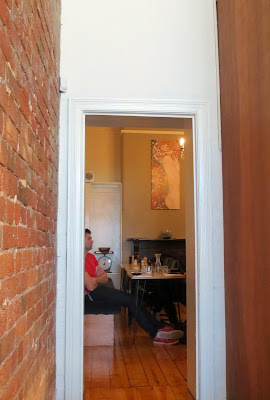 Even while in Glasgow, Michael was keeping at least half an eye on the Melbourne dining scene and emailed me this Broadsheet review of Maddox. They promised that "almost everything is, or can be vegan or vegetarian" so we stopped in for breakfast just hours after Michael touched down at Tullamarine.


The interior is unrecognisable from the premises' previous life as cheery-grungy Empire Cafe Gallery, with twee-er neutral tones and a wood-panelled kitchen. The clearly marked dietary options throughout the menu revealed lots for vegetarians, one vegan breakfast and mostly meaty gluten-free plates. 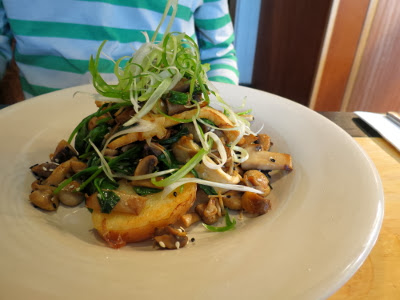 The notable exception is the sauteed Asian mushrooms with fried bean curd, spinach and crispy potatoes ($15), which ticks all three boxes! After adding extra salt, Michael was a happy gobbler of this dish - he thought it was better suited to lunch than breakfast but liked starting the day with tofu regardless. 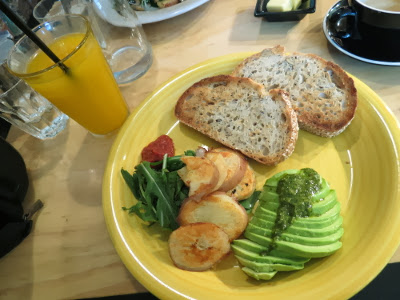 With the straight-up vegan options exhausted, I asked our waiter if I could tinker with their smoked salmon offering (usually $16) and they were happy to oblige. Hence I was treated to wholegrain toast, half an avocado with a coriander dressing, crispy potatoes, rocket and tomato relish (~$10). The chef provided some butter on the side, which I duly discarded because VeganMoFo. This was a really great breakfast, thanks primarily to a flawless buttery avocado with a light'n'tangy Spring dressing. 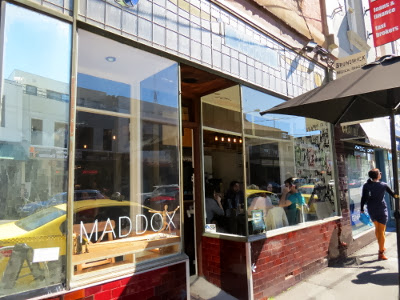 There's more to explore on non-vegan days - including a couple ways with eggs, some brioche French toast and a killer cake cabinet - but we didn't feel at all as if we were missing out or inconveniencing the staff in eating animal-free.
____________


Accessibility: Tables are closely packed but efforts have been made, including ramps replacing steps and a large unisex toilet with handrails. We ordered at our table and paid at a low-ish counter.