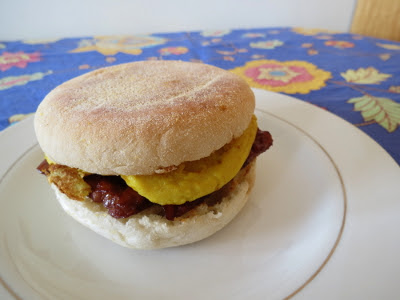 When we first moved to Melbourne, we really weren't expecting to settle in to our Carlton apartment for the long-haul. It's been seven years now and, after devouring all that the neighbourhood had to offer, we're finally moving on (don't worry, we're not going far!). Our current apartment has been the site of a few excellent vegan potlucks over the years (most notoriously Cindy's ice-cream themed birthday potluck, which left me with a massive sugar hangover), so we decided to throw a final celebratory potluck to say farewell. 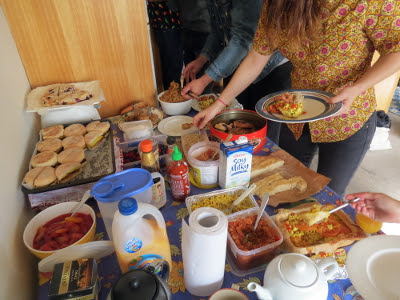 We went with a brunch theme and everyone came through with the goods - there were sweet and smoky baked beans from Johanna, a tofu quichey thing from Veganator, wondeful pastries from Vicki, spicy noodles from The Simple Eater, quinoa soy bombs from AOF, chocolate pudding from Lisa plus deep-fried amazingness (including Oreos!), berry cornbread, cauliflower curry and on and on and on. Incredible.

I decided to go for a veganised version of McMuffins, combining this brilliant omelette recipe with some old-fashioned tempeh bacon to create a salty, eggy treat. We originally talked about making our own muffins from scratch, but time got away for us (besides, the white-bread muffins we bought were probably closer in spirit to what Maccas serve up). 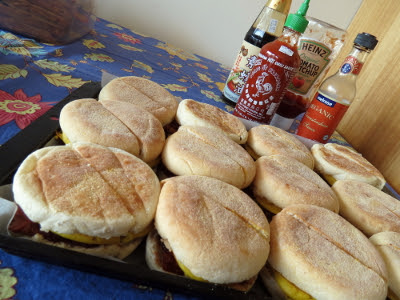 I realised too late that real McMuffins actually come with a soggy puddle of cheese on top of the bacon and egg, so these were even less authentic than you'd expect. Instead, we gave our guests their choice of sauces to slather on - my favourite combo was a generous squirt of tomato sauce with a drip or two of Sriracha. I was really happy with how these turned out - it's not actually that much work (or at least it wouldn't be if you were making four rather than twelve), and they really were fantastic. The ability of black salt to turn silken tofu + seasonings into something eggy never fails to blow my mind. I'll definitely be testing out the kitchen in our new place with a batch of these pretty soon.
Posted by Michael at 7:45 am