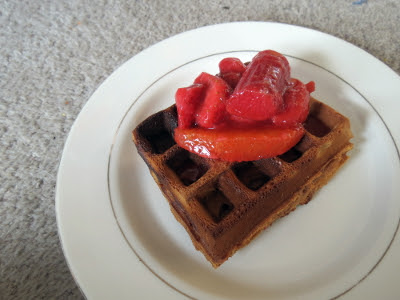 I could not let a brunch potluck pass by without making waffles. Keen for something new, I flipped open Vegan Brunch and landed on the gingerbread waffles - not only did they sound excellent, they'd clear my soon-to-be-packed-up pantry of treacle. While they were made of the right stuff - brown sugar and said treacle, fresh ginger and a touch of cinnamon and cloves - they didn't conjure gingerbread quite as I'd hoped. The cooked unevenly, with odd little black patches that were not charmingly caramelised; I also wonder if I would have preferred dried ground ginger to the fresh stuff. 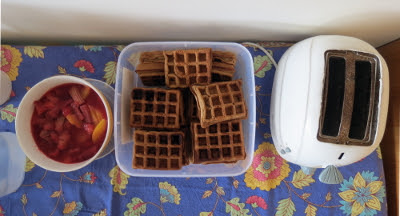 Still, they were waffles and they were abundant, cooked 14 hours in advance and served alongside a toaster for up-to-the-minute crispness and a bowl of stewed, ruby-hued fruits. A couple of crunchy rhubarb stalks aside these fruits were just what I intended, saturated with their own syrup and still holding their shape, pink sweetness spiked with almost-acid orange.

Ruby fruits
(an expansion of this recipe)


Wash and trim the rhubarb, then chop it into 5cm lengths. Wash and halve the strawberries. Peel and segment the oranges such that the pith and membrane are entirely removed (like this).
Place the rhubarb and sugar in a large saucepan. Stir them over medium heat until the rhubarb begins to soften around the edges. Stir in the strawberries. Continuing cooking, stirring occasionally, until the rhubarb is tender. Take the fruit off the heat and add the orange segments, and cool the fruits to room temperature.
Posted by Cindy at 9:45 pm