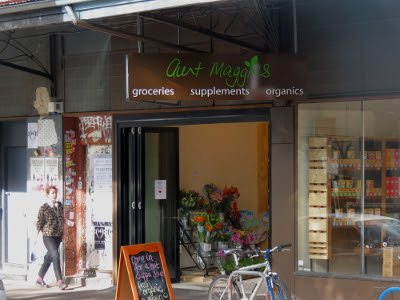 Three Thousand alerted me to the latest veg-friendly development on Gertrude Street - the opening of a Fitzroy branch of longtime southside favourite Aunt Maggie's. It's predominantly an organic grocery store, bringing an array of vegan friendly products to an area that's been surprisingly under-served since Organic Gertrude moved out to Fairfield six or seven years ago.
There's fresh fruit and veggies, lots of fancy teas, flours and other groceries and a couple of fridges loaded up with tofu, mock-meat, dips, the full Botanical range and heaps of other vegan and/or gluten-free goodies. 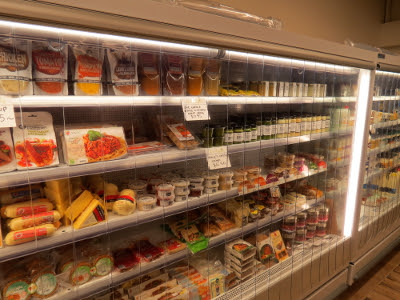 They also have a small juice bar and soup stand, which offers up three different organic and vegan soups for lunches. At $6 a pop it's probably the cheapest lunch in the neighbourhood, and my spicy red lentil soup was a rich and tasty treat - loaded up with beans, veggies and enough chilli to combat Melbourne's shift into single digit temperatures. There's a table you can plonk at, but it's served in a convenient takeaway cup and is just the kind of speedy, healthy lunch I can use when I don't have time for Sonido or Trippytaco. 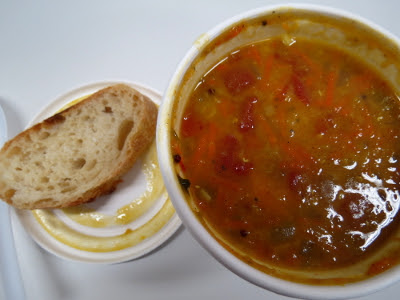 With just a handful of soups on offer, Aunt Maggie's is probably more exciting for its grocery range than its lunch options. Either way, it's a welcome addition to the Gertrude Street landscape.
____________
Aunt Maggie's

188 Gertrude Street, Fitzroy
9417 5504
veg soups: $6
www.auntmaggies.com.au (and their slightly more informative facebook page)
Accessibility: Aunt Maggie's has a flat entryway and is pretty spacious. The soup is ordered and served at a low counter, and then payment is via the checkouts.
Posted by Michael at 8:03 am