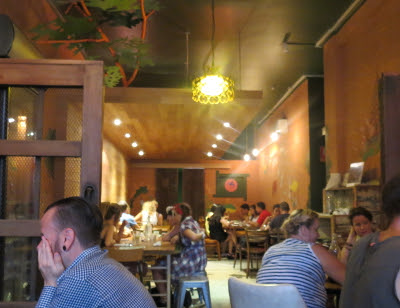 It's been two and a half years since we last wrote about Yong Green Food. We've stopped by often in the interim, happily witnessing it go from strength to strength, doubling its dining space last year and collecting numerous rave reviews from veg*ns and omnivores alike (see list below). 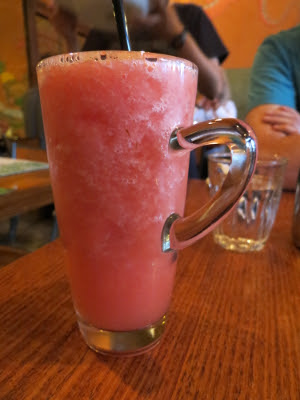 The menu's held fairly constant for a while but it's so lengthy and varied that it's yet to bore us. More than 90% of dishes are vegan and at least 50% are gluten-free, all clearly marked as such. Yong offer lots of non-alcoholic drinks - they're house-made and the prices show it, peaking at $9.50 for a large smoothie. I've given in several times this summer and splurged on the watermelon crush ($7.50). 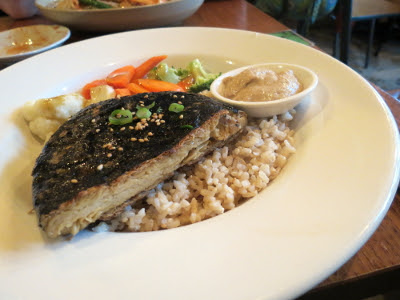 We rarely delve into the raw menu, although it attracts and excites many other diners. At $8.50-14.50 the snacks can seem steep, but I always consider ordering the tofu pocket platter (now $9.50). I've never tried the salads or noodles, though I still think the burgers and wraps are good value at around $10. Still, I most often find myself landing on the mains ($15-18.50). The bottom third of the page has a nice range of mock meat preparations served with brown rice and steamed (but cold) vegetables. These plates are filling but not heavy, and pleasingly balanced. The grilled king fish ($15, pictured above) might look a little processed but it has soft, flaky soy 'flesh' beneath the nori 'skin' and comes with a lovely miso gravy. 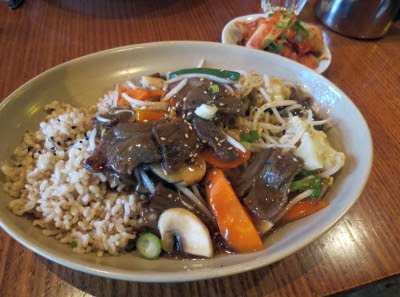 Most recently Michael checked out the Korean BBQ ($16.50), another dish where mock meat is balanced with brown rice and lots of veges. The bonus kimchi will likely earn this re-order status. 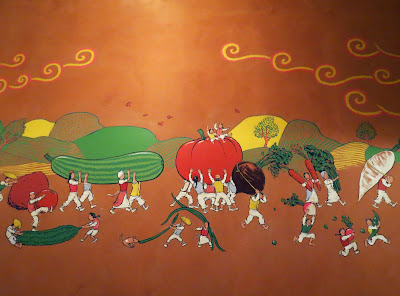 Yong is deservedly very popular. It can be noisy and only moderately well lit. We've found that the staff often look hurried, but they are always friendly. We were pleasantly surprised at how quickly these meals arrived after ordering. It's wonderful to see Yong really hitting its stride, delivering consistent high-quality food that satisfies all manner of Fitzroy diners.

Since that last post Yong has received near-unanimous accolades from veg*n (veganopoulous [one, two], I Am Woman, Hear Me Raw, melbourne with the rocket, easy as vegan pie [one, two, three], Vegie Mix, vegawesome!, Louise, by Degrees, In The Mood For Noodles, Ballroom Blintz, Learning to Raw, words@random) and omni (Suburban Culinary Adventures, Gastrology, Nikki Marie - Gluten Free, Naturopathic Eats, my mini manifesto, The tiny gastronomer, CAN LIFE GO ON WITHOUT BLOGS?, mochii eats, MEL: HOT OR NOT, I'm So Hungree, the indolent cook) blogs alike.
____________


Accessibility: Yong has a ramp in entry but the passage becomes narrow (it's noted on melbourne with the rocket that Yong is kid-friendly but not pram-friendly). The interior can be very loud. We ordered at our table and paid at a high counter. We didn't visit the toilets.
Posted by Cindy at 11:10 am