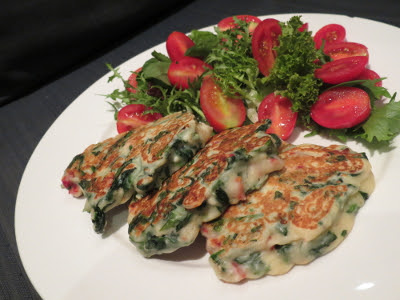 Though I was leaving it a little late, the last week of March was a good time to tackle the month's calendar recipe. It made good use of a fresh vegetable delivery, especially a big bunch of spinach and some assorted other greens.


We increasingly fall back on fritters to use up vege scraps, but I never think to combine them with ricotta as in this recipe here. I took the trouble to buy the proper stuff from a deli instead of a watery tub from the supermarket (and kept half of it aside for an upcoming recipe). I wasn't sure that it'd matter, all mixed up with flour and spinach and sun-dried tomatoes, but the quality ricotta really shone through. Not only did I eat the fritters bare of chutney, but I left the side salad undressed and wasn't left wanting for flavour or richness.


Bring a large pot of water to the boil and blanch the spinach for 30 seconds. Drain it and refresh with cool water. Squeeze out as much water as you can and finely chop the spinach.


In a medium-large bowl, whisk together the milk, eggs and ricotta. Stir in the flour and baking powder until well mixed. Fold in the spinach, semi-dried tomatoes, basil, salt and pepper.


Bring a frypan to medium-high heat and spray it with oil. Spoon about one-sixth of the batter at a time into the frypan, smoothing it out a little. Allow the fritters to cook for a few minutes on each side, until golden and cooked through.


Serve three fritters per person with mixed greens and grape tomatoes on the side.
Posted by Cindy at 10:38 am