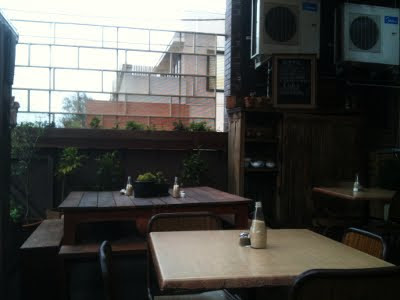 On Sunday morning I jumped on my bike early and hit Burnley for a 'fun' run. 10km and a fair bit of pain later, it was time to find some brekkie. For some reason, I've got a blind-spot when it comes to Richmond - I'm sure there are dozens of cafes around, but when trying to think of somewhere that would serve vegan breakfast for my running buddy Bec I was stumped. Luckily Bec had an idea - New York Tomato, which I'd never heard of, but which, it turns out, has an excellent reputation and supposedly some decent vegan options.

Although I didn't realise it at the time, New York Tomato's name comes from its location, the corner of New and York Streets in the back-blocks of Richmond (not sure where the 'Tomato' part comes from). At 9:30 in the morning things were just warming up, so we easily snared a table in the courtyard (the bitingly cold wind probably helped). The menu does suggest that they know what they're doing - vegan dishes are clearly labelled, as are vegetarian and gluten-free options. I considered the baked eggs or the carrot, chickpea and fetta fritters, before settling on the quesadilla (refried beans and cheese, topped with jalapenos, salsa, sour cream, guacamole and coriander pesto, $16.50). 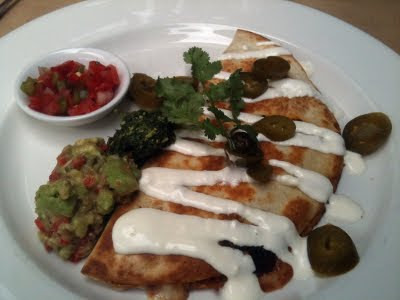 This was the perfect post-run breakfast, hearty and filling and loaded with spicy goodness. I could have eaten two. Unfortunately, the vegan dishes didn't fare quite so well, largely because the kitchen had run out of beans. It's clear that the cafe is trying to cater to vegans, but without the beans there wasn't much filling on offer.

The coffees were pretty good and the service was helpful and reasonably efficient. By the time we packed it in at about 11 the crowds had started to take over, to the point that people were having to queue for tables. There's no way anyone is just wandering by New York Tomato's location, so it's clear that they've won plenty of fans around the neighbourhood. It's pretty easy to see why - the space is lovely (and would be even lovelier if the sun was shining) and the menu is loaded up with delicious-sounding goodies. It's not cheap, but if you're in the neighbourhood, it's well worth a visit.


We're late to the New York Tomato party - Petit Miamx, The Very, Very Hungry Caterpillar , available all day, Once a Waitress, Chekoala, Ronnie's Spots, Let Me Feed You Melbourne, table to tummy, Yellow Eggs, melbourne gastronome, kate and zoe... and the kid, Do You Want to Stay for Breakfast?, Boobpop's Brunch Blog, Melbourne's bargain foodie, Gastrogasmic, Poppet's Window, food, glorious food, tell her she's dreaming and Adventures of Java Jane have all given it the thumbs up.


Accessibility: The courtyard has a flat entry and isn't ridiculously crowded. There are two more levels of tables up some stairs. The toilets (which I didn't visit) are on the top floor, so aren't particularly accessible.
Posted by Michael at 9:32 am