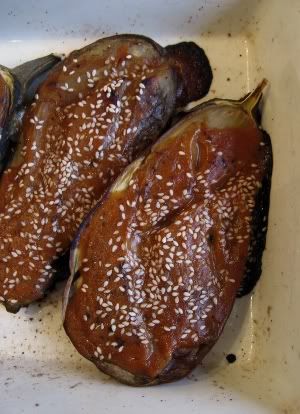 The miso eggplant that crowned our meal at Seamstress left both Cindy and I with a craving for home made nasu dengaku. We were inspired by our successes with Ottolenghi's eggplant recipe and decided to combine the basic premise from it with a miso sauce from Tammois' recipe book Gourmet Poverty.

We were biding our time, hoping that eggplants would turn up in our veggie box, but they just wouldn't come. Cindy put a call out on twitter, wondering whether organic eggplant was something that existed locally, and out of the blue The Quince Poacher offered up some her home-grown produce. Score! 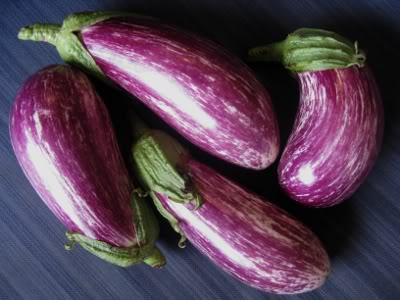 Look how beautiful they are! Thanks again Quince Poacher!

Our version of nasu dengaku turned out really well - we'll experiment a bit with the sauce in future, it turned out maybe a little bit saltier than we were shooting for and probably slightly too runny (although this was most likely due to our egg and dashi substitutions). But really it was a wonderful success - miso makes everything delicious. We need to use it more often.

The first step is to get the eggplant cooking. Preheat the oven to 180 degrees. Score the eggplant halves with some diagonal slices, brush them lightly with peanut oil, sprinkle with salt and pepper and then pop them in the oven - they'll cook for about half an hour.

While they're baking you can make the sauce. Get a double boiler going - we just use a saucepan on top of a slightly smaller saucepan that's full of water.

In the double boiler, combine the miso, sherry, sugar, mirin and the egg yolk substitute. Whisk them together thoroughly and cook them gently. Stir in the dulse/water mixture and keep it all simmering until the mixture starts to thicken up a bit. It's supposed to get to a custardy texture, but ours ended up a bit too liquidy - maybe we'll cut down the amount of water in the dulse mix next time.

Take the mixture off the heat. Pop the grated ginger in a piece of muslin (or a chux, which was what we used) and squish the juice out into the sauce mixture.

Check on the eggplants - when they're basically cooked and nice and soft, take them out of the oven. Slather on as much of the sauce as they can take and sprinkle on some sesame seeds before popping them back in the oven for another 10 minutes or so - you want the seeds to start to go a bit golden.

Serve however you like - we just had ours with plain rice and it was outstanding.
Posted by Michael at 1:49 pm