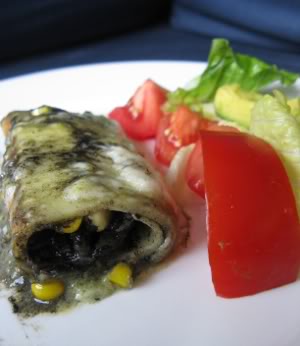 The first I ever knew of huitlacoche (or cuitlacoche) was seeing it a number of years ago in the Steve, Don't Eat It! blog series. The series' name should be the hint that it was not a positive mention - huitlacoche is a smut disease on corn and Steve was happy to play up this aspect, as well as its dark sludgy looks, for maximum disgust and entertainment.
More recently I noticed tacos de huitlacoche on the menu at Mamasita. While we didn't order them, it certainly opened my mind to huitlacoche's potential for deliciousness - everything else at Mamasita was great, after all! A week or two later I found myself discussing huitlacoche with a visiting Mexican colleague and others at the lunch table. He's a big fan it and pointed out that it's just a fungus, like mushrooms, right? And it's sometimes known as the Mexican truffle, such is its delicacy. The conversation concluded with an agreement amongst three of us to meet at the markets the following Sunday to shop and later prepare one of Pedro's favourite huitlacoche recipes. 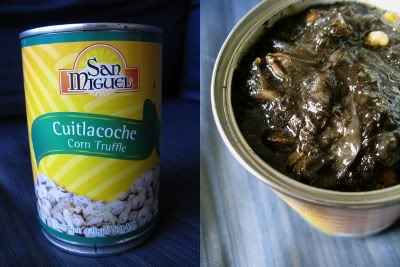 Huitlacoche is not as accessible in Australia as it is in Mexico or the U.S. Pedro has used it fresh and is accustomed to paying a few dollars for it in cans; here those cans cost $15 apiece at Casa Iberica. Thankfully that one can stretched to lunch for six. Its contents don't look particularly appetising, for sure, but few things do straight from the tin. There was onion and spices mixed in there, too, much like a can of refried beans (... which has to be the grossest thing straight from the can, right? It reminds me of pet food).
In Pedro's recipe, the huitlacoche is sautéed with green onions, fresh corn and ezapote and serves as a crepe stuffing. The crepes are smothered with a creamy poblano chile sauce and grated mild cheese and baked. We tentatively tasted them with a simple side salad. 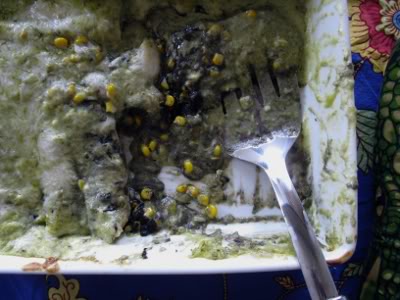 They were not a pretty picture, but they were pretty damn good. Though still deeply black and sludgy, the huitlacoche had a gentle earthy flavour boosted by the onions and complemented by the sweet corn kernels. I had to cordon off a serve in a plastic container for an absent friend before those present went ahead and finished off the whole dish.
By then we were all avowed fans of the 'hibernating excrement'! I'll definitely try using it again on my own. Working in the field of biosecurity as we do, we wondered whether this corn disease is present in Australia. Co-cook Yung tracked down a few interesting documents revealing that corn smut outbreaks have been recorded in Australia as early as 1911. There doesn't seem to be any hope for eradication and instead the corn "industry has learnt to live with the disease". Perhaps if more Aussies tasted Pedro's crepes they'd be even happier to co-exist with corn smut and it could support a small industry of its own.


Crepas de huitlacoche con salsa de chiles poblanos
(as shared by my colleague Pedro,
based on a recipe in A Taste of Mexico by Kippy Nigh)

Start with the crepes. Place the flour in a medium mixing bowl. Whisk in the eggs, milk and vegetable oil to make as smooth a batter as you can. Melt a teaspoon of butter in a small non-stick frypan on medium heat. Pour a quarter-cup of the batter into the pan, swirling it around to make a large, thin, circular crepe. Let it cook until the edges are dried out and it's just barely about to brown, then flip it over. Don't worry it they're not perfect, but try your best to keep them intact. When the crepe's done, set it aside on a dinner plate. Repeat with the remaining mixture and stack the crepes up on the plate - hopefully you'll make about 9 crepes all up.

When the crepes are done, get busy on the filling. Heat the oil in a large frypan over medium heat. Sauté the green onions until tender, add the corn and epazote, and sauté until the corn is tender but still firm. Add the huitlacoche and cook the filling, stirring occasionally, for about 10 minutes. Season to taste.

Set the filling aside and prepare the sauce. Blend the chiles and 1/3 cup milk, until smooth. In a medium saucepan over medium heat, melt the butter and stir in the flour to make a paste. Gradually stir in the sour cream and then the remaining milk. Add some salt, then cook and stir the sauce until it thickens. Add the blended chiles and cook the sauce gently for a further 5 minutes. Set the sauce aside.

Serve hot with a side salad.