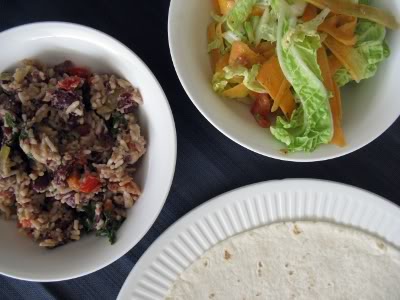 After gorging on Ottolenghi's recipes for a week or two, it was time to return to our other favourite cookbook - Viva Vegan. We've made this recipe for gallo pinto (Costa Rican refried rice and beans) a few times already, usually when Cindy's whipping up home-made tortillas. This time, we decided to go with lazy store-bought wraps (they're nowhere near as good!) and whip up a Viva Vegan salad instead.

The refried rice-bean combo is great - filling and hearty, with lots of garlic and spices to add a bit of punch (admittedly I usually pour on some Casa Iberica hot sauce to kick it up another notch or two). It's also pretty straightforward - much easier than making separate rice and bean recipes at least. We need to branch out a bit and try some other options from Viva Vegan, but this is so good that it's hard to make the effort.

The salad was a winner as well, a simple combination of crunchy cabbage and carrot with a tangy and garlicky dressing. Combine this with the gallo pinto on a burrito with hot sauce and avocado and you're basically in heaven.

Heat the oil and garlic in a big pot. When the garlic sizzles, throw in the onion, chilli and capsicum, and fry for 5-10 minutes, until the onion is soft.

Put the rice in and stir-fry for 10 minutes. Add the cumin, beans, stock, Worcestershire sauce, liquid smoke, salt and pepper. Stir well and mash the beans a bit (it's up to you how mushy you like them - I go for pretty mushy, Cindy would rather them mainly unsquashed).

Cook until the liquid is mostly absorbed - about 10 minutes. Kill the heat and stir in the coriander when you're ready to serve.

4 cups cabbage, finely shredded (due to availability constraints we used Chinese cabbage, which worked fine)
2 carrots, shredded (I reckon a peeler is the best tool to use for this job)
1 tomato, diced finely

Combine dressing ingredients in a blender and pulverise.

Stir together salad ingredients and toss with the dressing. Done!
Posted by Michael at 9:23 pm