We've been happily munching our way through some of the groceries that we bought at Minh Phat last month... 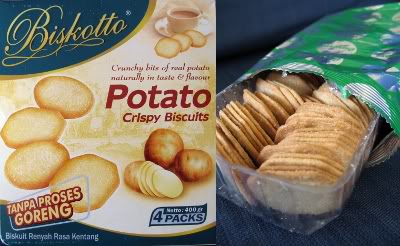 The potato crispy biscuits are goooood (if not good for you).  They're very much like the Potato In A Biskit snacks that I've grown up with, only a little smaller - crisp and mild in flavour, though still thoroughly enjoyable on their own.  I like crunching on a few mid-afternoon at work though I prefer not to team them with a cup of coffee, as suggested by the packaging. 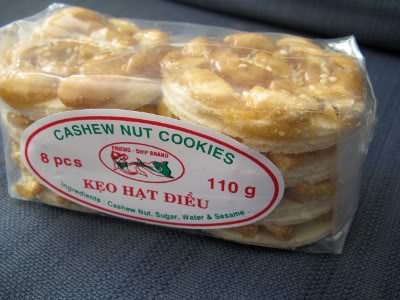 I really was not sure what to expect of the cashew nut cookies - South East Asian sweets often take me by surprise (... and then get me utterly hooked with repeated exposure).  Aside from the pretty display cookies on the top layer, they're actually wafer sandwiches: 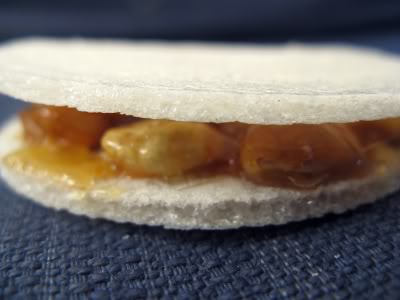 The wafers are tasteless and styrofoamy but the cashew-toffee filling more than compensates.  It's crunchy, but won't break your teeth; super-sweet but with a nice depth that comes from sesame as well as caramel.

The garlic crackers require a little more effort than just ripping open the packet, but they're sure worth it.  They're made of tapioca flour, garlic, salt and sugar and half a minute in hot oil transforms them into the vegan equivalent of prawn crackers!  I reckon these actually taste much better than their shrimpy counterparts - the garlic flavour is soft and savoury and unlikely to hound you for the rest of the day.  With only a fraction of the $1.80 bag needed per serve, they're mighty cheap too.

So our Minh Phat finds have all been great ones so far - I think I'd be most likely to buy the garlic crackers again in the future, though this bagful is likely to last us quite some time.
Posted by Cindy at 11:35 am