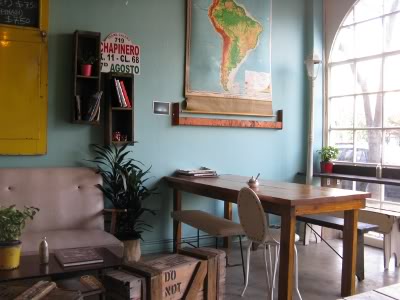 For years I've watched enviously while local bloggers with their fingers on the pulse rush out timely reviews of newly opened eateries, earning themselves kudos and links as far as the eye can see. So when I noticed a new cafe taking shape right near my work I started taking the camera to work with me every day so I could pounce and join this band of organised and well-connected food-hounds.

Sonido taunted me - opening a few weekends to test the waters and then remaining resolutely closed for weeks at a time (for a while I thought it was called 'Cerrado', which is actually Spanish for 'Closed'). Finally last week they threw their doors open for the workday trade, and I was quick to investigate. 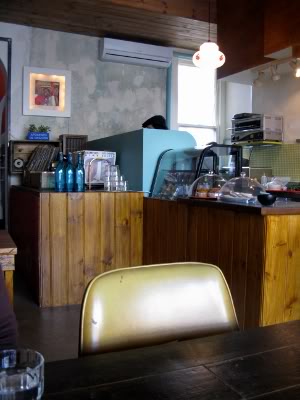 Sonido is run by a friendly Colombian duo, who've spent a lot of time fitting out what was basically a blank office space into a cute and welcoming little cafe. They make delicious coffee, offering a discount for those who bring their own cups instead of using the disposable takeaway cups and they have a small range of tasty looking sweets (including a gluten-free apple-crumble muffin that received a rave review from a coeliac colleague).

The lunch menu is short and focuses on Colombian specialities: empanadas and arepas. At the time of my visit they were still ramping up their range, and the beany empanadas I had my heart set on were not yet available. There were still a few vego options, and after some consideration I settled on a breakfast theme, going with a huevos arepa ($9.50). The arepas are all corn-based and thus gluten-free (although unfortunately, K, there's not a lot of vegan-friendly action at this point), and for a couple of bucks extra come with a tasty little side salad. 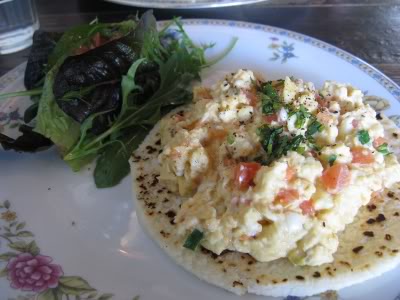 This was a tasty lunch, although it really would make more sense as a breakfast. The little tortillas are corny and delicious and the topping was light, fluffy and well seasoned. I probably should have drummed up some hot sauce to give it a little kick, but there was nothing sitting on the table and my laziness trumped by desire for spice.

Sonido is a fantastic addition to the frighteningly gentrified Nicholson Street end of Gertrude Street - there's even talk that they'll get a liquor licence soon so that they can do dinners and drinks, which may occasionally tempt us away from Radio as our after-work drinks venue of choice. For now they're focussing on food and coffee, and they've got a very receptive audience of locals hoping that they succeed.
Address: 69 Gertrude Street, Fitzroy
Ph: ? (this is the price of being first to review but hopeless with details)
Price: $7 - $11
Website: http://sonido.com.au/
Posted by Michael at 1:18 pm