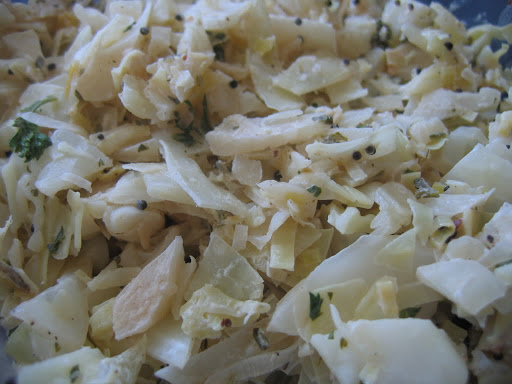 On our recent visit to Williamstown, I gamely invested in a new cookbook. I say 'gamely' because, unlike many food bloggers, I'm trying not to amass too large a collection of cookbooks. (I'm a rebel in a long family line of hoarders and feel guilty about owning anything that I don't actually make use of.) Besides, you may have noticed that the new dishes we prepare at home are more often inspired by other food bloggers than by anything printed on paper. So it's a high compliment that the anonymously authored vegie food took my fancy as I idly flicked through it in a gift shop.
Even more improbable than my impulse purchase of this book (no dessert recipes - can you imagine?!) was my first choice of recipe, a side dish of cabbage. While I've never hated cabbage as such, it's never really excited me either. But it seemed just the right combination of subtle flavour, fresh texture and nutrient richness to prepare alongside our two pies from TOFWD. This creamy cabbage was even tastier than I hoped - the gentle cooking toned down a texture that can be rubbery when raw, and the flavour was very savoury and buttery. Michael and I enjoyed this so much that we ate the leftovers with simple old toast the night after.
Creamy cabbage

In a large frypan, heat the oil and butter, then add the mustard seeds and cook until they pop. Add the leeks and cook them until softened, about 5 minutes. Add the cabbage, turn the heat down to low, and cook for a further 4 minutes until it, too, has softened.
Season the mix with salt and pepper, add the lemon juice and cream, then cook for a minute more. Finally, add the parsley and serve.
Posted by Cindy at 8:29 pm